Numerous questions and answers on this exchange deal with work done by friction; for example, see https://physics.stackexchange.com/questions/606270/where-does-a-torque-invoking-force-belong-in-work-energy-theorem?r=SearchResults&s=1|117.6805, and the answer by @user256872. As evident from these prior discussions, it is apparent that confusion remains about this issue. I think the earlier answer by @user256872 to this question provides the key for addressing this issue. Here, I will elaborate on this approach, and ask some follow-up questions. For simplicity, the discussion is restricted to the following conditions. I consider a rigid body in planar motion. I consider motion where either there is no fixed point for rotation, or the fixed point of rotation is the center of mass (CM); I do not consider rotation about a fixed point that is not the CM.

For a rigid body, there is no internal dissipation of energy and therefore friction does not cause “heating” effects; all the work on the body due to friction changes the total kinetic energy of the body. The total kinetic energy of the body is the kinetic energy of the CM plus the rotational energy about the CM: ${1 \over 2} mv^2 + {1 \over 2} I \omega^2$, where $m$ is the total mass, $v$ is the speed of the CM, $I$ is the moment of inertia about an axis through the CM, and $\omega$ is the angular speed about the center of mass. The motion of the CM is obtained by the first law: $\vec F = m \vec a$ where $\vec F$ is the net external force, $m$ is the total mass, and $\vec a$ is the acceleration of the CM. The rotation about the CM- even if the CM is accelerating- is obtained by $\vec \tau = I \vec \alpha$ where $\vec \tau$ is the net torque about the CM and $\vec \alpha$ is the angular acceleration about the CM. The work done (by all forces) equals the change in the total kinetic energy.

Consider a round body (sphere, cylinder, etc.) rolling down an incline, starting at rest, as shown in the following figure. 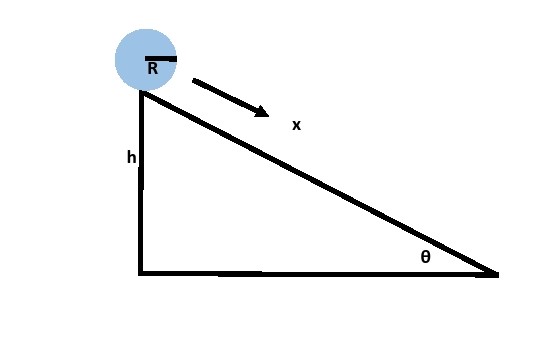 Next, consider the case where the body slips as it rolls down the incline. Here the force of friction does work, as sometimes explained by the fact that there is relative motion between the point of contact of the body and the incline due to slip. This case can be evaluated using the equations of motion; see Analytical Mechanics by Fowles, and also https://physics.stackexchange.com/questions/165453/tricky-conceptual-question-ball-sliding-and-rolling-down-incline?r=SearchResults&s=1|99.7707. For slipping, the coefficient of friction, $\mu$, must not exceed ${\tan\theta} \over{1 + (RM/I)^2}$, otherwise the body rolls without slipping. Solving the equations of motion, the time to reach the bottom of the incline $t_1$ is $\sqrt{{2h} \over {gsin\theta (sin\theta - \mu cos\theta)}}$ where $\mu$ is the coefficient of kinetic friction. The velocity $v$ of the CM at the bottom is $\sqrt{{2gh(sin\theta - \mu \cos\theta)} \over {sin\theta}}$, and the angular velocity $\omega$ at the bottom is ${\mu mgR \over{I}}\sqrt{{2h} \over {gsin\theta(sin\theta - \mu sin\theta)}}$. Using these results, the total kinetic energy at the bottom $1/2 mv^2 + 1/2 I \omega^2 = mgh - mgh {\mu cos \theta \over sin \theta} + {5 \mu^2mghcos^2 \theta \over 2sin \theta(sin \theta - \mu cos \theta)}$. The total kinetic energy at the bottom of the incline can also be evaluated considering the work done on the body, due to gravity and the two terms for the work done by friction. Using this approach, the total kinetic energy at the bottom for the case of sliding is $mgh -\int_{0}^{h \over sin \theta} F_{fric} dx + \int_{0}^{\theta_f} \tau_{fric} d \theta$. (Here due to slip $d \theta \ne dx/R$.) $\theta_f = {1 \over 2} \alpha t_1^2$ where $\alpha$ is the angular acceleration. $F_{fric} = \mu mgcos(\theta)$ and $\tau_{fric} = RF_{fric}$ are both constant. After evaluating the integrals, the total kinetic energy at the bottom is the same as previously evaluated using the equations of motion. Here, friction does work due to slip, because the portion of negative work on the CM is greater in magnitude than the portion of the positive work causing rotation about the CM .

As a trivial example, consider a pulley rotating about an axle fixed in the inertial frame through its CM, with mass $m$ and moment of inertia $I$, as shown the following figure. 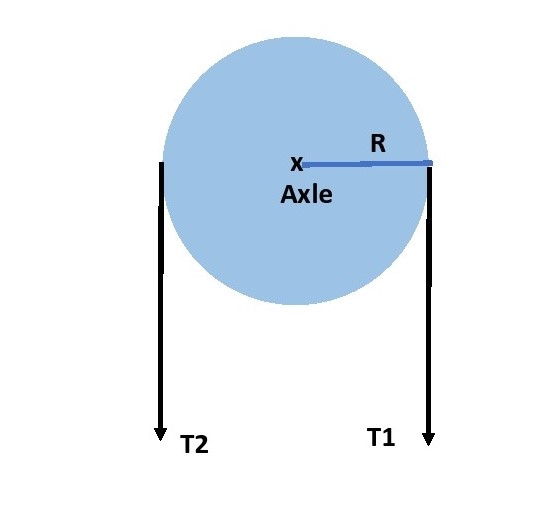 The rotation is due to unequal tensions $T_2$ greater than $T_1$ on a rope that causes rotation. The axle provides a force of constraint $\vec F_c$ upwards equal in magnitude to $T_2 – T_1 + mg$ to keep the CM fixed. Friction between the rope and the pully- assuming no slip- causes rotation, therefore the tension forces can be regarded as frictional forces on the pulley. Assuming no initial rotational motion, using the equation of motion for the pulley after time $t_1$, the total angular distance traveled is $\theta_f = {{(T_2 – T_1)Rt^2} \over{2I}}$, and the rotational energy is ${(T_2 – T_1)^2R^2t_1^2}\over {2I}$. Using the two-term relationship for the work by friction, the first term- for the kinetic energy of the CM- is zero since there is no motion of the CM due to the force of constraint. The second term is the kinetic energy for rotation about the CM up to time $t_1$ is $ \int_{0}^{\theta(t_1)} (T_2 – T_1)R d \theta = (T_2 – T_1) R \theta_f$. Using the earlier result for $\theta_f$, this is the same result as obtained from the equation of motion for rotation.

In conclusion, the work done by friction can be evaluated by segregating that work into two parts; this approach provides insight into the effects of friction on translational and rotational motion. Again, this approach is based on the earlier response by @user256872. Comments on this approach are appreciated.

Here are some questions to consider.

How can this approach for evaluating the work by friction be extended to general three dimensional motion of a rigid body where the inertia tensor is needed?

For a rigid body there is no “heating”, but in reality no body is perfectly rigid and friction causes “heating”, or more accurately an increase in the internal energy of a body. For a non-rigid body the relationship $\vec \tau = d \vec J/dt$, where $\vec J$ is angular momentum, used to describe rotational motion is no longer true, since this relationship is derived assuming a rigid body (see a physics mechanics text, such as Symon, Mechanics). Other questions/answers on this exchange and in the literature have discussed the difference between work as defined in mechanics (sometimes called pseudowork) as different from work as defined in thermodynamics. For fluid mechanics, if frictional heating does not cause an appreciable change in the temperature of a fluid, the Bernoulli energy equation can be modified to include a frictional “head” loss to account for friction; for an appreciable change in temperature, the evaluation is complex, requiring the first law, and momentum relationships. For the case of solids experiencing friction, is there an approximate approach (similar to the modified Bernoulli for fluids) that can be used? Where can we find discussions of how to evaluate frictional heating for solids using both an approximate and a detailed approach?

Browse other questions tagged classical-mechanics or ask your own question.

4
How can a rigid body's weight do work on it to make it rotate?
0
Tricky conceptual question: ball sliding and rolling down incline
3
Where does a torque-invoking force belong in work energy theorem?
2
Friction during rolling
1
Gravitational Potential Energy to Kinetic Energy
1
Why static friction does work on rolling bodies?

1
Expressing 3D orientation in alternative to Euler angles for 3D rigid body dynamics
6
How do we prove the existence of the instantaneous axis of rotation?
10
Proving that the angular velocity vector is equal to a limit involving the rotation vector
2
Helical motion of a rigid body
1
Rotational motion integration (Rigid body dynamics)
1
Torque and Angular Momentum for point particles