How does the eye perceive a real image?

Okay, so I'm trying to grasp how the human eye will perceive the real image created for example by a convex lens. Take the upper image in this picture for example. 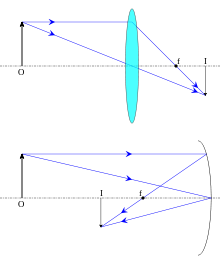 If I stood much farther away, would I see a "virtual image" (I know it wouldn't actually be virtual), that is would it look to me as if the object actually was in the focal plane, and was of the size of the arrow in it?

But when I say "fuzzy", it just means that the location on the retina depends on which direction of a photon from O you trace. If you only trace one particular photon, you will of course see one particular pixel through the retina. However, because the picture is fuzzy i.e. the activated retina pixel depends on the direction of the photons you trace, you can't talk about "apparent size" because to talk about the size, you need particular points of O to be associated with particular places of the retina which ain't the case if the picture is fuzzy (and if you pick particular photons from points of O, there's still no way to define which directions you mean for all points of O simultaneously).

The situation is analogous if you're in the focal plane of the convex mirror. You still see convergent light rays.

To understand how you actually see something you just need to know that the eye is basically a lens and a screen (i.e. the retina) and the focal length of the eye is around 22 mm, though you can change this. So to understand what you see in your diagram above just include the eye:

Knowing $u_1$ and the focal length of your lens you calculate the position of the image, $v_1$ using the lens equation. Now knowing where your eye is you can calculate the distance from the image to your eye, $u_2$, and use the lens equation again to calculate where the image created by your eye appears. If it appears on the retina, i.e. $v_2 \approx$ 22 mm, then you will see a sharp image of the image. As $v_2$ increases or decreases away from 22 mm the image doen't fall on the retina and your view will be increasingly out of focus.

In the specific example you mention, where you put your eye exactly where the image is, the value of $u_2$ will be zero. You can't calculate $v_2$ from this because you can't calculate the reciprocal of zero, but you can make $u_2$ small and see what happens as it approaches zero. If you do this you find that $v_2$ is also small and negative (i.e. a virtual image), and also approaches zero. So there is no image on the retina and therefore you wouldn't see anything (except a bright blur).

In order to see the image you'd need to move your eye far enough back to generate an image on the retina. In practice the limited ability of the eye to adjust it's focus means $u_2$ will need to be no less than 10 cm or so, i.e. your eye would need to be at least 10 cm away from the position of the image.

Not the answer you're looking for? Browse other questions tagged geometric-optics lenses or ask your own question.

3
Can we see a real image with naked eyes?
6
Real images and their formation

0
Seeing the image as explained by Geometrical optics?
0
Does a magnifying glass always make image at least distance of distinct vision?
1
Can a convex mirror form a real image?
0
How does a diverging lens in a Galilean telescope form an image at infinity when its object is at its focal plane?
4
Why do we see a blurred image when the screen is not placed at the position where the image is formed by a convex lens?
1
How to think about virtual images?