Two protons moving in opposite directions. Special relativity and electromagnetism

Imagine two protons moving in the opposite directions with a velocity $v$ or $\beta c$, where $\beta = v/c$. At $t = 0$, they are a distance $r$ apart one along the same line (see the picture). I am having troubles deriving the exact relation between electric and magnetic forces (or fields) in this case. 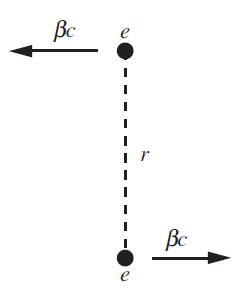 It was pretty straight forward to derive this relation in case of protons moving along. The example of the derivation can be found in the answer to the following post:

The conversion factor is $F_{magnetic} = \beta^2 F_{electric}$ The only difference is that in my case I use total force transformation explicitly ($F_{\text{in stationary frame}} = F_{\text{in moving frame}} / \gamma $) instead transformation of fields as given in the answer.

My solution is then the following:

To find that field we first need to find the velocity of the 2nd (upper) proton in rest frame of the 1st. From relativistic velocity addition we get:

3) Since we know that both magnetic (from considerations in the beginning) and electric forces will be repulsive, then:

4) From result of two protons moving in the same direction, we know that factor should be $\beta^2$, therefore, it should be that:

When trying to reduce right hand side I arrive at $-\sqrt{\beta^2 + 1}$ instead of $\beta^2$. I even tried to use the help of SymPy expression simplification functions, but same result. Have I made a mistake in the reasoning or in simlification of the final expression?

P.S. Here the conversion factor between the forces is derived by explicitly assuming magnetic field form.. But I am interested how it can be derived using relativity.

EDIT: Was just an annoying mistake in the calculations. everything works.

For whoever may struggle with the same problem:

Substituting back into the expression:

Not the answer you're looking for? Browse other questions tagged electromagnetism special-relativity magnetic-fields electric-fields reference-frames or ask your own question.