Can a dot of light travel faster than the speed of light? [duplicate]

Say I have a laser. If I spin the laser so that the beam sweeps in an arc along a very distant object, could that dot travel faster than the speed of light? 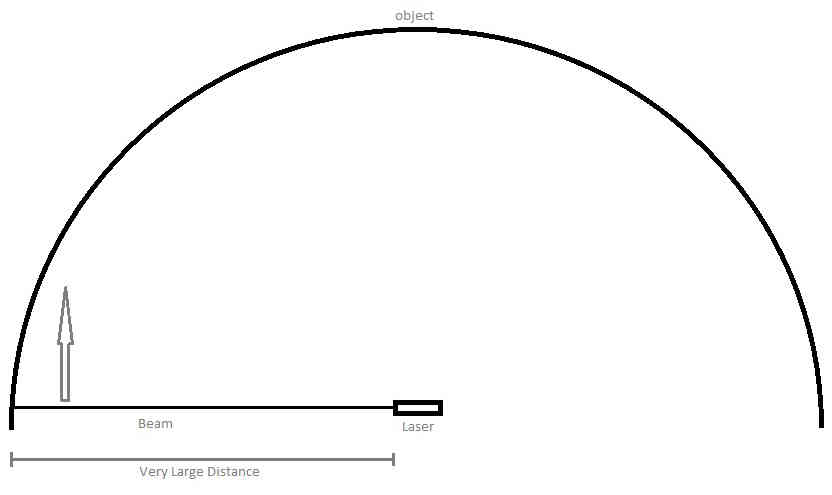 Yes, the dot would travel at a speed faster than light. Firstly, note that this wouldn't be immediate. if $r$ is the radius of the arc, it would take $\frac r c$ time before the dot started moving (in the meantime, the beam of light, if "frozen" in time1, would look bent from most reference frames)

This doesn't violate causality. Why? Because the dot cannot relay information along the arc. The motion of the dot is controlled by the person at the center, and he is the only one who can send information by moving it. Since there is a delay of $\frac r c$ seconds before the dot moves, this is perfectly in line with causality.

Remember, the dot isn't a physical object. It's a certain area having some properties (point of intersection of distant object and laser beam)

A simple argument to justify that the dot will go FTL:

At time $t_0$, I shine my laser pointer at point A, on the left of the arc. I sweep it around, and at time $t_1$ it points towards B on the opposite end of the arc. Note that in my reference frame, $t_0$ and $t_1$ can be quite close, while $r$ can be arbitrarily large.

So now, the dot has crossed a distance of $r\theta$ in a time $t_1-t_0$. Note that $r$ can be arbitrarily large, and $t_1-t_0$ is only constrained by the rate of production of photons. Which means that we can cover an arbitrary distance in a fixed time interval, so there will be some $r$ for which $\frac{r\theta}{t_1-t_0}>c$.

1. To specify "frozen in time" rigorously: let there be an array of photon detectors. They are synchronized such that they will all record the existence of photons simultaneously in some given reference frame (the frame of the laser pointer or the frame of somebody on some given point on the arc). Now, if that person checks which detectors have recorded a photon, he will get a curved locus.

Yes, it can travel faster than light, but it is not a physical object, merely the locus of intersection of the beam and the screen, so no violation of causality is achieved.

Not the answer you're looking for? Browse other questions tagged visible-light speed-of-light faster-than-light or ask your own question.

39
Is it really possible to break the speed of light by flicking your wrist with a laser pointer?
31
In superluminal phase velocities, what is it that is traveling faster than light?
4
Diameter of the universe
0
Could the shadow move with faster-than-light speed?
1
Can light projection on a wall travel faster than the speed of light?