What do atomic orbitals represent in quantum mechanics?

I am learning the basics of quantum mechanics and am familiar with the Schrödinger equation and its solution, but I was confused about what the familiar atomic orbital shapes represent?

Do they represent nothing physical and are just plots of the wavefunction in 3D polar co-ordinates? Or do they represent the region where probability of finding an electron is $90\%$? Or something else?

Wikipedia instead states that

In atomic theory and quantum mechanics, an atomic orbital is a mathematical function describing the location and wave-like behavior of an electron in an atom. This function can be used to calculate the probability of finding any electron of an atom in any specific region around the atom's nucleus. The term atomic orbital may also refer to the physical region or space where the electron can be calculated to be present, as predicted by the particular mathematical form of the orbital

(Disclaimer: I am only a highschool student and have learned the following mostly on my own. If there are any mistakes, please feel free to correct me!)

An atomic orbital represents the probability distribution* of the location of an electron around the nucleus and is mathematically described by a wave function.

Now what does this mean? Let's start with what an atomic orbital isn't:

So what is an atomic orbital? 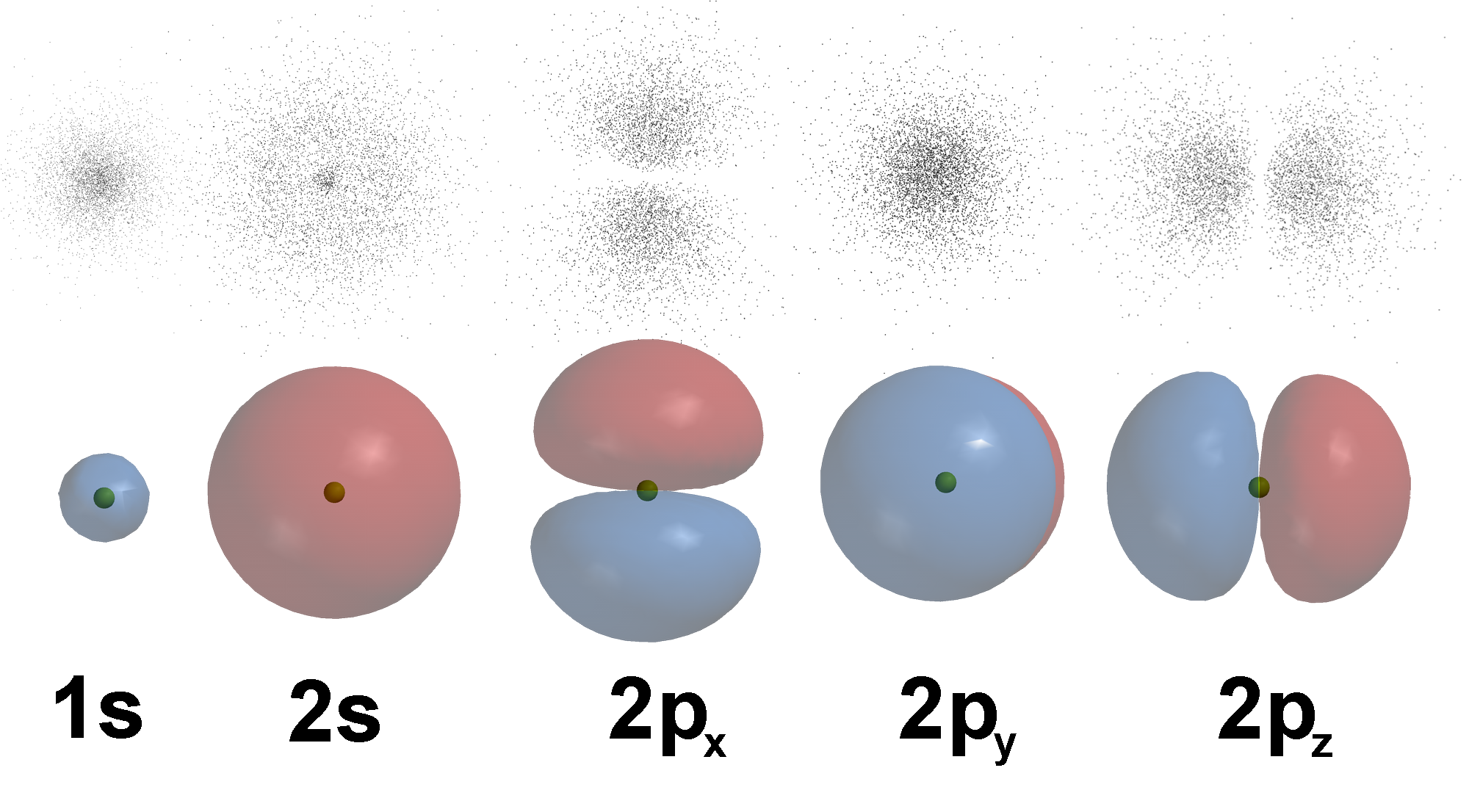 So the shapes of the orbitals as they are most often depicted is usually chosen in such a way that the probability of finding the electron inside this shape (when measuring its position) is at least 90%. However, note that the electron is not constrained to this shape and there is a probability that it is measured outside.

There are some other things to mention about orbitals apart from their "shape". One of these is that every orbital has a certain energy level associated with it. This means that when an electron is in an orbital $A$ it has the exact energy associated with $A$.

If there is another orbital $B$ with higher energy level than $A$, the electron in $A$ can "jump" to $B$ if it absorbs the exact amount energy which is the difference between the energy levels of $A$ and $B$. The most common example is an electron absorbing a photon which has the wavelength that corresponds to the energy differents of the orbitals. Likewise, electrons can jump to an orbital with lower energy by emitting a photon with the wavelength corresponding to the difference in energy between the orbitals.

Here is a graph showing the relative energy levels of some atomic orbitals: 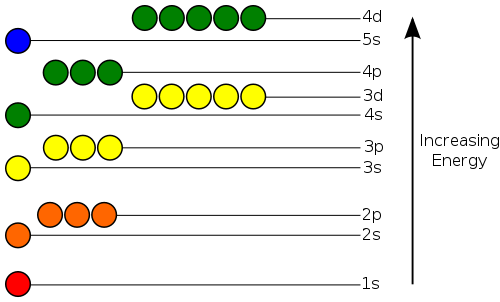 I hope this somewhat clears up the confusion.

Let me split up your sources into Levine

as well as Wikipedia part 1

In atomic theory and quantum mechanics, an atomic orbital is a mathematical function describing the location and wave-like behavior of an electron in an atom. This function can be used to calculate the probability of finding any electron of an atom in any specific region around the atom's nucleus.

The term atomic orbital may also refer to the physical region or space where the electron can be calculated to be present, as predicted by the particular mathematical form of the orbital.

With this in place:

In introductory texts it is sometimes useful, for didactic purposes, to identify the orbital with this spatial region, and you can sometimes get relatively far on this notion, but it is important to keep in mind that this is a 'lie to children' and that in the full theory 'orbital' implies a wavefunction.

If you take any linear solution $\Psi(r,\theta,\phi)$ to Schrödinger's Equation in 3 dimensions (spherical coordinates $(r,\theta,\varphi)$) and a probability $P = \vert \Psi \vert^2$, representing the wave function of your atomic orbital, you can "split it" in both radial and angular functions:

(note that $R$ and $Y$ implicitly depend on atomic numbers, so are different for different atomic orbitals).

evaluated and plotted in spherical coordinates around your atom.

It's important to note the atomic orbitals are approximations. In the context of the basic hydrogen atom Schrödinger Equation, they are exact eigenstates of energy, total angular momentum squared, and $L_z$, where $z$ points in any direction you want it to.

As energy eigenstates, they are stationary states, and their time evolution involves a global phase rotating with frequency $E/\hbar$. As such, they can never change, which obviously contradicts experiment. Call this "problem 1".

Also: in quantum mechanics, the electron is a point particle. This leads to problematic interpretations that have their uses, but are not fundamental. One of these interpretations is that electron moves randomly in a fashion that has it inside an orbital boundary 90% of the time. Call this "problem 2".

The wave function then represents the complex quantum amplitude, whose modulus squared is the probability density of the electron's location. There really is no intuitive (or classical) way to understand coherent complex amplitudes of fermion fields, other than it's kind of like how we treat light...but with conserved quantum numbers, antiparticles, and Fermi-Dirac statistics.

The quantum field treatment also applies to the electromagnetic field, which then adds an interaction term to the hamiltonian, and allows transitions between states. It also adds virtual electron positron pairs to the binding, and that's only at the 1st order. The actual complexity of the state is beyond calculation.

With that, I would say the wave function is a mathematical approximation to something physical. I do believe this conundrum is the origins of Feynman's two famous quotes on quantum mechanics:

" I think I can safely say that nobody understands quantum mechanics."

Not the answer you're looking for? Browse other questions tagged quantum-mechanics wavefunction atomic-physics schroedinger-equation orbitals or ask your own question.

0
Do I get shells, subshells, and orbitals right?
0
Electrons in the quantum mechanical model of the atom
37
What is the probability for an electron of an atom on Earth to lie outside the galaxy?
42
Do electrons really perform instantaneous quantum leaps?
23
Is there experimental verification of the s, p, d, f orbital shapes?
17
Are orbitals observable physical quantities in a many-electron setting?
7
What exactly is the "energy" of an orbital?
5
Is there any significance of atomic orbitals?
4
What is the difference between real orbital & complex orbital?
0
How to correctly imagine a quantum particle, what does it look like?
See more linked questions

3
Is it that electron of an atom can be found anywhere in the space?
5
Is there any significance of atomic orbitals?
8
Can I steal your electron?
7
Where do symmetries in atomic orbitals come from?
13
Is there actually a 0 probability of finding an electron in an orbital node?
2
Change in shape of Atomic Orbitals
8
How do orbitals exist in an atom?
0
Quantum mechanics: orbitals with opposite signs in the magnetic quantum number
1
Quantum model of the atom