Why is the air inside an igloo warmer than its outside?

An igloo is not only used as shelter from snow but also to keep warm. Perhaps, a simple igloo is made of ice and nothing else still, why is its interior warmer than the exterior?

An igloo is not made from ice, but made from compressed snow. Snow is basically semi-frozen water or frozen crystalline water.

Contrary to intuition, snow has actually got very good insulating properties. Solid ice on the other hand, is not a good insulator compared to compressed snow. This is because ice is actually solid but snow is filled with minute pockets of air. While snow on an igloo does indeed look solid, up to 95% of it is actually air trapped inside minute crystals. Because this air cannot circulate much inside these ice crystals, heat becomes trapped inside it.

Some engineering also goes into the design of the inside of an igloo. The inside is divided into levels, where the upper level is for sleeping, the middle one is for fire and cooking (yes, fire! and a little hole is built into the top of the igloo to prevent smoke inhalation) and a lower level is used as a sink for cold air. As we know, heavier colder air naturally drops, and since the lowest level is where the door is placed, this cold air stays there. And warm air which rises, collects where it is mostly needed - in the eating and sleeping levels. Also, since the entrance to the igloo is at the bottom part - the tunnel to crawl through whilst entering or exiting the igloo - freezing air cannot blow directly into its interior.

All of this can be explained if we consider heat transfer and convection. This is a process whereby when a fluid moves, it transfers heat along with it. When this fluid is stationary, it will transfer heat by thermal conduction which is the transfer of heat from one body to another when they are in contact. You can see an example of this when you touch an ice cube and seeing it melt right where you fingertip is. But the more a fluid moves, the greater is it’s Reynolds number since the flow patterns become more unpredictable. The greater the Reynolds number, the more heat transferred via convection. And because snow has a low thermal conductivity, as mentioned above for air and how the snow contains air pockets, an igloo stops the heat transfer into its outside surroundings. The compressed snow and stationary air both act as surprisingly effective insulators.

Although igloos are often associated with all Inuit and Eskimo peoples, they were traditionally used only by the people of Canada's Central Arctic and Greenland's Thule area. Other Inuit tended to use snow to insulate their houses, which were constructed from whalebone and hides. Snow is used because the air pockets trapped in it make it an insulator. On the outside, temperatures may be as low as −45 °C (−49 °F), but on the inside, the temperature may range from −7 to 16 °C (19 to 61 °F) when warmed by body heat alone.

Certainly they would use fire to heat also.

The crucial concept is that snow is an insulator.

Because it is heated up from the inside by people (or possibly small fires).

The snow walls work as a thermal insulator to the outside.

You are asking why it is warmer inside the igloo then outside.

Some experts say that a well-constructed igloo, coupled with a very small oil lamp and plain old body heat, can warm an igloo up to 40 degrees above the outside temperature. Hypothetically, if it is -40°C outside, the igloo has the potential to warm up to 0°C. It accomplishes this amazing feat thanks to several features: 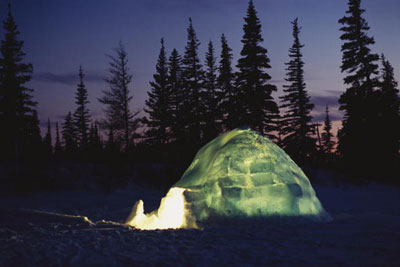 You can see on the image an igloo illuminated by fire.

There are several reasons:

The inside of an igloo is NOT warmer than the outside, it is merely very well insulated from the outside air.

It is only when you place a source of heat inside the igloo, such as a 300w "human body" brand heater or a 500w "oil lamp" class heater that the inside air will warm up.
Then, of course, this warm air stays warm because the snow (not ice) that the Igloo is build out of is a very, very bad conductor of heat.

Not the answer you're looking for? Browse other questions tagged thermodynamics temperature ice weather or ask your own question.

4
What made aerogel so insulating?

14
Which would melt faster on the sidewalk, equal volumes of snow or ice?
1
Does a warmer body and warmer surroundings cool faster than a cooler body and surrounding with equal difference in temperature?
2
Why greenhouse's inside temperature never been infinitely hot?
41
Why do small patches of snow remain on the ground many days or weeks after all the other snow has melted?
65
Why was water freezing almost instantaneously when shaking a bottle that spent the night outside during a frosty night?
17
Why do fruits left to dry in the sun feel so much warmer to the touch than other objects outside?
0
Why is my watter bottle wet after the water inside it unfreezes?