This is a mathemetical question with perhaps a physical interpretation.

using spherical coordinates $(A_r, A_{\theta}, A_{\phi})$. The form of the rotation $\vec{\nabla} \times$ in spherical coordinates can e.g. be found on wikipedia.
This gives 3 differential equations and I just wonder whether they can be solved?
I was under the impression that there would be plenty examples, but I cannot find any.
The equation could perhaps be considered to be the vector potential of a hypothetical magnetic point-monopole.

Describing a magnetic monopole is a problem in Classical Electromagnetism: essentially, if you have a magnetic monopole, then $\nabla \cdot \mathbf{B} \neq 0$, meaning that we can no longer define a vector potential $\mathbf{A}$, since -- if you remember -- it was precisely the fact that the divergence of $\mathbf{B}$ was always zero in Maxwell's Equations that allowed us to write $\mathbf{B = \nabla \times A}$.

Dirac came up with a solution for a monopole (described in an accessible way here), but it came with it's own "problems": unlike an electric monopole which is only singular at a single point ("$r=0$"), the "magnetic monopole" solution turned turned out to be singular along an infinite line. (It turns out there are two ways to see this, either as a "succession" of dipoles (left), or a tightly wound semi-infinite solenoid (right), both stretching off to infinity, as shown in the figure below. See Jackson's Electrodynamics "6.11 On the Question of Magnetic Monopoles" for more details, and a complete description of the image below.) 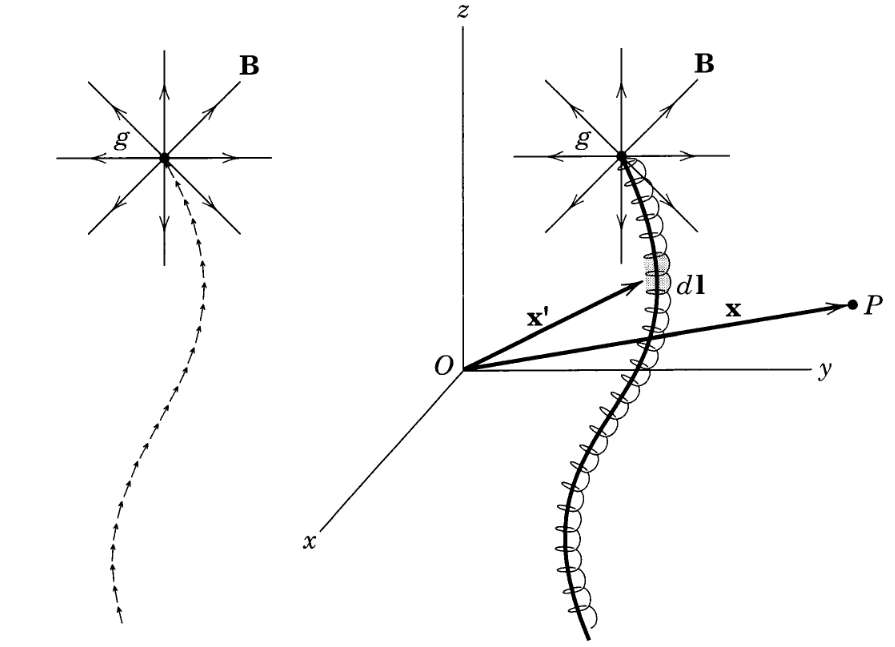 A system like this cannot be described by one single vector potential over all space, precisely because it is singular in this fashion. However, it turns out that one can define a vector potential that describes nearly everywhere in space (except along the monopole itself).

but it is singular along the line $\theta = \pi$, which is the "direction" we assume the monopole to be in. Such a singularity is known as a "Dirac String". You can read up more about it here. (The actual argument is a little more involved, it contains two "patches", one for the upper hemisphere and one for the lower one, depending on where the point you're considering is positioned and so on, but it's a little too involved for this discussion. You can find more about it online if you're interested.)

One of the curious results of Dirac's monopole was that he showed that if even one magnetic monopole existed in the universe, it would explain why charge was quantised. Which is cool...

Apply the divergence operator $\nabla\cdot$ on both sides of OP's eq. (1). The left-hand side vanishes identically, but the right-hand side is proportional to the 3D Dirac delta distribution. So OP's eq. (1) is inconsistent at the origin.

Not the answer you're looking for? Browse other questions tagged electromagnetism magnetic-fields potential vector-fields magnetic-monopoles or ask your own question.

7
Electron in the proximity of a magnetic monopole
5
Calculate electric field induced by a changing magnetic field
2
Calculating electric field using a given magnetic field equation (Maxwell-Faraday law)
0
Vector Identity using Coulomb Gauge in Stancil and Prabhakar's 'Spin Waves'
2
How to calculate spherical coordinate components of dipole field?
1
Vector potential of magnetic monopole
3
Is the vector potential component $A_\phi$ for a dipole necessarily 0 due to symmetry about the $z$-axis?
0
Deriving the Biot-Savart Law from the Helmholtz theorem?
0
How to find the potential 4-vector in a curved spacetime context?