Feeling heavy in an upward accelerating elevator - is it a pseudo force?

In an elevator accelerating upwards, a person weighs "heavier" on a scale. The normal force can be expressed as $N=m(a+g)$, a being the upward acceleration. In this case, is $ma$ a fictional force in the non-inertial frame of the elevator or the person standing in the elevator? It seems to me that from an inertial reference frame, the Normal force calculated would be the same, however, this doesn't seem to fit with the rule that "fictitious" forces cannot be included in calculations in inertial frames. In this case, is this purely a coincidence?

Short version: Yes. Any "force" that acts on masses because of the acceleration of the coordinate frame in which it is measured is a pseudo force.

"Pseudo" doesn't mean "not real." It's more like, "not explained." The contact force between the passenger's feet and the floor of the elevator is real no matter how you look at it. "Pseudo" merely means that in the accelerated frame, we don't attempt to explain the origin of the force. It's just a physical law within the accelerated frame that a body experiences a force in a certain direction with a magnitude proportional to the body's mass.

You said, $N=m(a+g)$. That would be how we describe it in the inertial frame. When we talk about the inertial frame, we have to understand what $a$ and $g$ mean. Especially, $a$, which we know in this case to be the acceleration of the "elevator."

In the accelerated frame, we don't need the complication of $a+g$. We can just collapse that into a magic constant, $k$. Things inside the elevator experince a mysterious (i.e., "pseudo") force, $\vec{F}=m\vec{k}$ where $\vec{k}$ is just a given fact of how things behave in that system. We don't acknowledge that the elevator is accelerated, we don't ask why $\vec{F}=m\vec{k}$, we just say that's the law that describes how things are in the elevator.

Suppose you are the observer.

If you observe the person going up from the frame of that same elevator then according to you , the person is at rest. The forces on that person are : Normal force (upwards), fictious and gravitational force (downwards).

Since the person seems to be at rest for you then Newton's second law says that the net force on that person should be zero i.e

If there is a weight scale on the floor of the elevator, the force on the scale is equal in magnitude to the normal force on the person (Newton's third law) and in either frame that force is $mg + ma$ in magnitude; the weight is greater than that of a person on the ground where the force on a scale is $mg$. (This ignores the effects of the earth's rotation. You actually weigh a little less at the equator than at a pole due the centrifugal force.)

See a physics mechanics text, such as Symon Mechanics for a complete discussion of moving coordinate systems.

No matter which reference frame you use, the normal force is always $N=m(a+g)$.

In the non-inertial reference frame we believe the person is in equilibrium, so we expect the net force on them to be $0$. To achieve this we have to introduce a pseudo-force $F_p$ downwards, so that $N - mg - F_p = 0$. From this equation we can see that $F_p=ma$.

Note that the person in the lift does not feel the pseudo-force. Neither do they feel the force of gravity. If they jump off a tall building or go to the ISS then they feel "weightless" because there is no normal force - even though gravity still acts on them, they do not feel it. The only force that they feel in the lift is the normal force $N$ from the floor of the lift. Since they are used to $N$ being equal to their weight, they interpret a higher value of $N$ as being due to a temporary increase in weight, whereas in fact their weight is unchanged.

Let's take a look at the elevator and the person standing on it from an inertial frame of reference, the ground frame.

Now, If you draw the free body diagram for the person in the elevator (which is say accelerating upwards with acceleration $\vec{a}$) from this frame you will see that the person experiences a Normal reaction $(\vec{N})$ upwards from the floor of the elevator and the gravitational pull $(m\vec{g})$ in the downward direction.

Now on to your questions :

In this case, is ma a fictional force in the non-inertial frame of the elevator or the person standing in the elevator?

ma is a fictional force from any of these two frames since, both will be accelerating with the same acceleration.

however, this doesn't make sense as these forces are named "fictitious" forces and cannot be included into calculations in inertial frames.

Here, in your above mentioned scenario, the so called "fictitious" force is nothing but the feeling that one experiences when in a elevator which is accelerating upwards. You will indeed feel like the elevator is pushing on your feet, when it is accelerating upwards. And Newton's laws will indeed take care of the so called force in an inertial frame, as that fictitious force just simply equates to the net force ma, experienced by the person in the elevator. 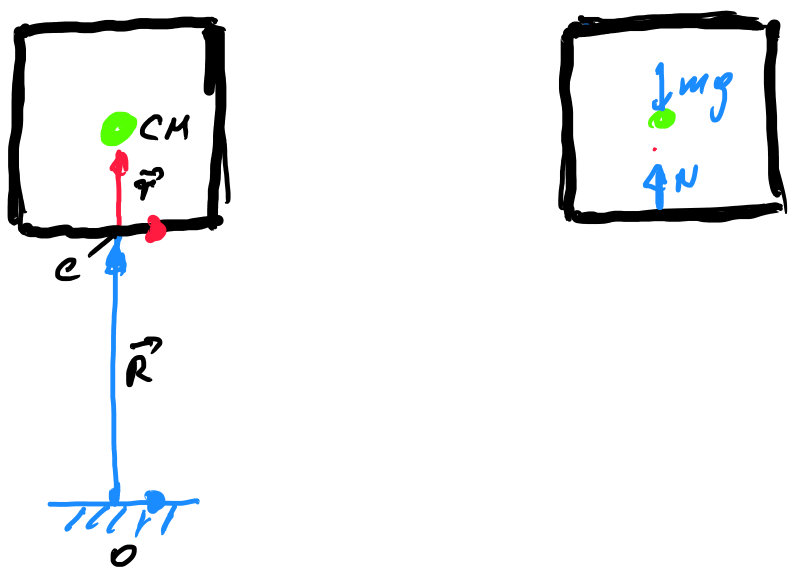 Yes the increase in weight is due to pseudo force

Hence the person feels a force in the downward direction, increasing the apparent weight and thereby create an illusion of increase in weight

Not the answer you're looking for? Browse other questions tagged newtonian-mechanics reference-frames acceleration inertial-frames or ask your own question.