What causes a soccer ball to follow a curved path?

Soccer players kick the ball in a linear kick, though you find it to turn sideways, not even in one direction. Just mid air it changes that curve's direction, i.e., it swings, as footballers say. Is there any physical explanation?

Maybe this video will better emphasize this phenomenon: http://www.youtube.com/watch?feature=player_detailpage&v=ZEv7QEFNVq0#t=265s

There's an interesting paper that discusses some of the physics/maths involved in the spiral path of a football. Here's Roberto Carlos' goal against France (discussed in comments to question). 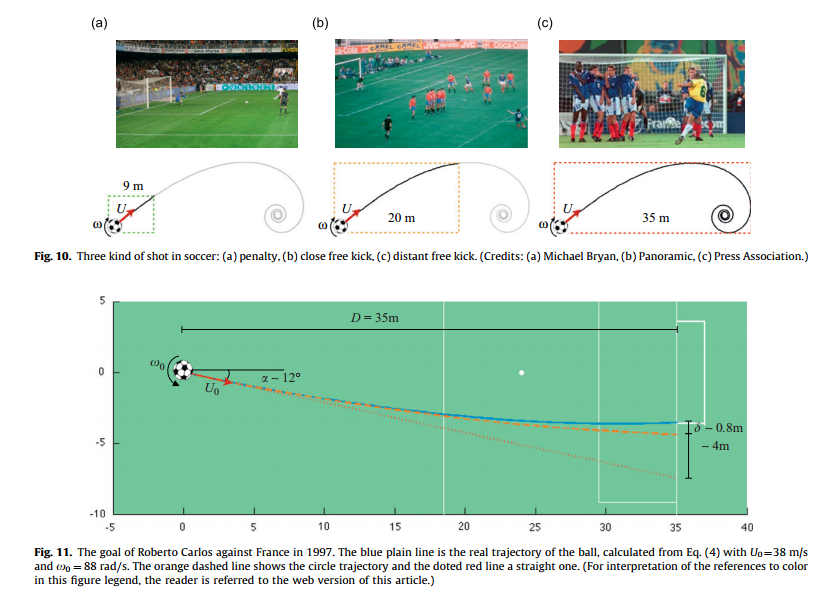 This is the way we interpret a famous goal by the Brazilian player Roberto Carlos against France in 1997. This free kick was shot from a distance of $35~\text{m}$. Roberto Carlos strongly hits the ball
($U_0 = 38~\text{m}/\text{s}$) with an angle of about $12^\circ$ relative to the direction of the goal; due to the rotation
($\omega_0 \approx 88~\text{rad}/\text{s}$, a value difﬁcult to extract from the movies, yet plausible), it sidestepped the wall, bent toward the goal, hit the goal post and entered (Fig. 11). The goalkeeper Fabien Barthez did not move: without rotation, the ball would have left the ﬁeld $4~\text{m}$ away from the goal! If the trajectory had been simple circle and not a spiral, the ball would have been still $1~\text{m}$ away[.]

From: Football curves - Journal of Fluids and Structures

Another article "Gaining insight about the unpredictable movement of knuckleballs by dropping beads into water" describes the so-called Knuckleball shot popularised by Ronaldo.

"When a sphere is in a flow, there is a critical velocity at which the wake behind the sphere and the drag force acting on the ball sharply decrease," explained hydrodynamics graduate student Caroline Cohen of France's Ecole Polytechnique. The decrease in the size of the wake can lead to a sideways force that increases the ball’s deviation from a straight-line path. Fluid physicists call this the "drag crisis."

Thrown relatively slowly and with minimum spin, compared with that of Major League fastballs, the knuckleball confuses batters by changing direction in an apparently random fashion late in flight.

But knuckleballs aren't restricted to baseball. In cricket, Indian fast bowler Zaheer Khan has been known to use a knuckler for his slower ball. Volleyball players experience knuckling as a spiked ball closes on them. And, most important to the French scientists, top players such as Spanish league Real Madrid star Cristiano Ronaldo can kick a soccer ball in such a way that it zigzags unpredictably en route to an opposing goalkeeper.

This is in addition to gravity, which will naturally give you a parabolic path curving downwards, but I assume you meant that funny left-right deflection.

EDIT: I may as well take the opportunity to point out the connection to lift and circulation as well: both Lift and the Magnus force can be understood as being due to the air flowing faster on one side of the object than another, the flow having a relative circulation around the object. In the case of the curveball, this circulation is due to the air being accelerated by aerodynamic drag at the surface of the ball.

The answer is the well-known Magnus effect which says that when a ball spins in a fluid it feels a force. A soccer ball's spin is most noticeable when it's spinning left-right (giving it the strong curve in either direction). This is the dominant kind of spin since soccer balls are kicked from the ground, making top-(or back-)spin difficult to achieve.

This is the reason curveballs exist in baseball. In this case they're thrown, so it's easier to give them topspin or backspin.

Rotating soccer ball will change air flow direction in one of ball sides, which according to Bernoulli's principle, will induce pressure differences between ball sides, and that will be Magnus Lift force, which for a sphere roughly is : $$ F = 4 \pi \,r^3 \rho\, v\, \omega $$

I will quote a paragraph from this article http://www.soccerballworld.com/Physics.htm which also explains the phenomenon:

Consider a ball that is spinning about an axis perpendicular to the flow of air across it. The air travels faster relative to the center of the ball where the periphery of the ball is moving in the same direction as the airflow. This reduces the pressure, according to Bernouilli's principle. The opposite effect happens on the other side of the ball, where the air travels slower relative to the center of the ball. There is therefore an imbalance in the forces and the ball deflects - or, as Sir J J Thomson put it in 1910, "the ball follows its nose". This lateral deflection of a ball in flight is generally known as the "Magnus effect".

The forces on a spinning ball that is flying through the air are generally divided into two types: a lift force and a drag force. The lift force is the upwards or sidewards force that is responsible for the Magnus effect. The drag force acts in the opposite direction to the path of the ball.

Let us calculate the forces at work in a well taken free kick. Assuming that the velocity of the ball is 25-30 ms-1 (about 70 mph) and that the spin is about 8-10 revolutions per second, then the lift force turns out to be about 3.5 N. The regulations state that a professional football must have a mass of 410-450 g, which means that it accelerates by about 8 ms-2. And since the ball would be in flight for 1 s over its 30 m trajectory, the lift force could make the ball deviate by as much as 4 m from its normal straight-line course. Enough to trouble any goalkeeper!

It's a very interesting article which explains this effect in detail it's very long though, so I didn't find the use to copy all of it here.

You will also find images there, defining the aerodynamics behind the effect.

This effect also is mentioned in this blog http://scienceblogs.com/dotphysics/2010/09/07/the-curving-soccer-ball

Not the answer you're looking for? Browse other questions tagged newtonian-mechanics angular-momentum everyday-life projectile drag or ask your own question.

1
What forces are involved in bending a freekick like that?
0
Why do ball makes curvature?
7
Bernoulli's principle on a curve ball
6
Distance a curveball travels?
2
Why do golf balls travel faster if they spin?
0
Acting forces on a curve ball (billiards)

7
"Artificial gravity" on a rotating space stations
8
Why water in the sink follow a curved path?
1
Kicking a soccer ball
12
Which travels further, a football or a soccer ball, when thrown?
4
Does a spinning mass follow a straight trajectory in empty space? Or is it curved like a golf ball?
0
What would happen if a ball flew through the open window of a car?
0
What equation describes the path of a ball tossed in the air?
4
What allows a ball (squash ball) to roll and not bounce out of a corner?
0
Determine path of golf ball