Hamiltonian of a bouncing ball

Consider a ball free falling from a certain height onto a flat surface. Assuming there is no energy losses, the ball would keep on bouncing and exert a periodic motion.

The problem is to find the period of motion using action-angle variables.

I am struggling to write out the Hamiltonian. I think $H=\frac{p^2}{2m}+mgy$ is not enough as it doesn't account for the periodic motion. Its phase diagram is not of closed curve or periodic function. What should the Hamiltonian be?

You're right that the Hamiltonian you've provided is incomplete, you need to include the fact that there's an impenetrable barrier underneath the ball (i.e., the "floor"). As a result, your potential energy can't be a smooth function, but would rather be something like:

In the case of such problems it's usually much more convenient to model the barrier as a constraint rather than as a potential. But nevertheless, the potential will be as shown below (left), and I'll leave it to you to show why the phase diagram looks like the image on the right (ask yourself what happens when the ball hits the floor, and it should be clear). 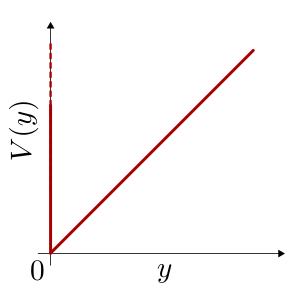 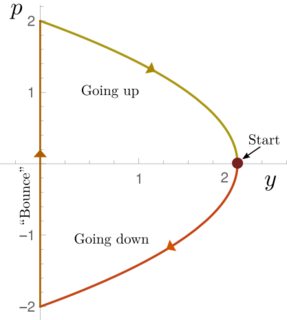 where I'll leave it to you to find the appropriate limits and integrand.

Not the answer you're looking for? Browse other questions tagged homework-and-exercises classical-mechanics hamiltonian-formalism collision or ask your own question.