What are Uncertainties in Quantum Mechanics intuitively? [duplicate]

So $\Delta x$ and $\Delta p$ are uncertainties in quantum mechanics. What exactly does the term "uncertainties" mean?

It means that if you were to try to take a measurement the "uncertainty" would characterize how large the standard deviation would be (for that measurement).

This is often explained that if you tried to make a measurement of something position you have to "hit it" with something and distort its momentum. This isn't exactly a correct interpetation as it's really the wave-particle duality (particles are waves of probability) that is what is causing this.

If you look at any macroscopic object such as books, houses etc. (pretty much everything your eyes can see), they have an exact position and momentum. They same is not true for electrons, photons and even atoms and molecules (for more information, see Why doesn't the nucleus have “nucleus-probability cloud”?).

Let's take an electron as an example and assume it is bound to an atomic nucleus. In the quantum mechanic model of the atom, electrons are represented by probability clouds (atomic orbitals) instead of small particles with one specific position: 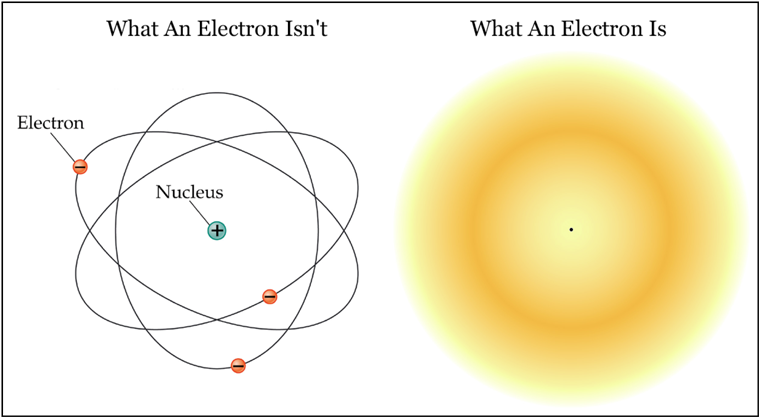 These probability clouds are mathematically described by a wavefunction and represent the probability of "finding" the electron in the shown position when measuring the same (which "forces" the electron to take one specific position).

10
Uncertainty Principle Intuition
36
Why doesn't the nucleus have “nucleus-probability cloud”?

4
Conformal Quantum Mechanics
3
What are hidden variables exactly?
0
Quantum mechanics, uncertainty and measurement
0
How are the laws of physics reversible?
0
Plotting quadrature uncertainties in phase space
0
What happens when uncertainty in position approaches 0 in Heisenberg’s equation?
1
What are 'Quantum Coherences'?