How is Alternating Current (AC) used in Bipolar Junction Transistor (BJT) without ruining its operation?

In a BJT (Bipolar Junction Transistor), say NPN in common base configuration, we forward bias the Base-Emitter Junction and reverse bias the Base-Collector Junction when using a constant DC supply.

Intuitively, when I replace DC with AC, the polarity changes after every half cycle. And this means, the Base-Emitter Junction is now reverse biased and Base-Collector is forward biased. This leads the BJT to be in Reverse-Active Mode.

But, we also know, the manufacturing of transistor is made uniquely, Emitter with medium area and highly doped and Collector being of largest in area and averagely doped. And changing the direction of current should might obstruct its function.

So, is there some transistors that can go in reverse-active mode and some breakdown, or it is a general property? And if later is the answer, how does it work?

The key is that you don't replace the DC bias with an AC signal, but you add the AC signal to the DC bias. The BJT amplifier circuits that you're studying perform this sum between the two components, and the BJT will work in the forward-active region as long as the AC signal is sufficiently small.

To better understand this point, let's have a look at the common emitter amplifier with self-bias circuit shown below: 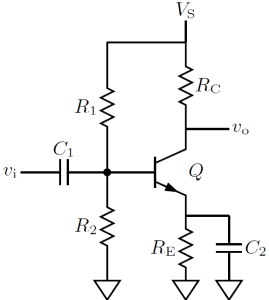 Not the answer you're looking for? Browse other questions tagged electric-circuits electric-current semiconductor-physics electronics electrical-engineering or ask your own question.

4
How does current flow from the emitter, through the base and to the collector in a NPN transistor?
7
How did the Bardeen-Brattain point-contact transistor work?
0
Semiconductors ->Transistors npn and pnp
1
Conceptual question regarding transistor biasing
5
How does a transistor work?