The following paradox is mentioned in the Feynman Lectures on Physics Vol II, Chapter 17, Section 17-4. I have seen various solutions to this paradox across the internet and even on this Stack Exchange. However my reasoning to solve the paradox is quite different from what I have seen. Therefore I wanted to know whether my approach was correct.

Consider a plastic disc which has equally charged metal spheres fixed in position at its rim. A current carrying coil is placed around the center of the disc as shown. 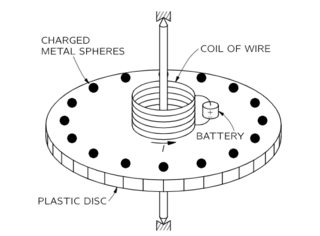 Now if the current is suddenly switched off, the magnetic field produced by the coil will drop to zero and thus there will be a change in magnetic flux through the plastic disc. This will cause circular electric field lines to form at the rim of the disc which will exert a net torque on those charges causing the disc to rotate.

According to Feynman the solution to this paradox does not depend on factors like the asymmetric placement of the battery or something else.

My attempt at the solution

The paradox arises due to the incorrect use of the conservation of angular momentum which only holds when there is no net torque on the system. Otherwise,

where $\tau$ is the torque and $L$ is the angular momentum.

Here we clearly see that a change in magnetic flux produces an electric field that exerts a net torque on the charged metal spheres. Thus the disc turns as its angular momentum must change as per the above equation. Hence the paradox is solved.

However most of the answers I have seen, some of which are mentioned here seem to use the idea that the initial magnetic field by the coil had some inherent angular momentum which was converted to the angular momentum of the disc's rotation.

Which approach is the correct solution to this paradox? If I have made a mistake, can someone please explain what it is?

39
What is the answer to Feynman's Disc Paradox?
0
The Ehrenfest paradox and materials science

39
What is the answer to Feynman's Disc Paradox?
2
Can a local magnetic field when changed introduce an electric field till infinity?
3
Paradox: electric current in a coil on a disc - will this disc spin if the circuit is opened?
1
Why is the graph for induced emf againt angle a sine graph for an ac generator?
7
Feynman's disk paradox used as a gyroscope?
1
How can a magnetic field exert a torque that causes a disc to rotate?
1
Emf induced in a rotating disc
2
Induced current due to induced current