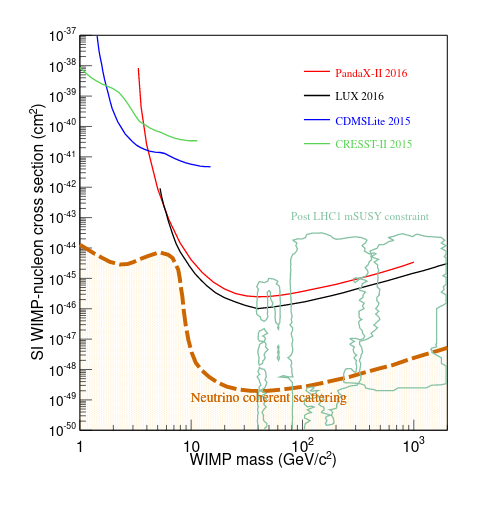 The cross sections on this graph span 13 orders of magnitude, which is a vast range. My question is why the observed mean density of dark matter in our universe doesn't allow this to be constrained to within about a factor of 10. The graph assumes that dark matter consists of WIMPs. Dark matter has to be produced in the early universe when the temperature was comparable to the mass, and I would imagine that this production mechanism would be one in which quarks or leptons interacted via the weak force to produce WIMPs. I would think that, given the mass, the cross-section $\sigma_p$ for this production process would be fairly tightly constrained by the need to produce the amount of dark matter that we actually seem to have. So based on my naive/fuzzy understanding of field theory, there should also be an inverse process in which a WIMP is absorbed by baryonic matter, and this absorption process should have a cross-section $\sigma_a$ which is closely related to $\sigma_p$.

Why, then, don't we have a narrow diagonal strip running across this diagram that is consistent with cosmological observations?

Because the details depend on the exact nature of the dark matter, which is unknown. For more complex models, there are additional free parameters that can vary and smear out an otherwise narrow prediction.

To elaborate: The WIMP is a special case of a "thermal relic particle". Thermal relic particles have been in thermal equilibrium at some time in the early universe, i.e. they constantly got produced and annihilated again in interactions with the thermal bath. (Protons and neutrons are also thermal relics). At some point the universe cooled and these particles dropped out of thermal equilibrium. At that point, their abundance is said to be "frozen out". The exact time of this freeze-out is set by the (thermally averaged) annihilation cross-section. Thus, from astrophysics, once you know the abundance of your dark matter particle (e.g. if you say it makes up 100% of the dark matter), and you know its mass, the annihilation cross-section is known exactly. See e.g. Figure 5 of this paper, the ball park being $<\sigma v> \sim 10^{-26}$cm$^2$ cm/s.

Your plot however does not show this annihilation cross-section, but the scattering cross-section. They are different things, but related by what is called crossing symmetry:

Shown is crossing symmetry in the context of thermal relic particles $\chi$ and their interaction with the Standard Model (SM, and also with some specific examples relevant to experiment) In Feynman diagram language that's just to say that you can rotate any Feynman diagram any way you like and still arrive at a valid diagram. Scientists try to exploit this: For any thermal relic particle, by assumption, the red ("make it") and blue ("break it") diagrams exist. They are being searched for by collider experiments (red) and so-called indirect searches for dark matter (blue). What your question refers to is the third leg, the so-called direct detection of dark matter, with the approach ("shake it") shown in green.

If you have a very specific model, then the cross-section for this third diagram can be calculated for a given annihilation (blue) cross-section. See e.g. Figure 3 from this paper for a specific example: 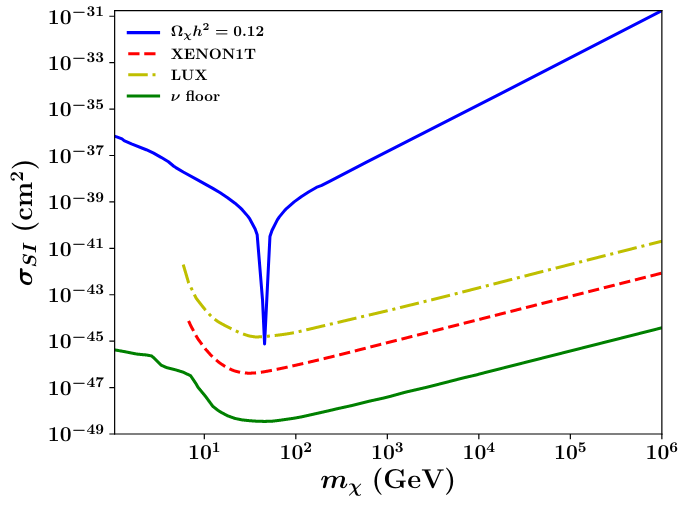 This is what you were wondering: Indeed, for a very simple model, you can get predictions that are very well-defined, such as the blue line in that plot. The limits and the neutrino signal also appear in your plot.

However, nature rarely is that simple, and this model has been written down specifically as an example of a minimal extension. The "singlet scalar model" is another example with similar results. Typically though scientists work on more comprehensive models, in which case there are more parameters that can be tuned. This in turn results in much broader blobs in the expected parameter space. The "mSUSY constraint" shown in your plot in green is one such example.

Not the answer you're looking for? Browse other questions tagged cosmology dark-matter or ask your own question.

2
What exactly are super WIMPs?
10
How convincing is the evidence for dark matter annihilation at 130 GeV in the galactic center from the Fermi Satellite data?
0
Why should we expect dark matter with weak scale masses?
4
Dark Matter Scattering
5
Could a 4th generation neutrino be a viable candidate for dark matter?
3
Different cold dark matter density parameters from early- and late-Universe observations
3
What formula is used to make exclusion plot in the direct detection of dark matter?
0
What are the exclusion limits on WIMPs?