PN junction: not sure to understand why reverse-biais lead to negligible current

My question is very highly related to Why doesn't current flow in reverse biased diode?

Basically, I would like to understand in more depth John Rennie answer. At $t=0$, I consider a PN junction not plugged to any generator. Then, I will have a depletion region and something like: 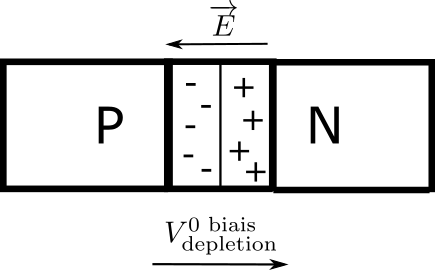 The diffusion of the holes from P to N (and of the electron from N to P) is being compensated by electrostatic force created on the depletion region. Nothing is moving.

Then, at $t=0$, I plug in a voltage generator in reverse biais. 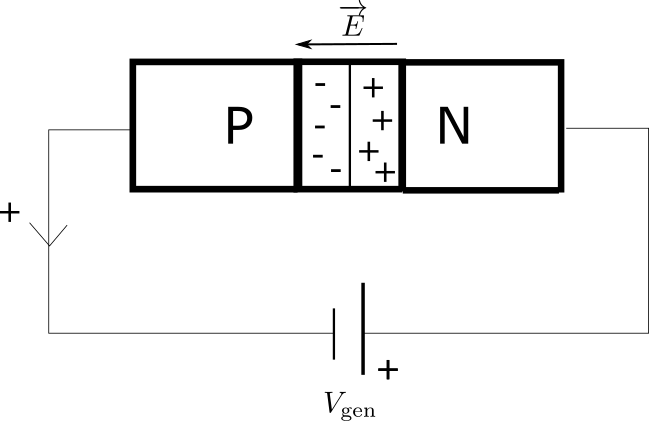 I focus on holes (but analog reasoning holds for electrons). They cannot move from left to right in the depletion region because of the electrostatic field. I could imagine them moving from right to left. They are negligible in the N region so we could believe that such motion is impossible. But they can go from P to the wire, arrive to N and then cross the depletion region.

On the other post it is explained that this gives rise to a transient current that will stop after some time. This is precisely what I would like to understand.

At $t=0^+$, a current can be initiated from the phenomenon I described. Now, in principle $V_{gen}$ can be different from the potential of the depletion region at zero biais.

Then, after this transient regime, things go to equilibrium and I have:

Do you agree until now ?

What am I missing here ?

I think you understand almost everything, but it seems the crucial thing you’re missing is this:

Let me explain how this happens, and why the resistor case is different. First, to make sure my makeshift terminology is clear, let's look at the picture:

Now, to avoid a 0/0 indeterminacy, and to be more realistic, we should remember that each wire has some low, but non-zero resistance. This will actually make the analysis more clear. Also, let's only look at the left wire. The analysis for the right wire will be the same.

When you connect a battery to the diode, or to a resistor, what happens? We can think of the battery as some black box mechanism to enforce a constant potential difference $\Delta V$ between its negative and positive terminals, no matter what happens. This will set up a gradient of potential throughout the whole circuit, which will push the current to start flowing counterclockwise.

Let's focus again specifically on the left wire. As part of that overall gradient of potential, the battery created a potential difference between the two ends of the left wire, and the current is flowing from its top to its bottom end.

In the case of a resistor, as we know this will be the case forever, the current will never stop.

By contrast, in the case of the diode, as holes flow through the left wire, the left side of the junction is getting robbed of more and more holes, and will therefore develop a negative charge, which will gradually make it harder and harder for the holes to keep flowing. The same of course will happen in the wire on the right hand side, for electrons.

What's the crucial difference between the diode and the resistor? The holes have a very hard time crossing from the right side of the diode to the left side, to replenish the deficit! Why? If we look at the picture again, it would seem that the electric field in the depletion zone should help them cross from right to left, because it’s pointing to the left. So why wouldn't they want to cross?!

The answer is, if any hole makes it to the right side of the depletion zone, then yes, the electric field will propel it further to the left and it will happily cross. The problem is that the overwhelming majority of holes supplied by the right wire "die" way before they reach the depletion zone. And when I say die, I mean they will encounter an electron and annihilate.

The reason I say "(mostly)" several times in the above paragraphs is because there will be some very small number of holes that manage to make it from the right side of the diode to the left side, so some very small amount of current will exist. Even though the right side of the diode is teeming with electrons (majority carriers), thermal fluctuations occasionally produce an electron-hole pair (an electron gets excited from the valence band to the conduction band). If a hole produced this way makes it to the depletion zone without being annihilated (or is born in the depletion zone itself), then it will happily be swept away by the electric field and will make it to the left side of the diode to join its comrades. The tiny current produced this way is called the thermal current.

The electric field at the junction results from electrons migrating from the conduction band of the N-type to the valence band of the P-type, because they fill lower energy states in the process.

When electrons flow from the N type to the battery, in reverse polarization, the continuation of the process requires that those electrons go through the wire to the P-type. There, they recombined with holes. So there is a flow of holes from the junction to the left.

The electric field in the junction increases as a consequence until match the battery voltage. But you can say that the same happens with a battery and a resistor, and there is a flow of current.

The analogy can be made, but here the central region is so depleted of charge carries, that the resistor has very high resistance, working as an isolator for all practical considerations. The analogy with a capacitor, with a dielectric without charge carries is maybe more close to reality.

When the polarity is direct, charge carries are forced to the junction, and the natural process of electrons losing energy from N to P continues because the resulting electric field is overcome by the electric field of the battery.

Congratulations, you have got most of what you need to understand junction capacitance. Yes, you add a reverse bias voltage, and charge will move from the p-region (and n-region) through the supply. What you missed are two key pieces:

The voltage drop on these 2 junctions will compensate V_depletion and the wire will be no need potential across it.

Share
Improve this answer
edited 2 days ago
answered Jan 10 at 20:30

Not the answer you're looking for? Browse other questions tagged electrostatics electricity semiconductor-physics or ask your own question.

4
How does current flow from the emitter, through the base and to the collector in a NPN transistor?
0
What are the current carriers in a PN junction?
0
Why can't a reverse biased diode conduct by majority carrier injection (UPDATED)?
1
Why diffusion current increases under forward bias in pn junction?
1
Why does diode built-in voltage persist when current begins flowing?
0
How valence electrons cross the field barrier in P-N junction?