Why does the conduction band conduct in the SSH model?

I am reading "A short course on topological insulators" https://arxiv.org/abs/1509.02295. There is a basic point that I don't understand about conduction and the band structure. Unfortunately, my knowledge of solid state physics is minimal.

The energy spectrum for the SSH model consists of two bands. For various staggered hopping amplitudes the following band structures are depicted.

Why are the positive energy states associated with a "conduction band"? Don't states in the negative energy "valence band" still have nonzero wavenumber and thus momentum? Is there some operator I can associate with the transport of charges that has nonzero expectation value only on the upper band?

Any insight or additional references regarding this would be useful.

I will just talk about conduction and valence bands in general here, since it really seems that is what your question aims at (though I may be mistaken!). Let's just talk in one dimensional terms. In a metal, the conduction band is only partially full. With no electric field applied, there are just as many electrons moving in the positive x direction as in the negative x direction. There is no net conduction of electrons in either direction.

Being only partially filled, though, this means that empty states are available to be occupied with just a small increase in energy.

In the valence band, there are no empty states available for the electrons that are only a small amount of energy away. There is only a large energy gap between the valence and conduction band.

It is as if you were sliding electron states along the valence band and as you begin to make an empty state at one end of the Brillouin zone, an electron from the opposite end jumps into it. All the state remained filled all the time. No net conduction in the direction of the electric field.

But this operator is not used since $\psi$ here is the full many electron wave function for the conduction band. Most transport in solid state physics is studied in a semi-classical way using the Boltzmann equation. I have seen the expectation value of a slightly modified form of the above operator used to derive the London equation in superconductivity. The modified form includes the vector potential $\vec A$.

Conversely, conduction bands are normally semi-filled. In the absence of electric fields electrons in the conduction band can again distribute symmetrically with respect to $k=0$, which would correspond to no current. Things change if we apply some electric field. Applying some electric field is equivalent to performing a translation of the electrons in $k$ space by some quantity $\delta k$. Since the band is semi-filled, the translation will result in an asymmetry between the electrons with $k>0$ and $k<0$, the result is a net current. Note that in the case of the valence band the application of an electric field is irrelevant, since it's filled: electrons exiting the BZ through the right will enter again through the left so everything stays the same. 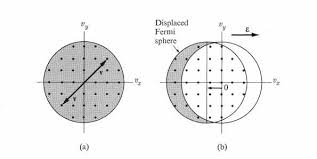 Not the answer you're looking for? Browse other questions tagged solid-state-physics conductors electronic-band-theory topological-insulators or ask your own question.

5
Band Gap/Energy Bands in Semiconductors?
8
Understanding electronic band structure diagrams
17
What is it about the “conduction band” of a material that is distinct from the valence band?
3
What does the concept of “free electron” mean in the context of band theory?
2
Understanding the Su-Schrieffer-Heeger (SSH) model and Topological insulators regarding invariants
0
Where are the allowed states in the conduction band for a single atom?
0
Conductors and Insulators from the point of view of Quantum Mechanics
0
Why are non-metallic elements with partially filled valence bands not conductors?
2
How do I see if the material is a Topological Insulator from the band structure?