Is the angular acceleration of a rotating body calculated about points out of axis of rotation different?

So I have probably got a major conceptual error here, But I was just confused by two problems while going through rotational dynamics.

So the first problem goes like this: A thin uniform rod of mass $m$ and length $l$ is attached to two strings at its ends. Find the tension in one string when the other is cut. 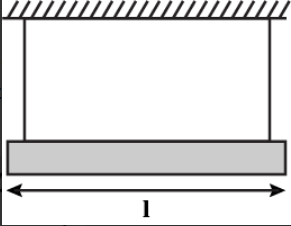 So the way we approach this problem goes like this:

I approached this problem in a similar way. Calculated torque about what I think is the axis of rotation (a line perpendicular to the plane passing through $A$) and then got the angular acceleration, then the acceleration of centre of mass and then the force equation. It goes like this:

$T = mg - m\frac{3g}{4\sqrt{2}}$
This is where everything falls apart. When I use this value in the force equation I get some answer which does not match with the key. The solution proceeds by taking the torque of Tension force about the centre of mass and then calculating $a_l$ of point $A$ from that equation, and then the acceleration of point $A$ in the vertical direction is taken to be zero, thus we can get a value for the angular acceleration, which then gives the value of Tension as $\frac{2mg}{5}$

Solution 1
Solution 2 (has a few typos)

But why does a similar approach of calculating torque about the axis of rotation not work here? I cannot understand why in one case it works and in the other it doesn't.
This was a little long, thanks to anyone who read this till the end and an extra thanks to all suggestions and answers.

Edit [05.01.2021]: I made a setup and filmed the motion of point $A$. Can't make solid conclusions. Could be helpful, I guess. The experiment conditions aren't all perfect but if anyone can study the footage closely then that would be helpful too. And from what I think, as the string is in full extension after it is cut, the length is same but now it makes an angle with the original position, which means point $A$ must have moved up. That could be a fair contradiction to the solutions.
Link to video

This problem is not nearly as simple as it is presented. I'm pretty sure the solution you've linked to is either wrong or hiding some major assumptions. The key seems to be "But the net acc. of A in the vertical direction should be zero," but no justification for that claim is given, and I don't think it's even right.

The question is the relationship between the angular acceleration $\alpha$ and the linear acceleration of the center of mass $\vec{a}$. In many simple cases in homework problems you can use $|a|=r\alpha$ and the direction of the acceleration is obvious. This usually happens when you have a solid object that is rotating around some fixed point of rotation. But that's not the case here! The pivot point is free to swing with the string so $|\vec{a}_CM| = r\alpha$" is not necessarily true.

Start with what we do know. When in doubt, go to Newton's Laws.

First, use $m a_{CM} = \vec{F}_{net}$ and that see the object must accelerate vertically. If $T$ is vertical then the net force is vertical and therefore acceleration of the center of mass must be vertical or zero.

But beyond this, I'm pretty sure the problem doesn't have a unique answer without some additional assumption. And the assumption the solution makes is probably wrong. Imagine holding the string in your hand and winding it up a bit so there's extra tension in it (you'll have to hold one end down while doing this so it stays horizontal). Then when you let the object go you should see it snap up with more acceleration than it would have otherwise even though it started in the same position. The point is that there are many valid answers for the tension in the string. This is true both for your simpler problem and the square one.

In the second case, immediately after the second string is cut, the first sting is still vertical and there is no horizontal force acting on the object. The acceleration of the center of mass is vertical and would be the same as the point mid-way between, A, and, B; rather than tangential.

1
Question regarding mass hanging from center edge of rotating disc
1
When applying the equation of torque and equating it to $I\alpha$ which moment of inertia do we take?
1
Rigid body rotation and translation about an arbitrary axis
7
How do we formally define the "angular velocity vector" of a point about an axis?
6
Angular momentum of a purely rotating body about any axis