I know that conservation of momentum is caused by invariance (symmetry) of the laws of mechanics to translation - this is an example of Noether's theorem.

However, I'm looking for an explanation, using only the terminology of Newtonian mechanics (force, position and its derivatives, etc.) and not Lagrangian or Hamiltonian mechanics, why this specific example of Noether's theorem hold - without understanding the theorem as a whole.

Think of trying to explain why momentum has to be conserved to someone learning Newtonian mechanics for the first time. A bit of calculus would be fine, but terms like Lagrangian, Noether's theorem, are not.

The Wikipedia article https://en.wikipedia.org/wiki/Momentum#Conservation gives a different justification for conservation of momentum - Newton's third law. But this appears to be a different justification of the conservation of momentum - it's not based on translation invariance. Or, maybe Newton's third law could be proved from translation invariance and both explanations are somehow equivalent?

However in Newtonian mechanics, under the assumptions that in an inertial system and for an isolated system of material points,

(a) forces are superpositions of pair of forces action and reaction of every pairs of points.

(b) the said forces are conservative,

we have the wanted conservation law when imposing that the total potential energy is translationally invariant.

Let us consider the case of two points of positions $x$ and $y$ respectively, the case of $N$ points can be treated similarly with the help of (a).

If $U(x,y)$ is the potential energy, changing variables to $u=x+y$, $v=x-y$, so that $U(x,y) =V(u,v)$, the condition (b) reads, $$V(u+z,v)=U(u,v)$$ for every $z$. Hence $V$ does not depend on $v$, that means that the potential energy depends only on the difference of positions. This fact immediately implies the third law (just by taking the gradients with respect to $x$ and $y$) and the conservation of total momentum.

Actually (a) it is not necessary as pointed out in the answer by ChiralAnomaly, see the comment.

The law conversation of conservation of momentum can indeed be derived from the combination of Newton's 2nd and 3rd law, and Newton's 3rd law is also fundamentally a consequence of symmetries. The explanation is as follows:

Newton's 2nd Law is $F=ma$, which means that a certain force on a mass m will make it accelerate by a certain amount. Therefore the final speed of an object depends on the time for which the force acts.

Newton's 3rd law is that every action force has an equal and opposite reaction force. This can be derived from the combination of spatio-temporal symmetries and Newton's second law. As stated earlier, a force by definition is something that causes acceleration. However acceleration can only exist based on its motion relative to the another object, which cannot be accelerating at the same rate, otherwise they would be stationery relative to each other. So acceleration stems from the difference between the rate of change of velocity between two objects. If one object accelerates in one direction relative to another object, it intrinsically implies that the second object is also accelerating with an equal magnitude in the opposite direction relative to the first object. And since a force is what creates this difference, this implies that force always has to act in both directions, equally. This statement can be source of confusion because if force acts in both directions, how can an object move? The answer is that the force is acting in two directions, but also on two different objects separately. So if a force is making one object accelerate in one direction from the point of view of a second object, it will also mean that the same force is also making the second object accelerate in the opposite direction from the point of view of the first object. So every force actually works in both directions, but we split them into two separate forces for two separate objects. And this is how Newton's third law can be derived.

Now lets come to the law of conservation of momentum. Momentum is defined as : $p = mv$

When we combine Newton's 2nd and 3rd law, we can can come to certain consequences. So lets consider that there is a collision between two objects, with mass m1 and m2 and velocities u1 and u2 respectively. A collision means that the two objects are exerting a certain force on each other. We know from Newton's second law that a force determines the acceleration, and the period of time for which the force acts determines the total change in velocity. So after the collision, the change in velocity of the first object, Δv1, can be denoted by $Ft/m1$. From Newton's 3rd law, we know that every force always has an equal and opposite reaction force, so F is the same for both objects, and from time symmetry we know that t is also the same for both objects. So the second object will have a change in velocity Δv2 of $-Ft/m2$. The negative sign is because the velocity is in the opposite direction. So then the change in momentum of the first object will be $$Δp1 = m1*Δv1 = (m1)*Ft/(m1) = Ft$$and the change in momentum of the second object will be $$Δp2 = m2*Δv2 = (m2)*-Ft/(m2) = -Ft$$.

Therefore the total change in momentum of the system will always be 0, and that is how the law of conservation of momentum can be derived 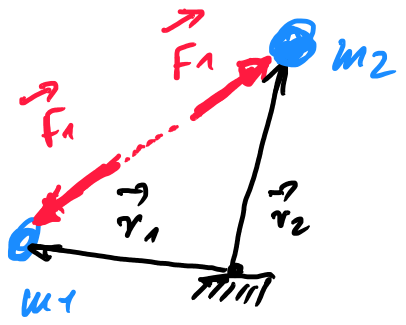 Look at this example the equations of motion Newton second law and third law.

if you add those equations you obtain.

the center of mass equation is:

thus the linear angular momentum at the center of mass is conserved.

Not the answer you're looking for? Browse other questions tagged newtonian-mechanics momentum conservation-laws symmetry or ask your own question.

8
Translation Invariance without Momentum Conservation?
3
Is there something more to Noether's theorem?
16
Why do people say that Hamilton's principle is all of classical mechanics? How to get Newton's third law?
21
What symmetries would cause conservation of acceleration?
3
Intuitive explanation for why time symmetry implies conservation of energy?