Does time dilation depend on approximation or distancing between observers?

The following scenario illustrates my understanding of time dilation:

I'm not sure if the above description is 100% correct, but it's how I understand it.

Also, most descriptions of the Twin Paradox say that they perceive each other's clocks running slower on the trip towards the star, but running faster in the trip back to Earth.

Wikipedia's definition seems to imply that any relative velocity causes time dilation, be it approaching or distancing.

Which is correct? I need no more than a simple, layman explanation.

Wikipedia's definition of time dilation is: "Time dilation is a difference in the elapsed time as measured by two clocks due to a relative velocity between them"

That's wrong. The usual special-relativistic time dilation setup requires at least three clocks, two of which must be at relative rest and synchronized by the Einstein convention.

The reason you're having trouble understanding this kind of time dilation is that it makes no physical sense. In the most extreme case, all of spacetime is assumed to be filled with these comoving, synchronized clocks, which pass through other objects like ghosts. Because the clocks are everywhere, there's no meaningful distinction between objects approaching each other and getting farther apart. In fact, introducing a localized "observer" makes no sense, since their position, and very existence, is irrelevant to the math. Sometimes they're even said to be "observing" the readings on the infinite network of clocks in real time, which is literally impossible since it would require a faster-than-light signal from the clocks to the observer.

The "Andromeda paradox", which was mentioned in another answer, is a good example of the extent to which this silliness has harmed people's ability to understand special relativity. The paradox is that if you built two networks of Einstein-synchronized clocks stretching all the way out to the Andromeda galaxy, and the clocks near Earth were in sync, then the clocks in Andromeda that were not comoving would be out of sync. It's not normally stated that way but that's the actual setup they're talking about. The resolution is that, yes, that would happen, but, I mean, you built two networks of clocks stretching to Andromeda; the fact that they're out of sync is not the weirdest thing here. In the real world there are no such clocks, neither naturally occurring nor man-made, so it's just irrelevant.

There is a version of special-relativistic time dilation that makes more sense, and that's if two (or more) clocks are compared at a common point, then move at different (and in general time-varying) speeds, and then are brought to a common point again and re-compared. The elapsed time on each clock is given by $\int_{t_i}^{t_f} dt/γ(t)$, where $t$ is the coordinate time of some inertial frame and $γ$ is the SR time dilation factor of the clock relative to the same frame. The answer is independent of what frame you pick, as long as you're consistent. The twin paradox is an example of a problem in this category – though most discussions make an utter mess of it by talking about "observers" with magical faster-than-light sensing abilities, and by not being consistent in their choice of inertial frame. The Wikipedia quote is still wrong if it's talking about this, since the velocity of the clocks relative to each other doesn't matter. What matters is their velocity relative to whatever inertial frame you picked (which is still made of a bunch of other clocks, but it's better since you can pick a lab frame whose clocks actually do exist).

Here you're describing a simple, physically sensible experiment: two localized objects emitting and detecting physical light pulses, with no secret clocks. Your analysis is correct. The ratio of emitted and detected pulse rates is given by the Doppler formula.

"Therefore, for you the clock of the light source will be moving faster": you cannot conclude that, even in classical mechanics if you approach a source that emits pulses you will see that the frequency of pulses is larger than for the emitter, but it does not imply that the clock will move faster, only that you are moving towards the pulses. It is called doppler effect. The reverse if you move away. Time dilation is independent of the direction of motion, it only depends on the relative speed between observers. What you say about the twin's paradox is also incorrect, the clock speeds up only when the travelling twin accelerates to return, otherwise, at constant relative speed, each twin will see the other's clock running slower.

Time dilation depends only on the magnitude of relative velocity, not direction. That is captured in the Loedel Diagram. It is a Minkowski diagram with each frame moving in opposite directions: 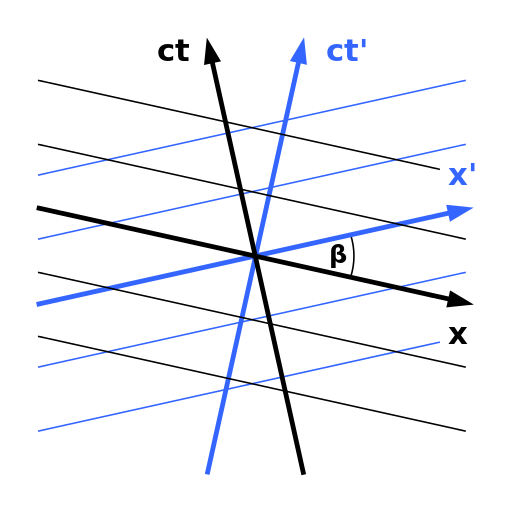 The power of this diagram is that it shows the paradoxical symmetry of time-dilation, and from a Newtonian mindset, it is paradoxical, but in relativity, as the observers change distance, the bias defining their "clock synchronization" changes in manner that allows each observer to consistently say the other's clock ticks at $1/\gamma$. We'll come back to it.

The linked Ted-Ed video on the twin paradox only explains what single local observers see while looking out their windows, and what they see is a doppler shifted signal:

(Note that the radical sign brings in a important symmetry that does appear in the sound-wave doppler shift...a symmetry that is broken by the existence of an aether, or stationary oscillating medium.)

The standard figure is shown: 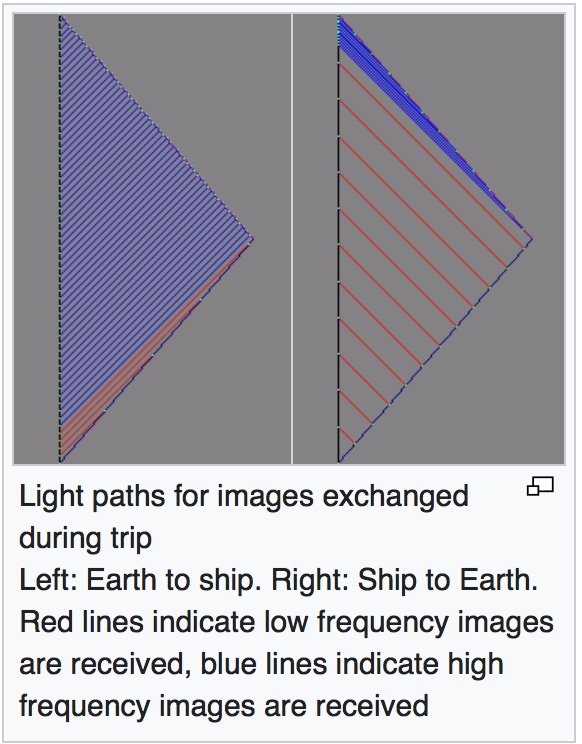 fewer than those seen by Space twin.

The does not really explain the Twin Paradox, because as you point out: each observer sees the other twin's clock moving slower on both inertial legs of the trip. To resolve this, we do not want to consider what the twins "see", meaning physically see looking out the window, as that is corrupted by Doppler shifts. Rather, we consider each twin to have access to a co-moving lattice of synchronized clocks (and rulers) with which they can record and reconstruct the space and time at any moment along their trip.

Defining $T=L/\beta$ to be the time it takes for 1 leg of the trip, then what is measured is:

Well, when space twin turned around, he needed a completely new lattice of co-moving observers, as his definition of "now" at Earth jumped forward by $ \Delta T$, as shown: 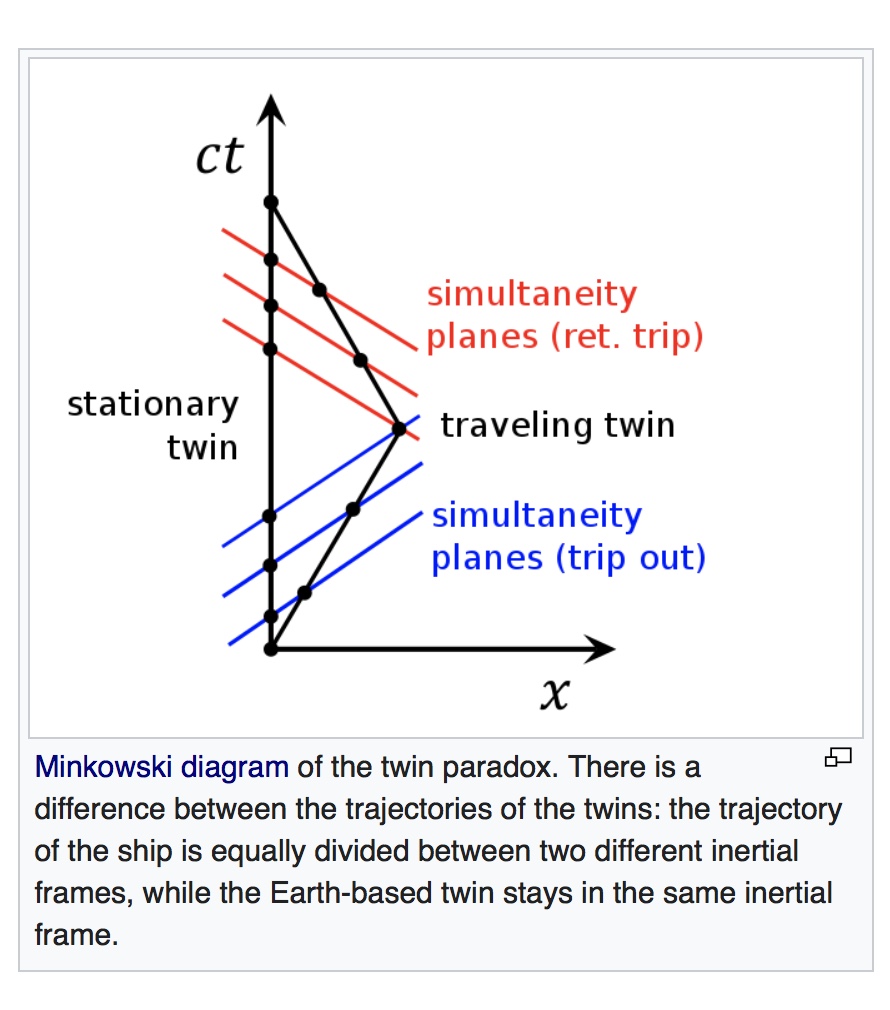 The line of simultaneity at turn around changes from the top blue line to the bottom red line. Note that space twin does not see Earth's clock running faster, rather, it is a recalibration of the bias required to synchronize the clocks. (It is reversible, if the twin turns around again, then he goes back to the blue lines and the time on Earth has now gone backwards, which is a perilous situation for time-dilation, but it completely acceptable for clock bias).

That peculiarity of relativity is known as the Andromeda Paradox, and leads to 4-dimensionalism, which is truly paradoxical.