Understanding the zero current in a simple circuit 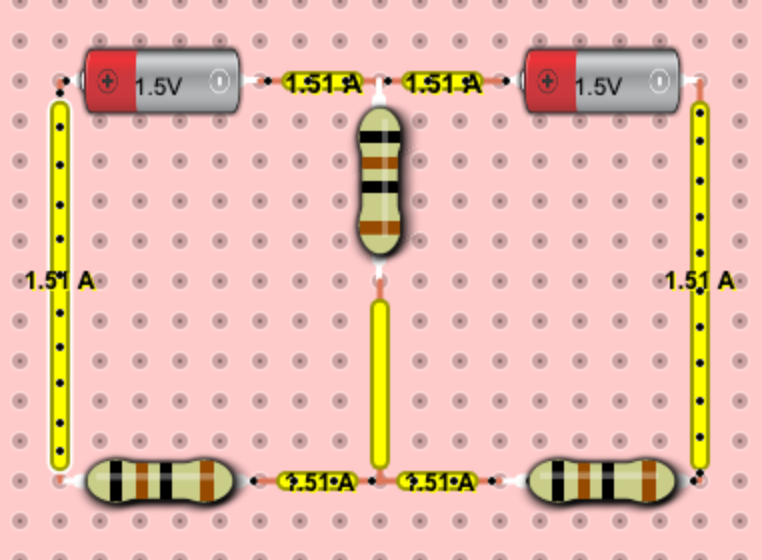 As you can see, it has two batteries of 1.5 V, and three identical resistors. The electric currents passing through each wire are also indicated. I'm puzzled by the fact that the current on the interior wire is zero (that's why there is no number indicated). I've already verified that this is true by applying Kirchhoff's laws. However, is there any intuitive explanation of why the current of the middle wire has to be zero, without need of doing any calculations?

Another intuition: both circuits are the same but in reverse from the point of view of the center wire, so each provides the same current but in opposite directions, thus cancelling each other.

It's Wolphram jonny's answer with pictures

Try reversing one of the batteries or changing its voltage. This can help develop intuition.

In the outer wires, both batteries try to push electrons in the same direction but on the inside they push on the opposite sides and because they are both $1.5V$, they will cancel each other's effort. If one of them was stronger you would have current in the middle.

You can connect a resistor (or a solid short for that matter) between any 2 equipotential points and it will have no effect on the circuit. Because both resistor terminals are at same potential no current flows.

Remove your middle resistor, analyze the circuit, and you will see it clearer.

p.s. Voltages are meaningless unless measured to some reference point. This can be any point in the circuit. It is typical to make this point the ground reference - in your case, putting it between the batteries would be a good spot.

Imagine voltage/potential at some point as density of electrons passing on a road. They all need space, so if there's a place near them with lower density, part of the electrons move there.

Now, let's say on the bottom end of the wire in question there is a potential, so the density of electrons is higher than usual. They see they can go up to the middle wire, and they do move there, but at some point they meet the electrons from the upper end of the wire, which has the same potential and same density of electrons. So, after they meet, they cannot go anymore, there's basically no direction they'd want to move to, because the density is now equal at all points, and therefore new electrons also no longer come from any end.

That way, we had a quick movement of eletrons which then established a balanced state, and no movement after that. But current is constant movement, so it doesn't count. Constant movement can only be created by constant difference in density and we don't have that.

So, you had a right feeling that some movement from the ends to the middle part should happen, it's just that it lasts very short.

Also, you can imagine some gas moving through the pipes, with the same result. Imagine that batteries emit gas from one end (high potential) and suck it from the other end (low potential). That way you can clearly see how density of the gas smoothly decreases from high potential to low, therefore creating equal current across all the outer wire.

Not the answer you're looking for? Browse other questions tagged electric-circuits electric-current symmetry electrical-resistance batteries or ask your own question.

2
Is a real voltaic cell always schematically equivalent to an ideal battery and a resistor?
0
Can any electrical circuit be solely solved by Kirchhoff's circuit laws?
0
LC-circuit and the current
0
How much current goes through an ideal wire?
0
How many currents are there in a circuit?
0
Current due to two parallel batteries in a circuit
0
Why are Kirchhoff's circuit laws and the nodal analysis equivalent?