What happens if a rotating object changes its center of mass?

Suppose I push an object, for example a rod with two weights attached to the ends. Then, the object will move forward, but will also rotate, if the push is not at the center of mass (COM).

How is the trajectory affected, if the object itself changes such that the COM changes midflight? For example, if one weight moves smoothly to the other side?

So, if I push at the COM at the start, I have no rotation. So, midflight, nothing changes and the object moves in a straight line without rotating.

But when I do not push at the COM at the start, the object has some rotation to it. And this rotation should change, right? But then, what are the exact equations for this motion? How does this change of rotation look like?

I assume there is no friction involved. Me and the object are far away in outer space.

Consider the following system, moving on a flat and frictionless surface.

We now engineer it so that at $t=0$ the CoM translates with velocity $v$ and the bar plus masses system rotates about the CoM with angular velocity $\omega$. 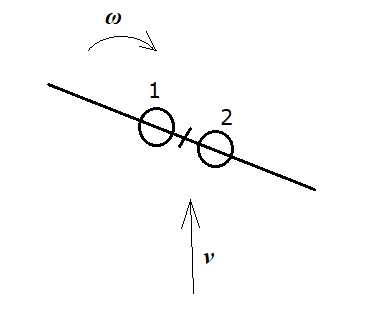 Firstly, due to Galilean invariance, the rotation and translation happen completely independently from each other. And with nothing impeding translation, $v$ remains constant for all time.

However, there's no centripetal force keeping $2$ in place, so it will move away from the initial CoM. The moment of inertia of the bar plus masses will also change. In fact it will increase.

There's no friction, so rotational kinetic energy $K_r$ is conserved. At time $t=t_1$ we would have:

Taking the time derivative of $(1)$ and bearing in mind the $\text{LHS}$ is a constant, then:

would be the Newtonian equation of motion for the rotational part of the motion.

As regards the notion that the CoM will move sideways, the answer to this question puts that to rest, IMO. After the system has been set in motion no external forces act on it anymore. This means that the CoG must remain in a uniform, linear motion for all of time.

First let's take the situation when the object is moving without rotation, and by some internal mechanism, one of the weights moves.

For an inertial observer, by conservation of momentum, the other weight (together with the rod that connects both weights) must also move, keeping the COM in the same previous straight line.

If the same happens for a rotating object, both weights also move to keep the COM in the same straight line.

About the rotating, in the most general case for a rigid body, we can only say that the angular momentum is constant, but the magnitude and direction of rotation may change.

The equation for a rigid body is: $\mathbf L = I\omega$

But if one of the balls is free to move back and forth along the rod, it is no more a rigid body. The EOM is still more complicated.

Not the answer you're looking for? Browse other questions tagged newtonian-mechanics rotational-dynamics reference-frames moment-of-inertia or ask your own question.

0
How do I calculate the speeds in x, y, and theta of a spinning rod?
1
How do I properly apply the parallel axis theorem to a rod-sphere system rotating about its center of mass?
4
Kinetic energy of an object rotating about an axis not through the center of mass
6
Rotation and center of mass -- A collection of common doubts
0
Do objects rotate around their center of mass or not?
2
Tension in a rotating object
0
Does a force does more work on an extended body?
2
About which axis we should take moment of inertia?
4
What exactly is center of mass?