Why does the wave description say that probability oscillates, while the phase interpretation says constant amplitude?

The wave description of a particle illustrates an oscillating probability of the particle being found in any point in space.

Why does the wave description say that probability oscillates and the phase interpretation says constant amplitude? What am I missing?

Let me see if I can put this in simple terms. I wrote a simulation of this once.

You start with a simple wave like $exp(i \omega_1 xt)$ that sits there oscillating on the real x line. That represents a particle whose energy you know, but whose position you don't, because the probability of it's being anywhere in x is everywhere equal. 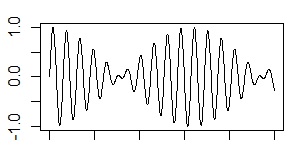 If you add in another wave at, say, $\omega_3$, you still get a beat pattern, but the peaks are further apart. Every additional wave you add causes the peaks to appear further apart. So that's how more uncertainty about energy causes less uncertainty about position (because there are more places where the probability is low). This is five waves added together, with slightly different $\omega$:

Take this to its extreme:

Add in an infinite number of waves, all of slightly differing $\omega$, and the peaks become infinitely far apart, so the one peak you see has all its probability in one place.

I assume you're referring to the wave equation of a free particle in quantum mechanics. The free Hamiltonian is just the kinetic energy $p^2/2m$ (for a massive particle). So, the eigenstates of the Hamiltonian are simply the momentum eigenstates, i.e. particles with constant momentum.

Mathematically, you can write the position-space wavefunction as $\psi(x) = e^{-i \omega x}$. As you point out, the phase here cancels in $|\psi|^2 = 1$. Considering the uncertainty principle, you can see that a particle with definite momentum must have completely indefinite position, i.e. the probability of finding at a given position is the same everywhere. And indeed, this wavefunction is not normalizable, since a momentum eigenstate is a singularity of the uncertainty principle: $\Delta x = \hbar/2 \Delta p$

34
Why can we treat quantum scattering problems as time-independent?
5
“Synchronization” Probability of Multiple Waves with Varying Frequencies
0
Why do people say the phase oscillates in time and the amplitude stays the same but the intensity of a traveling beam does oscillate with time?

0
Wave packets and the derivation of Schrodinger's equation
1
Why does a plane wave leave the position of the particle unspecified?
1
Position space wave function of an electron
9
In the oil droplet experiments that suggest de Broglie’s pilot wave theory might be accurate, what does the fluid surface correspond to?
1
Is the wave function the Radon-Nikodym derivative of a complex measure?
3
Does QFT re-interpret the meaning of the wave function of Schrodinger's equation?
0
Does measurement of momentum always collapse the wave function into a plane wave?
25
Can someone provide a physical — not mathematical — intuition for the phase in a quantum wavefunction?
1
Why is the field quantization applied to the free particle?