Apparent weight in the elevator

If an upward force was applied on an object which was at rest, the magnitude of the normal force decreases, 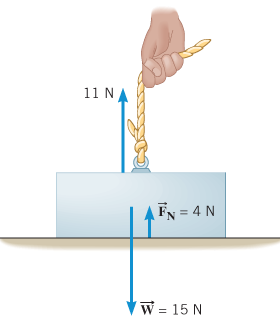 whereas, in an elevator which is undergoing an upward acceleration, the magnitude of the normal force increases rather than decreasing. 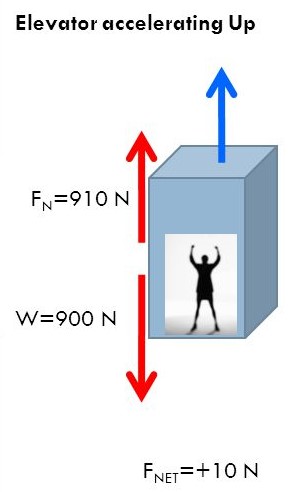 Why does the magnitude of the normal force increase rather than decrease in the elevator?

I like to visualise Normal force as a force whose magnitude depends on the intermolecular distances.

Knowing this, now you can apply this to the above two cases.

In this case, initially the block was at rest but the floor accelerated upward which in a very short span get closer to the bottom surface of the block and the block get pressed to the floor (due to inertia) and thus the Normal force from the floor on that block increased and hence it also accelerates up with the floor quickly.

I think what's confusing you is that, the way they are drawn, the two diagrams placed side by side are misleading. The object of interest in the first diagram is the block, but in the second it's the person (the forces are acting on the person) in an elevator that's already not in contact with the ground, but is still accelerating up.

In the first image the normal force comes from the ground (an external object) and acts on the block. In the second image, the normal force is exerted by the elevator floor (from the inside), and is acting on the person. (In other words, if we're just looking at the forces acting on the person, the elevator itself plays the role of the ground - but the "ground" is moving.)

If, however, your object of interest is the elevator itself (together with the person inside), then as the elevator cable pulls everything up, the elevator starts rising, and the normal force exerted by the ground on the elevator box decreases, and eventually becomes zero - which is analogous to what happens with the block.

Note also that when the whole system is considered, the net force has to be larger compared to the net force on just the person, because it supplies the same acceleration, but the total mass is greater: $F_{net} = (m_{person} + m_{elevator})a$

Drawing a FBD will help you understand.

Once $F_\mathrm{app}>mg$, then the normal force $N=0$ and the block will begin to accelerate.

The elevator case is a little different, because in this case, the normal force is the force that will accelerate the person.

From a FBD and coordinate system where upwards is positive, we know that $ma_y=N-mg$, and thus $N = mg+ma_y$.

In all cases the object is considered to be the system.

Object in a lift
The situation is subtly different in that now there are only two forces acting on the object as there is now no $F_{\rm pull}$ and $F_{\rm N}$ is the upward force which can produce an acceleration of the object.
If the lift is moving with constant velocity, either upward or downwards or is at rest, then $F_{\rm N} -mg = m\,0 \Rightarrow F_{\rm N} = mg$ which is just the situation when $F_{\rm N} + F_{\rm pull} -mg = 0$ in the first case.
Since there is no external force $F_{\rm pull}$ the motion of the object is controlled by the net force $F_{\rm N} -mg \,(\,=ma)$ and the smallest value of $F_{\rm N}$ which is possible is zero when $a=-g$ ie the lift is in "free fall" which could mean that the lift is actually moving upwards and slowing down.
It is the acceleration of the lift which is important not the direction of travel of the lift.

As the acceleration of the lift increases from $-g$, ie becoming less negative and eventually becoming positive, the normal force will increase from zero with its value being given by th equation of motion $F_{\rm N}-mg=m\,a$

So, if the elevator is moving up with an acceleration of 'a', then you have to take the force applied due to the motion in downward direction and equal to ma.

If you still don't understand it, then take it like this: if you are in an accelerating car, which is accelerating towards right, you would feel yourself being pushed in the left direction.

You are looking at different things, that's why you see differences. But their behaviour is actually similar:

You are comparing two different things:

Not the answer you're looking for? Browse other questions tagged newtonian-mechanics forces reference-frames free-body-diagram or ask your own question.