Whether or not multiple axial modes will lase depends, in part, on the cavity-mode spacing $\Delta \nu_a$ in comparison with the frequency spectrum (or gain bandwidth) $\Delta \nu_g$ of the gain medium. This is shown in Fig. 1.13, where the gain curve is superimposed over the longitudinal modes of an ion laser. The gain bandwidth is determined by a number of possible gain-medium mechanisms: natural broadening due to spontaneous decay of excited-state energies, Doppler broadening due to atomic or molecular motion, collision broadening due to intermolecular impacts of gas molecules that change the phase of the emitted wavefront (Fig. 1.7), or phonon broadening due to imperfections and variations in lattice spacings in semiconductor, solid-state and fiber lasers. Independent of mechanism, a gain bandwidth wider than the axial mode spacing – as shown in Fig. 1.13 – has the potential to lase at more than one axial-mode wavelength. 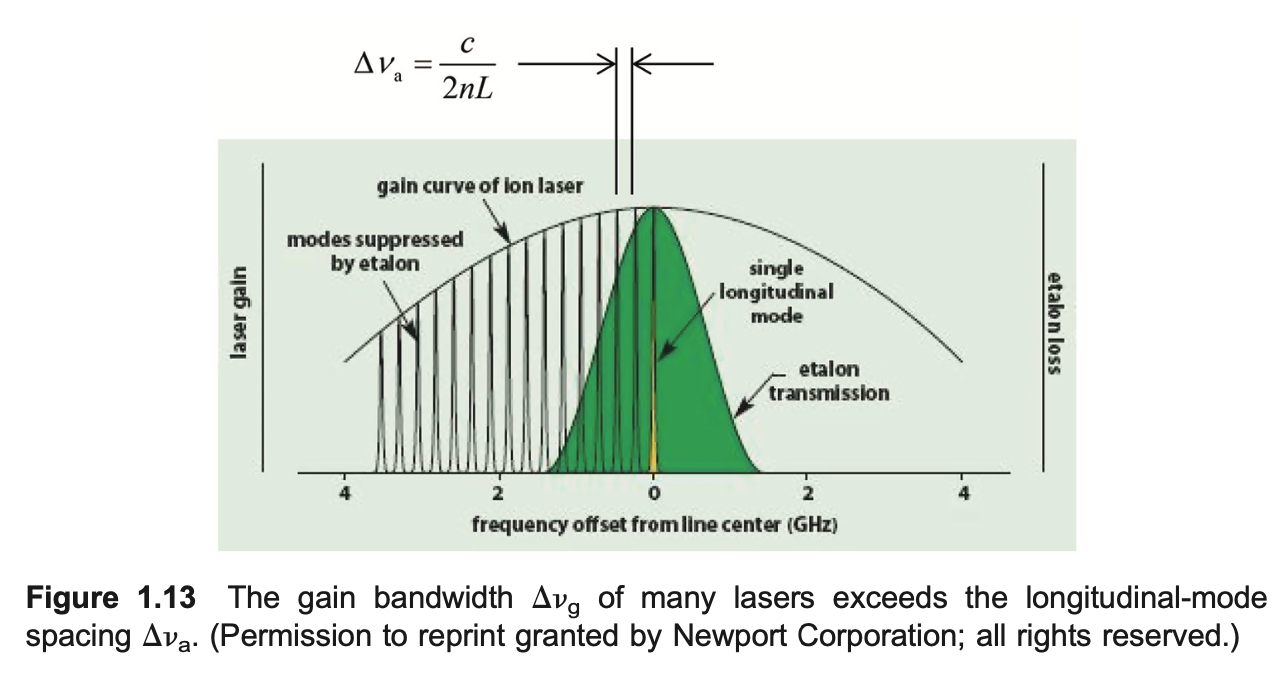 Whether or not this occurs depends on the third contributor to the emission wavelength and linewidth, namely, how the gain medium responds (saturates) to power levels inside the cavity. There are two possibilities: (1) the gain decreases equally across the entire gain bandwidth as excited-state population levels are used up to increase the output power (homogeneous saturation), or (2) the gain decreases only at specific wavelengths depending on the gain-broadening mechanism (inhomogeneous saturation).
For homogeneous gain saturation – as is found with natural, collision, and homogeneous phonon broadening – the peak of the gain at steady state will drop to equal the cavity losses, and this will occur at or near one axial mode. This mode will thus lase, and homogeneous saturation typically leads to single-longitudinal-mode (SLM) lasing at one axial mode (aka single-frequency), rather than over the entire gain curve.

So this means that, for homogeneous gain saturation, the mode pointed to as "single longitudinal mode" in figure 1.13 will be the only axial mode to lase? But, as can be seen in the figure, there exist other axial modes in the "etalon transmission" part of the gain curve, so why do they not lase as well?

Here's a nice graph I found during my research: 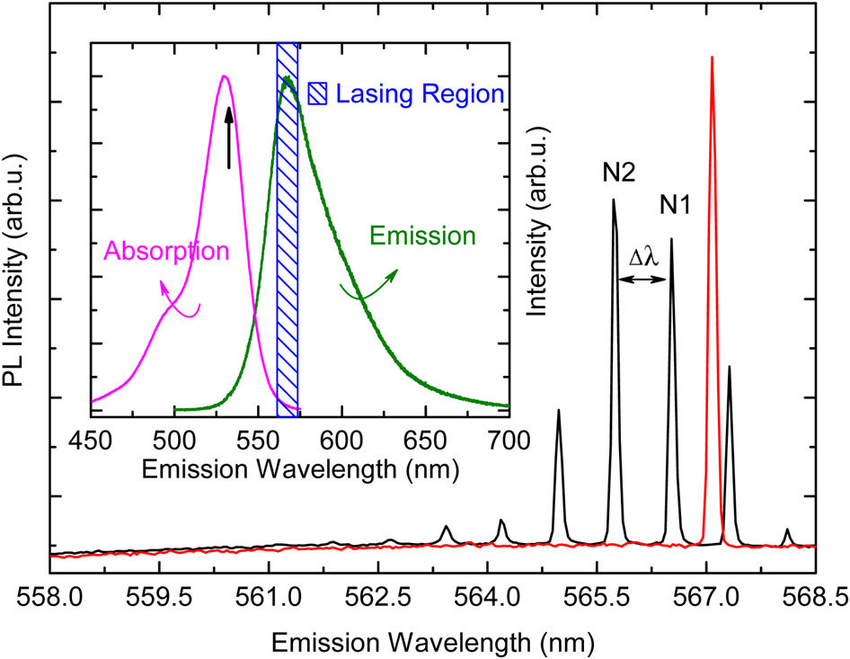 There are several approaches to a good answer to Your question. The most preferred one is in the laser community is to make use of practical empirics. Like in the article from wikipedia.org: Laser, there is a chapter dedicated to the popular types of laser in practical use.

For all other types or classes of laser, there are broadening process parasitic to single-mode lasing. So that there is a smaller optical gain profile needed to enhance one mode against others. The range of measures to achieve such gain profiles is very wide. This can be intra-cavity or extra-cavity. Some laser types need a pump source that is the most common extra cavity gain profile creating.

The greatest advance in lasers lately is the semiconductor lasers. The race to the blue laser produced a lot of enhancements and patents. Therefore not the best practices are taught or documented until dotating semiconductor layers are in scope.

This article introduces some formulae for the laser line: Laser linewidth. The most general description for laser output is the Voigt profile. This profile is just the start and the cited article has beginner level on how to describe properly with some respect to the personnel proficiency expectation laser emission. Your figure 1.13 starts already with the Voigt profile and leaves out all the necessary mathematics and numerics. It visualized somewhat the convolution. The spikes are Cauchy-Lorentz distributions and the green filled function is Gaussian. The wide curve is a Voigt profile. Newport does not bother their customers with this knowledge. But You asked for this.

The article for the Voigt profile is not specialized for lasers as the Newport citation is. This article is closer and offers some access to experimental theory Spectral line shape. The author names some important types

"The principal sources of broadening are:

Lifetime broadening. According to the uncertainty principle, the uncertainty in energy, ΔE and the lifetime, Δt, of the excited state are related by ΔEΔt⪆ℏ This determines the minimum possible line width. As the excited state decays exponentially in time this effect produces a line with Lorentzian shape in terms of frequency (or wavenumber). Doppler broadening. This is caused by the fact that the velocity of atoms or molecules relative to the observer follows a Maxwell distribution, so the effect is dependent on temperature. If this were the only effect the line shape would be Gaussian. Pressure broadening (Collision broadening). Collisions between atoms or molecules reduce the lifetime of the upper state, Δt, increasing the uncertainty ΔE. This effect depends on both the density (that is, pressure for gas) and the temperature, which affects the rate of collisions. The broadening effect is described by a Lorentzian profile in most cases. Proximity broadening. The presence of other molecules close to the molecule involved affects both the line width and line position. It is the dominant process for liquids and solids. An extreme example of this effect is the influence of hydrogen bonding on the spectra of protic liquids."

For example, no real Helium–neon laser emitted the theoretical line with the theoretical line width despite it is close. But the weather or the room climate influences the line and the line width very much. A real Helium–neon laser is a good climate measurement multi-instrument if it were used for that. Semiconductor lasers are of that kind to and protective seals are used where necessary for the application.

The step from the inset of Your second picture to the main curve is not only a closer resolution of the spectrum. It is the step from band to line. The black curve is the unselected emission line spectra. The red line is the selected and amplified resulting line of laser emission. From this picture 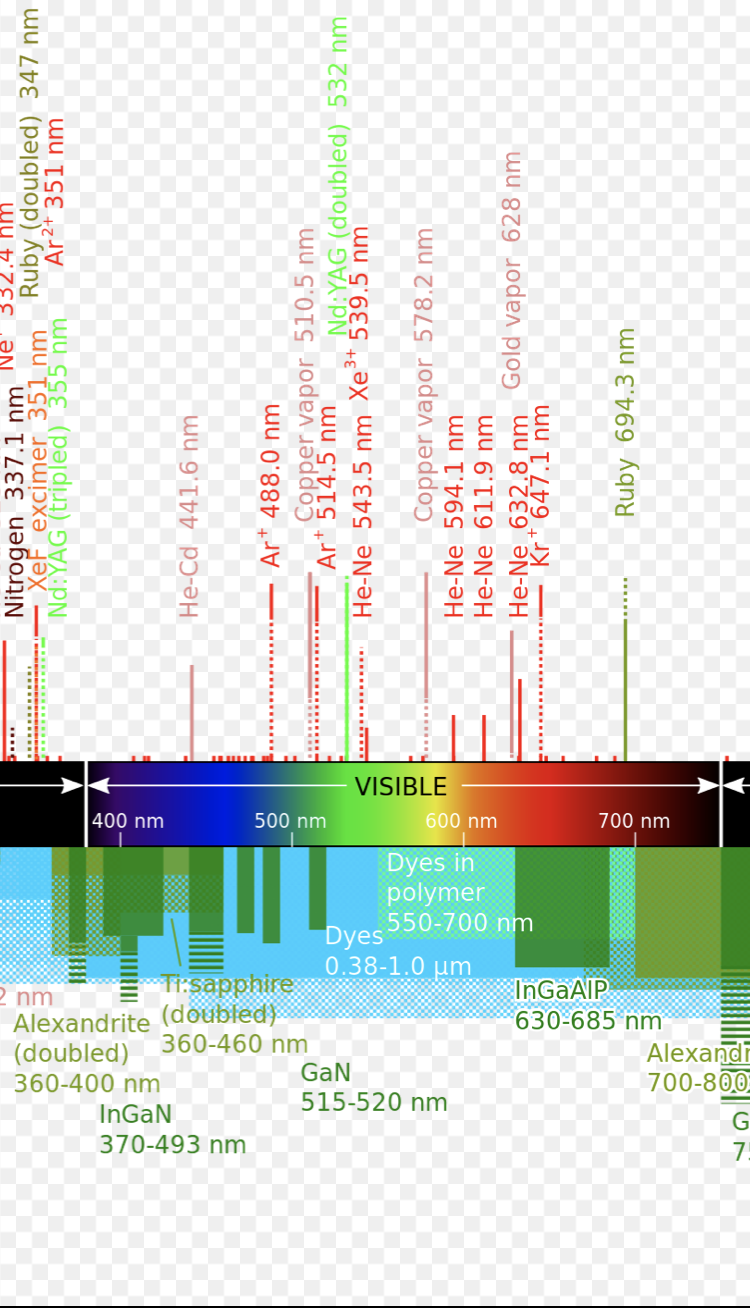 it looks like Dye. In the article Dye laser there is a picture corresponding to the inset. Dye laser need a pumping source. That can be a flash lamp, excimer laser or other UV laser sources or most modern semiconductor sources even dye-dye-pumping is used. So this too can be a pumping and emission spectrum pair. Often in dye lasers use of mode coupling is made.

For simplicity mode coupling dealt with as a source for broadening. In the professional literature, convolution methods are used and Voigt profiles are approximated. The experimental part is even harder than for other laser systems. There is no need for disappointment for beginners with lasers not going to deep into the details about this problems.

A good approach is to select for Yourself some laser classes and learn details about what is important for these lasers during lasing for mode selection and amplification and gain profiling. The area of science is very broad and deep. Many publications has been made. Like in the example of Theodor W. Hänsch it is regarded in the scientific community very high to write professionally about these topics. Most of them are still open and will gain Nobel prizes in the future. Caused be the complications on the experimental and mathematical and theoretical sides this is very complicated, very hard to drive further.

This search on Google Hybrid Hemispherical Microresonators offers some similar references to the one given. From that this is semiconductor laser methodology. Semiconductor laser suffers from the severe problem of astigmatism of their emission. This is indeed not corrected by a hemisphere. The main technic in semiconductor lasers is live with high losses and apertures. That is shown really impressive in the referenced article. The laser emission looks like consisting of many filaments like those seen in atmospheric flashes.

The setup is by this few added remarks not able to evolve transversal or longitudinal modes. The mode emitted depend on the ones from the pump laser system. This looks on the photographs like a sphere or blob. This is consequencial since the sphere is deposited onto a hygroscopic layer. Such layer should not be exposed to either vacuum or atmosphere due to deterioration because by these. Hemispherical in the solution means no real aperture. Just the ones from the propagated pump laser beams. Such apertures are called virtual.

As additional problems comes the hybridizity of the junction between the sphere and the dye dotated semiconductor into play. So the inner hemisphere might not controllably be such a surface and so will be the outer hemisphere be formed by the conditions of the rigid body forming after addition. The pictures have viewports letting the blob look round.

The filamentation in one of the above threshold picture of the emission ask for other influences on the beam profile than those met in the literature. This looks highly disturbed and like a flash discharge rather than nice beam profiled laser. There might be influence of contrast problems and problems of the photographics system because being hit be a laser beam frontal, but that does not account for all.

Not the answer you're looking for? Browse other questions tagged optics laser photonics laser-cavity or ask your own question.

0
Are some wavelengths 'longer' than others spatially, and as such explain things such as longitudinal modes?
2
What if the optical length of a cavity is not a half integer scalar of the standing wave wavelength?
1
Qualitative description of how an inhomogeneous broadening mechanism can lead to multimode oscillation in a laser cavity
1
A single spatial mode whose associated harmonic oscillator is in its $n$th excited state unambiguously contains $n$ photons?
1
Half-wavelengths of the electric field fit in the cavity length $L$: $m \frac{\lambda}{2n} = L$
0
If most types of practical lasers produce a large number of half-wavelengths, then how are they practical for use at all?
0
Why can no commercial laser products achieve a frequency stability of $< 1 \ \text{Hz}$?