Calculate/estimate power of a fission bomb

I have some questions about the released energy and power of a nuclear fission bomb.

What are the key dependencies of the power of a fission bomb?

The type of fissile material and geometry( the arrangement in space).

Is it true that the power of a fission bomb depends linearly on the mass of the bomb? If so, why?

The energy available comes from nuclear transitions and is fixed for a specific interaction and isotope combination. It is proportional to the number of nucleons available, and thus to the total mass.

Is there a simple physical argument to estimate the magnitude of the total released energy of the bomb if you know the mass and the used isotope? Can you provide an example calculation?

No. It can be estimated after the fact. That is why there are always trials of all new weapons.

How can I estimate the power (released energy per time) from this information? Is there a closed formula to calculate the power of a fission bomb. 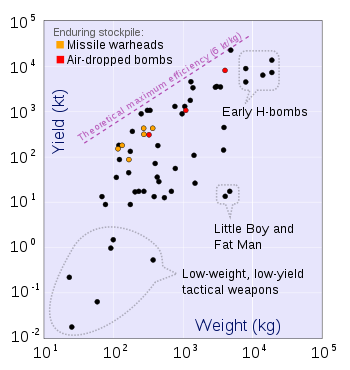 Logarithmic scatterplot comparing the yield (in kilotons) and weight (in kilograms) of various nuclear weapons developed by the United States.

The power will depend on the geometry i.e. the arrangement in space of the fissile material. The energy released can be estimated after the fact, as is shown in this wiki article, although there are theoretical maximum yields that can be estimated.

This question can really be satisfied by taking a nuclear engineering course, not by asking questions here, imo.

The energy release by the bomb is given by the total mass, ie., tamper plus fission material divided by 2 and multiplied by the velocity of expansion squared. This velocity is the expansion to second criticality divided by the characteristic expansion time.

Not the answer you're looking for? Browse other questions tagged energy nuclear-physics or ask your own question.