In many lecture notes, it points out

If my understanding is correct, the premires of both cases are Cooper pairs. The existence of Cooper pairs is based on attractive interaction between Fermion particles. Thus BEC pair also require negative scattering length.

Some pictures in these lecture notes show,

which hints my understanding about BCS pairing and BEC pairing above is not correct. Yet I still cannot imagine how repulsive interaction can result in a molecule.

For a Fermi system, now, the Pauli exclusion principle immediately forbids any eigenvalue to exceed unity so a BEC in the literal sense cannot occur.

Though you may wonder: what if we construct the density matrix out of two-particle states (instead of single-particle ones)? Two-particle states could be a diatomic molecule or a Cooper pair (both of which would be unstable, by the way, unless there is a non-zero interaction strength). In that case you could have an eigenvalue of order $N$ and so a simple (or even a fragmented) "BEC".

But BEC, in the literal sense, is all about:

So, again, whatever we call "BEC" in the context of fermions is not literally and rigorously accurate.

Let's say you start with a dilute fermionic gas, that is weakly and repulsively interacting. The interaction strength is weak enough (and the gas is dilute enough) so that it is only sufficient to bind two atoms into a molecule. The molecule behaves like a boson and in a sufficiently dilute gas we can neglect intermolecular interactions so that we can have a BEC of molecules (yes you can still have bound states with weak repulsive interactions). This kind of ticks both the boxes above as it is a single "particle" (molecule) state and it is non interacting (approximately). Note that the fermionic nature of the underlying constituents does not matter (beyond allowing the molecule creation) because at weak interactions and low densities the radius of the bound state is larger than the atomic size.

Now make the interaction (still weak) attractive, so that you are increasing the density of the gas. The molecules start to overlap (intermolecular distance < molecular radius) so you can no longer ignore the intermolecular interactions. Thing is, the system starts becoming "dense". The wavefunctions are overlapping and you cannot have the clear and definite diatomic molecules that you had before. You do not know exactly which atom is paired with which. In this régime, the "molecules" are called Cooper pairs.

This is pictorially shown below (picture taken from here) , where the ellipses show the "range" of the pairing and bonds:

The discussion above follows heavily Leggett's book Quantum liquids, so let me conclude with a direct quote:

Whether one thinks of the process of Cooper pairing as a kind of BEC or as something completely different is perhaps a matter of taste; however, it is important to appreciate that it differs qualitatively from the BEC of dilute di-fermionic molecules [...].

Short direct answer to your questions then:

In the context of BCS-BEC crossover, your "BEC pairs" would be diatomic molecules formed of two fermions. This molecule behaves like a boson because, in the weak interactions and dilute limit, its size is bigger than the atomic radii so that the fermionic nature of its constituents is not relevant to the scattering dynamics. In other words, you can treat this "pair" as a single particle (molecule) and you can Bose condense them.

The BCS pairs are the Cooper pairs. When the size of the pair spans a much larger area than the atom itself, it becomes impossible to know which other atoms it is paired with. So you do not have clear cut composite systems like the diatomic molecules before. This idea of electrons in Cooper pair is usually oversimplified and leads to confusion. To quote John Bardeen (the 'B' in BCS) himself:

The idea of paired electrons, though not fully accurate, captures the sense of it.

What makes the difference is the spatial extent of the pair (molecule or Cooper) with respect to the inter-pair distance. You could also have a pseudo-BCS/BEC thing with attractive interactions and varying the density alone.

In the case of experimental cold atoms, it just worked out that weak values of positive and negative interaction strengths resulted in a useful phase diagram: 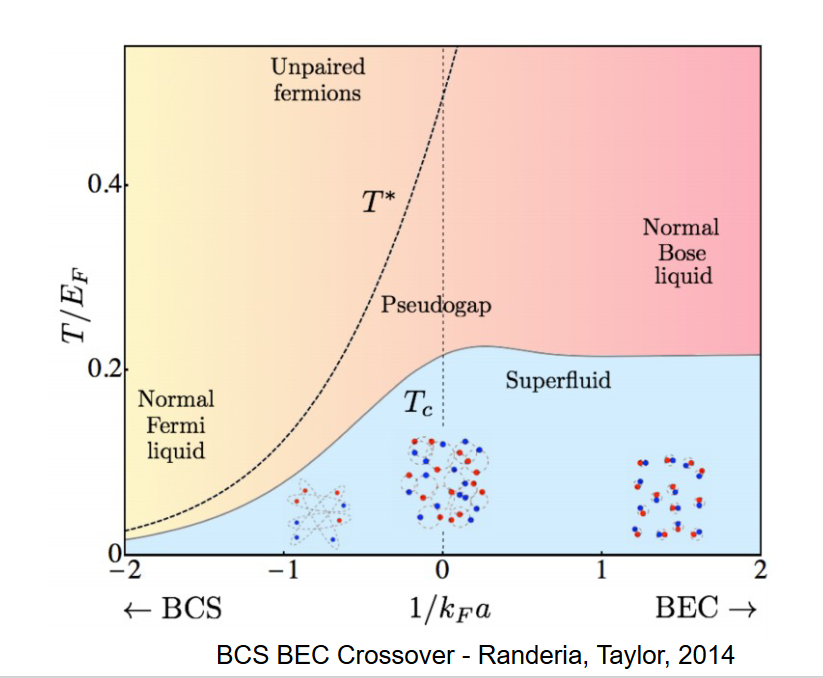 Not the answer you're looking for? Browse other questions tagged condensed-matter superconductivity bose-einstein-condensate superfluidity cold-atoms or ask your own question.

4
Has BCS Cooper pair condensate been observed in experiment?
1
Questions concerning BCS theory (particularly the "pairing Hamiltonian")
3
Questions around the BCS state
5
Why do pairing and condensation occur simultaneously in superconductors?
2
Superconductivity as a macroscopic phenomena
0
When can we replace the Cooper pair operator with its expectation value?
7
How to understand the "condensation" of Cooper pair in BCS theory?
3
What does phonon exchange do in the theory of superconductivity?