Why can't Dark Matter be curvature without a proximal mass source? [closed]

Ask Question
Asked 10 months ago
Active 10 months ago
Viewed 116 times
1
$\begingroup$
Closed. This question is off-topic. It is not currently accepting answers.

I don't understand why Dark Matter or MOND/"gravity works different on bigger scales" are the only options to explain the observational data.

Why can't it just be curvature without a "proximal" mass? Non-proximal in the sense that gravitational waves are "separated" from their source in space (but not spacetime). So, it wouldn't violate locality - it wouldn't be a "non-local" theory like Bahram Mashhoon (student of Wheeler who Google told me about while trying to answer this question myself) is trying to develop.

Secondary question: can it be shown that the idea I called "non-proximal" gravity is only possible with gravitational waves? Could curvature ever become relatively stationary while separated from its source?

Surely there was a lot of crazy, unmathable gravitational perturbations happening in the early universe... Just tell me why I'm wrong.

There's lots of crazy ways you can go about modifying gravity in the hope of explaining dark matter, but the point is that none of these modifications so far have worked. None of them properly describe our observations (this is what we should care about most), and the best current fit is simple CDM. If you want to propose something else, you really need to have a solid, consistent theory which makes specific predictions and fits with observation too.

Your statement/question, "tell me why it's wrong" isn't a good way of phrasing things. You really need to present a theory and calculate what it predicts, rather than having a vague idea and asking others to falsify it. People work on a huge plethora of ideas - the reason they're not all accepted as correct a priori is because they haven't been shown to be. The burden of proof is on the person presenting new ideas, not the rest of the scientific community to prove them wrong*.

I don't understand why Dark Matter or MOND/"gravity works different on bigger scales" are the only options to explain the observational data.

You're asking why theory X works at fitting the data but theory Y doesn't? This sounds more like a philosophical question.

---Edit---
Lastly, to tie in with your second question, we know the propagating degrees of freedom in GR: there are 2 of them, the two tensor modes (two polarisations of gravitational waves). We understand them quite well, especially since the detection of gravitational waves. They don't behave in the way you seem to be describing here.

In modifications you can have more propagating degrees of freedom, and/or scalar/vector modes, but these are already quite constrained such as by the CMB. In terms of the whole landscape of possible theories and their predictions, I'm not sure anybody can rule out things that behave like dark matter in some way, but it hasn't yet been put forward in a convincing way.

*Of course people do spend a lot of time finding problems & inconsistencies in physical theories, but that's not what we're talking about here. 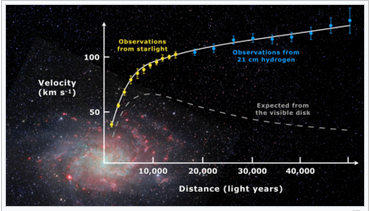 Rotation curve of spiral galaxy Messier 33 (yellow and blue points with error bars), and a predicted one from distribution of the visible matter (gray line). The discrepancy between the two curves can be accounted for by adding a dark matter halo surrounding the galaxy

Secondary question: can it be shown that the idea I called "non-proximal" gravity is only possible with gravitational waves?

Could curvature ever become relatively stationary while separated from its source?

Curvature appears in GR through the Einstein field equations, and mass/energy is necessary for curvature to appear.

Maybe a study of the GR theory before creating possible other views would be wise.

Not the answer you're looking for? Browse other questions tagged cosmology mass curvature dark-matter modified-gravity or ask your own question.

21
Why can't dark matter be black holes?
8
Does dark matter have to be matter?
7
Why can't "missing mass" (=dark matter) be photons?
1
Why dark matter and general relativity?
11
Dark Matter vs Modified Gravity
3
CMB anisotropies without dark matter