Is the Copenhagen interpretation still the most widely accepted position?

In my undergraduate Quantum Mechanics textbook (Griffiths), of the Copenhagen interpretation it says

"Among physicists it has always been the most widely accepted position".

I'm currently reading another book called "Philosophy of Physics: Quantum Theory" by Tim Maudlin. In the book's introduction, he points out that he does not even mention the Copenhagen interpretation in the rest of his book at all. His reasoning is that

"a physical theory should clearly and forthrightly address two fundamental questions: what there is, and what it does",

And then goes on to say that the Copenhagen interpretation does not address these questions.

I was just wondering if this is just a matter of philosophy that the author has a strong opinion about, or if the quantum world has moved on since I was an undergraduate and that the Copenhagen interpretation is now out of favour. If it is no longer the most widely accepted theory, then is it now the Many Worlds interpretation?

This is very hard to quantify, particularly because it's hard to define the population that should be under consideration. The best(-known) attempt to do this is reported in the paper

which presents the results of a poll taken at a conference on the foundations of quantum mechanics. The results largely speak for themselves, 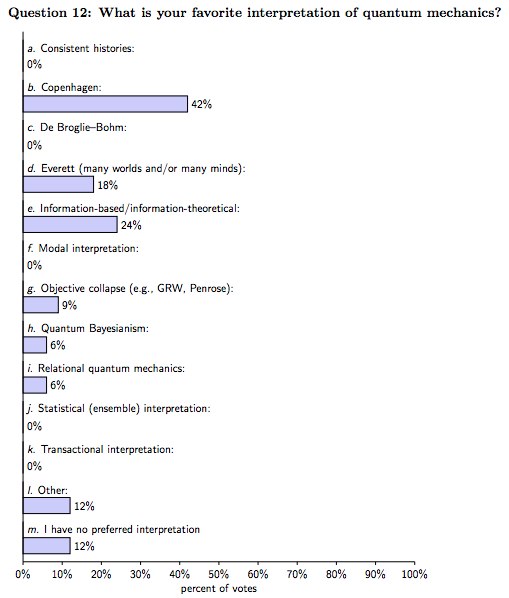 though there are plenty of subtleties to go with it, so do read the paper.

This is not conclusive, and it is a small sample which does not necessarily represent the views of a broader population that uses quantum mechanics on a daily basis but does not actively research the foundations, but it is indicative of the fact that the Copenhagen interpretation still holds a significant fraction of the mind-space when it comes to making sense of quantum mechanics.

It's difficult to answer this question because there seems to be little agreement about what the "Copenhagen interpretation" is.

I don't know a lot about Heisenberg's beliefs, but Bohr's view was basically that the formalism of quantum mechanics predicts the outcome of every experiment we can ever perform, and we can't reasonably demand more than that of any physical theory; there's no sense in searching for some deeper underlying reality that we could never know the truth of anyway since, by assumption, it doesn't relate to the outcomes of experiments. Wave functions and wave function collapse are examples of things that Bohr didn't believe in the reality of, because they aren't eigenvalues of measurement operators. This position is sometimes called "shut up and calculate" (originally by David Mermin, who disagreed with Bohr – but then, "big bang" was also coined by a detractor).

In introductory quantum mechanics courses, one is generally taught that there are two physical processes in quantum mechanics: unitary evolution according to the Schrödinger equation, and discontinuous collapse. I've never seen a standard, unambiguous term for this idea. I usually call it "undergraduate QM" or "the collapse picture". Many people seem to call it "the Copenhagen interpretation", even though it has nothing to do with any philosophy of Bohr or Heisenberg as far as I can tell.

Wikipedia's current "Copenhagen interpretation" article contradicts itself in its first two paragraphs, first describing it as the views of Heisenberg and Bohr and then as what amounts to the collapse picture.

Emilio Pisanty's answer quotes a survey in which 42% of those surveyed said Copenhagen is their favorite interpretation. Some of them probably meant shut up and calculate, and some probably meant the collapse picture. Some may have chosen it as a kind of default, with no particular idea of what it was supposed to mean.

I'm not certain what the surveyor intended it to mean, either. If it was supposed to refer to "shut up and calculate" then there ought to be another option for the collapse picture, and vice versa. But there are no other choices that are obviously meant to represent either one. ("Objective collapse" would seem to fit the collapse picture, but the two examples they give are both far more obscure than the standard model of undergraduate QM.)

Not the answer you're looking for? Browse other questions tagged quantum-mechanics quantum-interpretations wavefunction-collapse decoherence quantum-measurements or ask your own question.

20
Why is the Copenhagen interpretation of quantum physics the most widely accepted one?
10
What problem is the Many-Worlds Interpretation actually solving? Is it a reframing of the measurement problem?