Microwaves: why do they cook food?

I have looked up several explanations of microwaves and how they work but I am unclear on a few key parts of how they actually make the food hotter.

How I understand it now:
In addition to the light and the rotating plate inside the microwave unit there is something called a magnetron that generates microwaves and focuses them at whatever is on the plate. The nature of microwave waves is that they do not affect glass, some plastics and a few other things like metals which reflect the microwaves. The microwave wave that is generated by the magnetron enters one of the molecules of the food and “is converted to kinetic energy” (why? How? By what? What effects does that process have? Why does that kinetic energy make the food hotter?)

That’s it. Can someone please explain to me how the microwave wave makes food hot?

There are two ways of looking at it, one using the wave (classical) model and one from the particle (quantum) model.

The diagram below is perhaps a crude way of showing how the electric field component of the electromagnetic wave interacts with a water molecule inducing rotation. The water molecules is a an electric dipole owing to the spacial arrangement of the two hydrogen at one end and one oxygen atom at the other. It is overall electrically neutral, but is positive at one end and negative at the other forming a dipole, as shown.

At the electromagnetic wave propagates past the molecule, the electric field component alternates in polarity. When it does the molecule aligns itself (rotates) with the field due to the attraction and repulsion forces. That gives the molecules rotational kinetic energy.

In the photon (particle) model, the quantum energy of microwave photons is in the range 0.00001 to 0.001 eV which is in the range of energies separating the quantum states of molecular rotation and torsion. So in this model you can view the transfer of microwave electromagnetic energy in the form of photons absorbed by the molecule dipoles causing them to undergo rotation and torsion.

For a more detailed description of the interaction of electromagnetic radiation with matter, check out the following site: http://hyperphysics.phy-astr.gsu.edu/hbase/mod3.html 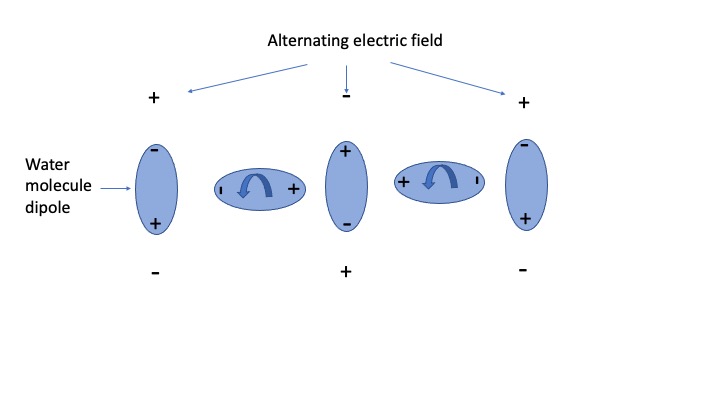 When you start cooking, the magnetron takes electricity from the power outlet and converts it into high-powered, radio waves. The magnetron blasts these waves into the food compartment. The food sits on a turntable, spinning slowly round so the microwaves cook it evenly. The microwaves bounce back and forth off the reflective metal walls of the food compartment, just like light bounces off a mirror. When the microwaves reach the food itself, they don't simply bounce off. Just as radio waves can pass straight through the walls of your house, so microwaves penetrate inside the food. As they travel through it, they make the molecules inside it vibrate more quickly. Vibrating molecules makes it hot so, the faster the molecules vibrate, the hotter the food becomes. Thus the microwaves pass their energy onto the molecules in the food, rapidly heating it up.

In simple terms. Microwave cook food by generating kinetic energy between the molecules of the food.

Not the answer you're looking for? Browse other questions tagged thermodynamics everyday-life microwaves food or ask your own question.

1
Do microwaves make polar molecules spin or vibrate?
20
What is the resonant frequency of liquid water?

16
Why do metal objects in microwaves spark?
2
Does the cell phone make dipole particles in our body dance the same way Microwave oven does in food
28
How do microwaves heat moisture-free items?
10
Why do we use microwaves in microwave oven?
2
What can I put in my microwave oven that won't get warm?
4
Microwaves and Water Molecules: Radar vs Cooking
20
Why are there different explanations of microwave oven heating, eg dipole alignment vs absorption? Is it quantum vs non-quantum?
1
Cooling at a Distance
12
Microwave inside-out cooking true/false