The role of the Sun in spring and neap tides

I am trying to understand how the Sun affects tides on the Earth's oceans and seas. 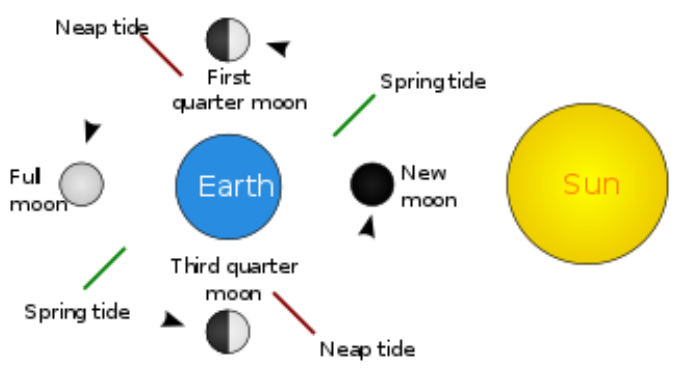 It is quite clear that when the Moon is in the first and in the third quarter, the Sun's and the Moon's gravitational forces are exerted in different directions (90° apart) and consequently the tidal range is at its minimum, and it is called neap tide.

It is also intuitive that when the Moon and the Sun are aligned on the same side of Earth (new moon), their gravitational forces sum up and cause the tidal range to reach its maximum (spring tide).

What I don't understand is the reason why spring tides are also caused by a full moon configuration, when the Moon and the Sun are still aligned but on Earth's opposite sides. Intuitively speaking, I would expect the resulting tidal range to be smaller than that occurring during a new moon (but still greater than a neap tide), because the Sun's gravitational force (though lower that the Moon's) actually opposes that of the Moon.

Having said that, am I missing some physical phenomena in the description above for the two spring tides to be equal (where I neglected the rotating Earth's centrifugal force for simplicity, though I'm aware of its role in tides) or am I just misunderstanding the fact that the two kind of spring tides actually have different ranges, although both greater than neap tides?

So: Then why does the Earth orbit the Sun and not the Moon?....clearly, the Sun's gravity is stronger (about 250x).

The resolution to this tidal paradox is that tides are caused by the gravitational gradient, and that gradient induces a quadruple moment in the Earth's shape.

so the stretching along the syzygy ($z$) is twice the contraction along the two transverse directions. Note also, that it transforms into itself under a 180 degree rotation:

It's a rank-2 tensor phenomenon, not a vector thing such as force (which changes sign under a 180 degree rotation). Hence, it doesn't matter which side of the Earth the moon is on.

Under a neap tide, the Sun induces:

which partially cancels the Moon's tide.

The "f" factor is proportional to the gradient of the radial field strength:

so the Sun's effect is the same order of magnitude as the moon, but a bit smaller.

You know of course that the tidal frequency due to the moon is 12 hours, that is, twice the rotation frequency of Earth. This is because on the side near the Moon the sum of Earth and Moon attraction is increased with respect to average, so the water level rises towards the moon. On the far side the the attraction is decreased so that the water level moves away and also rises. This double wave is aligned with the Moon, with some phase delay. The attraction by the Sun causes a similar wave with frequency of 12 hours, this time aligned with the Sun. When the Sun and Moon are aligned, whether on the same side of Earth or on opposite sides, the two waves coincide and spring tide occurs.

Not the answer you're looking for? Browse other questions tagged newtonian-gravity earth sun moon tidal-effect or ask your own question.

4
How gravitation affects tides
228
Does Earth really have two high-tide bulges on opposite sides?
51
Are there tides in the atmosphere?
0
By which factors are tides and waves affected?
3
What exactly is the energy source of tides?
0
In the difference between the sun and moon's tidal effects on earth, is density or distance a larger factor?
1
How much of the Tidal Energy can be attributed to the Sun?