How can I make sense of the work-energy theorem in the situation of a force applied on a disk?

Pretend that we are in space and that gravitational attraction is negligible. Now, imagine that there are two disks that are exactly the same. However, on the first disk, a force is applied tangentially and on the second disk, the same force is applied to its center of mass. The force is exerted over the same distance for both.

Now here is where I'm having problems making sense of the situation. Since the force is the same for both disks the horizontal acceleration should be the same. After travelling a distance $d$, both disks should have the same final horizontal velocity. The work done should also be the same.

However, since the force is tangential on the first disks, there must be a torque and the first disk would have gained an angular velocity. But $W = Δk_{rotation} + Δk_{translation}$. The work and the kinetic energy of translation can't be the same if disk 1 has rotational kinetic energy. 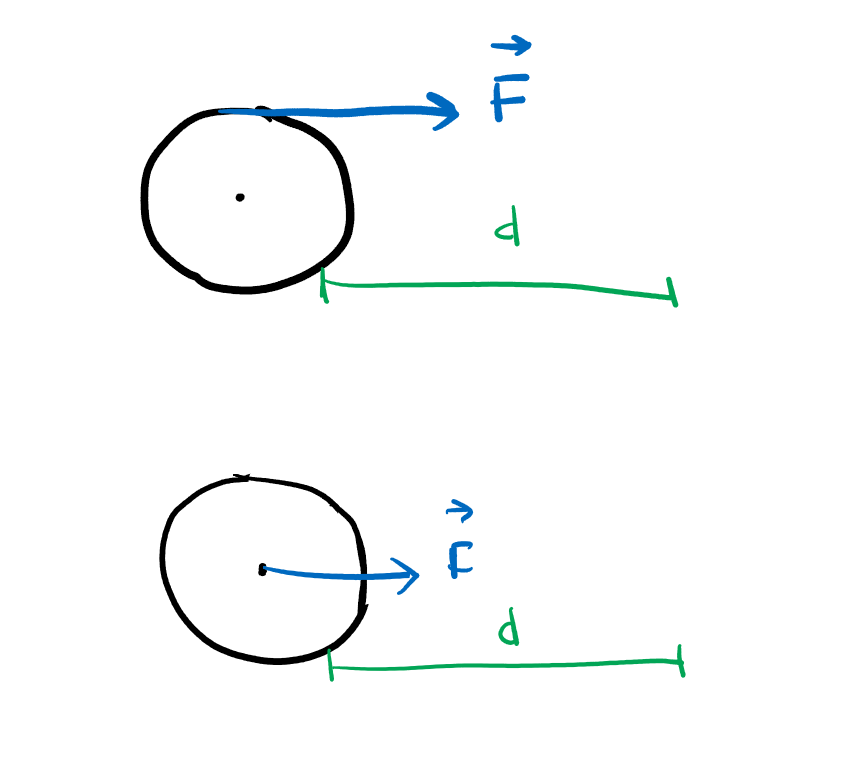 If you match time then their ending momentum will be the same, but the tangential disk will have higher energy corresponding to the rotational energy and the additional distance over which the force was applied.

From what I understand, in one case you imagine a force with constant direction, orientation, and magnitude to be tangentially applied, at each instant, on the part of the disk that has highest vertical coordinate with respect to an observer in a reference frame in which the disk is initially at rest. This means that such a force (field) is applied to a different part of the disk at each instant.

Let's fix such a reference frame. In both situations, the balance of linear momentum says that the motion of the centre of mass will be the same. So $\pmb{v}_{\text{cm}}(t)$ is the same in either case.

But in the case of the tangential application, there will also be a torque, and therefore a rotation of the disk. In this case the spot instantaneously in the upper part the disk has higher velocity than the centre of mass (both parallel): $\lvert\pmb{v}_{\text{upper}}(t)\rvert>\lvert\pmb{v}_{\text{cm}}(t)\rvert$.

The instantaneous rate of work (power) done by a force on a small element of matter at time $t$, in a specific reference frame, is given by the scalar product of the force and the instantaneous velocity of that small element: $\pmb{F}(t)\cdot\pmb{v}_{\text{element}}(t)$.

This is why in the tangential-application case the body has additional rotational energy after the centre of mass has been displaced by the same amount.

This problem is probably clearer when seen from the point of view of continuum mechanics, so I'll give this reference:

One way to approximate what happens to our intuition is to use the equivalence principle of relativity, and let gravity plays the role of the constant force in the space.

The case of a tangential force is like a yo-yo toy, that after being released, the string is carefully pushed upwards to keep the disk at the same height. As its acceleration is zero, the force in the string must balance its weight.

The case of centered force corresponds to the string of the toy totally unwinded, and just kept by the string in the same height. The force is the same as before.

For the first case, there is work because the force is moving: we raise our hand with the string to keep the disk in the same position. All the work is translated in rotational kinetic energy.

By the equivalence principle, that is exactly the situation to an inertial observer in the outer space, as stated by OP.

Not the answer you're looking for? Browse other questions tagged newtonian-mechanics energy rotational-dynamics reference-frames work or ask your own question.

1
Potential energy and the work energy theorem
2
Confusion about the total work done on an object applied by an upward force
0
How energy is ability to do work?
0
How do we get definitions of fundamental terms from a formula like the Work-Energy Theorem?
2
Work-Energy Theorem vs Angular Momentum Conservation in Central-Force Problem
0
Difficulty with applying the Work-energy theorem