Why can't I use just two angles when considering three neutrino oscillation?

I'm just finishing basic particle physics and I just learned about neutrino oscillation. Considering only two neutrinos, one can describe neutrino "mass states" (as we call it) with an angle $\theta$ like so:
$$ \pmatrix{|\nu_1\rangle\\|\nu_2\rangle}=\pmatrix{\cos\theta&\sin\theta\\ -\sin\theta&\cos\theta}\pmatrix{|\nu_e\rangle\\|\nu_\mu\rangle}. $$
We can do so if we ignore complex phase (which by itself can't be measured) and if we use the fact, that the wave function must be normalized. Essentially we are, of course, describing a 1-sphere, where each point of its surface describes unique combination of $|\nu_e\rangle$ and $|\nu_\mu\rangle$ such that the square of the magnitude of this superposition is always 1. All is good.
The weird thing is that the three neutrino oscilation requires three angles $\theta_{12}$ $\theta_{23}$ and $\theta_{13}$. Why? Isn't a 2-sphere good enough to describe all possible normalized superpositions of three states? Like this it seems to describe one extra rotation as such: 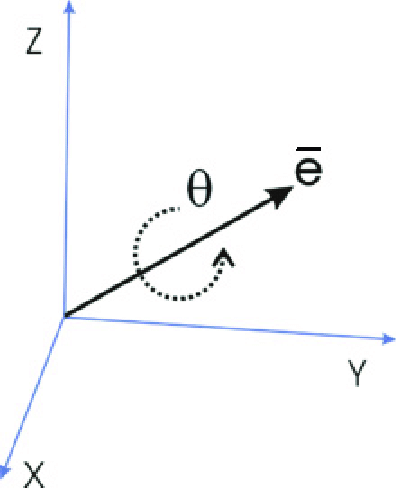 but that doesn't change the linear combinantion of the states!
Please don't respond with the derivation of the 3×3 matrix, that has been unhelpful so far.

Two angles are enough to describe the orientation of a vector in three-dimensional space, but it takes three angles to describe the orientation of an object. In aeronautics they worry about "pitch," "roll," and "yaw." If you are standing up with your arms held straight out parallel to your shoulders, you change your "pitch" angle by bending at waist (or nodding your head); you change your "roll" by moving your arms from straight out to left-up right-down (or vice-versa); you change your "yaw" by twisting at the waist, one arm ahead of you and one arm behind.

Another way to describe the orientation of an object are the Euler angles, whose Wikipedia page unfortunately suffers unnecessary math-nerd disease. Imagine that you are a snorkeling underwater and want to surface, but you find yourself in some funny orientation: head down-ish, belly sideways. First you would probably roll along your body's long axis until your belly pointed downwards, because that's the way people seem to like to swim underwater. Then you would pitch until your head was on top and swim to the surface. Once at the surface you'd probably have to rotate about your long axis again to see which way is the shore. That's the transformation described by the Euler angles: a rotation that puts your primary axis (for a disoriented swimmer, the line between the hips) in a convenient orientation, a rotation about that primary axis, and a cleanup rotation at the end.

In the abstract vector space of neutrino physics, there are two coordinate systems, which you should think of like the $\vec x, \vec y, \vec z$ coordinate system in your figure. One is the flavor basis: a set of vectors $\nu_e, \nu_\mu, \nu_\tau$ at right angles to each other. The other is the mass basis: a set of not-flavors $\nu_\text{light}, \nu_\text{middle}, \nu_\text{heavy}$ which are also at right angles to each other. To describe the orientation of one set of axes in terms of the other takes three rotations; with two angles you can get your head above the water but you might be stuck facing away from the beach.

Not the answer you're looking for? Browse other questions tagged particle-physics mass neutrinos beyond-the-standard-model or ask your own question.

7
Quark mixing vs neutrino mixing, mass eigenstates, weak states and detection
1
Comparison between two flavor neutrino oscillation and a system of up-spin and down-spin states of an electron?
0
How are neutrino energy eigenstates different to the momentum eigenstates?
1
Why should $\nu_\mu\to \nu_e$ oscillations be expected to be unobservable in short baseline experiments?
4
Are neutrinos just different states of a single particle, in essence?
0
How do I solve Schroedinger's equation for sterile neutrinos?
2
What is a neutrino state if not a particle?
2
PMNS matrix versus CKM matrix -- how precise is the analogy?
0
Can there be Neutrino and antineutrino oscillations?