Angular velocity or frequency in an uniform circular motion? (for students of an high school withouts the calculus)

In an uniform circular motion, we know that the angular velocity is:

Now the frequence $\nu$ is the number of cycles per second (in Italian language cicli al secondo),

But into my textbook the instantaneous angular velocity $\omega$, where in the SI it is measured in radians per second ($\text{rad/s}= \text{s}^{-1}$), because the $\text{rad}$ it is not a true unit of measure. There is written also this:

In this exercise, for example, it is used 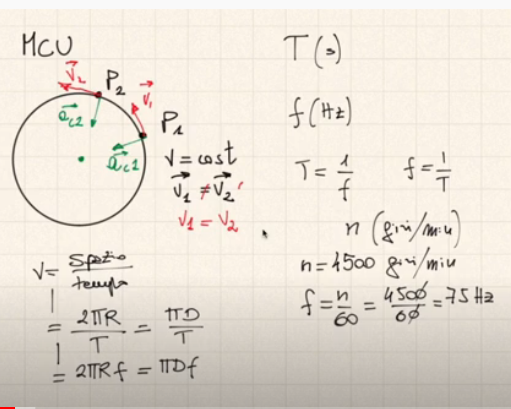 is there a trick or expedient to tell if it's angular velocity or frequency?

Your book uses the following relation

So it's in $s^{-1}$ units. It's because radian is a dimensionless unit in SI thus rad/s is equivalent to $1/s$. Frequency $f$ or $\nu$ are in units of $1/s$ and period $T$ is in second. In practice $rad/s$ is used for angular frequency and $1/s$ is for normal frequencies not for angular frequencies. I think rad term was omitted with the formulation of quantum mechanics. For instance $E = hf$, energy is in eV or in J and frequency is in Hertz thus planck constant is in $J\cdot s$ but h-bar (reduced planck constant) is expressed in units of $J\cdot s /rad$

It should not create confusion because a magnitude has some units associated to it, but the inverse is not always true, so it can be dangerous to think it that way.

In other words, the units can give you clues of what it is, but it is not the only thing you should look at.

For example, energy is measured in "joules", $1\text J=1\text N\cdot 1\text m$, but on the other hand, torque has also units of $\text N\, \text m$. No one would ever think of adding energy and torque; in fact, torque is a vector and energy is a scalar...

So units must not be our only consideration.

It's true that the fact that radians are a "ghost unit" is misleading. Then, there's this truly bad habit of the physicists being lazy (me included, of course). Physicists usually work with $\omega$ quite more often than with the "actual" frequency... so they've ended up calling it frequency as well.

Nevertheless, the unit for "real" frequency has a special name: Hertzs (Hz). So in sum,

This, however, is not an absolute truth, each author can have his own criteria.

As I see it, if they just say "frequency", you should stick to the literal meaning and they could not punish you. Especially, when it comes to official exams and all that.

...Unless there's something in the further development that reveals it was actually $\omega$, you know, it's usually relying on the logic and the context...

So if the circle rotates at $f$ revolution per second, a point on the cirumference moves a distance $2\pi r f$ in one second, so its velocity is $2\pi r f$.

If we measure the rotation speed as $\omega$ radians per second, a point on the circumference moves a distance $r\omega$ in one second.

Since other formulas for circular motion are also simpler when measuring angular velocity in radians/sec, a good way to avoid confusion is to convert other units (for example revolutions per minute) into radians/sec at the start of the calculations.

When using calculus, all the formulas use angles measured in radians, not revolutions or degrees, so it is better to use radians right from the start.

I think it should also be pointed out that angular velocity is what is known as a vector which means it has both magnitude and direction. Your equation for instantaneous angular velocity, should really be expressed with a a unit vector so that

where the unit vector $\hat u$ points in the direction of the axis of rotation. A lot of other physicists use velocity in non-vector form too. That is technically incorrect.

Angular velocity is a measure of how fast the angular position of an object changes with time, relative to some point in space.

Angular frequency or angular speed is a scalar measure of this rotation rate without reference to a particular point in space or orientation.

Angular velocity and angular frequency can be used to both explain the same thing. Remember that the prior is a vector and the latter is a scalar.

is there a trick or expedient to tell if it's angular velocity or frequency?

One is a vector and the other is a scalar. Apart from that, see the other answers and your intuition and experience in the future will make you more comfortable with such terms.

Not the answer you're looking for? Browse other questions tagged kinematics frequency rotational-kinematics units si-units or ask your own question.