Are these 4 resistors connected in series or parallel?

This might seem like a simple question I'm asking too much about, a simple clarification is all I need. 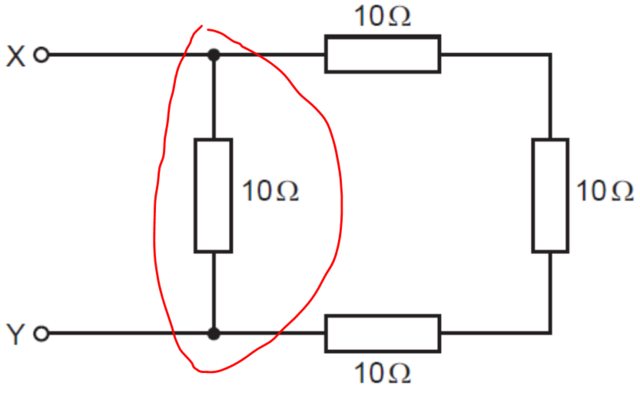 There's no details of current or potential difference provided at all, and it's known according to the mark-scheme that the circled resistor is connected in parallel with the 3 series resistors. Why can't I suppose the top and the bottom ones to be in parallel, and that parallel network to be in series with the other parallel network of the left and right resistors? I've seen a few existing questions similar to this but they didn't help. I've even come across a similar circuit before and considering the total resistance how I'm trying to now, I was correct.

I'll appreciate any help at all, thanks.

note from the future: I've deleted my second question because understanding the answers here is indeed enough to help in solving most related questions, particularly Noah's and Philip Wood's, but not that the others aren't helpful.

Something to note is that any interruptions at all (e.g even connection to a terminal) render a sequence of node connections as one separate network up to that point, this makes it easier to know when you can assume multiple combinations to be in parallel or series since you can distinguish between separate combinations easily.

What you can correctly say is that the top, right hand and bottom resistors constitute a series combination that is connected in parallel with the left hand resistor, across X and Y.

I'll just add my two cents to how I would approach such a problem systematically. Look at the whole circuit and look for resistors that are connected without any connection to anywhere else between them (for example a connection to a terminal or another part of the circuit, that disrupts the continuity of node connections). Group these in your mind into a single equivalent resistor. These are all the resistors which are directly serial. In your case the right three ones.

Now look at the updated network. Look for pairs of resistors which share a common start and end point. These are parallel and can be grouped together as a single resistor. In your case, that is the left resistor with the group you created in the first step.

In your case, at this point you are done. If the circuit is more complicated, repeatedly alternate these steps until you are left with only one resistor.

If ever in doubt, just redraw:

You are free to bend and stretch out empty sections of wire as you please, as these have 0 effect on anything happening in the circuits. If you do so here, we can nicely see 3 resistors in series, all in parallel with a single resistor

The one marked in red is in parallel with the remaining three. Those three are in series with each other.

0
Ohms law and multiple resistors
0
Can delta-star conversions be used to resolve any circuit of resistors into series and parallel combinations of resistors?
0
Is there more than one legitimate way to determine whether resistor are in series or parallel?