On what things can two observers agree or disagree?

This question was inspired from the fact whether a moving body can become a blackhole in a frame of reference. On looking it up here, I found the answer was that its not possible since it violates priciple of relativity as you can be in a frame where the black hole was never formed and was ordinary matter.

So, I concluded that since it cannot be a blackhole in one frame and a normal mass in another then its not possible. What I don't understand is this?

(i)Why does that violate the principle of relativity? Which law is violated?

Also value KE can be disagreed upon as the energy conservation is still conserved in each individual frames so signals can disagree on KE.

This is not uncommon idea from beginners: if relativistic mass increases without bound, then at some speed, a blackhole should be formed.

Let's say we're talking about a uniform density prolate spheroid with major axis $a$ and minor axis $b$. Also, specify that:

If you boost that along its major axis with Lorentz factor:

the object is now a sphere of radius $b$ and "relativistic" mass:

The Schwarzschild radius for that is:

et voilá, it's a blackhole.

Does that violate special relativity? Well, if the spacetime as defined by $g_{\mu\nu}$ around this moving blackhole transforms, under a boost into the mass's rest frame, back into a nominal non-blackhole spacetime, then the answer is probably: NO.

I will state, without proof, that this is not the case.

If it were the case, it would pose problems for special relativity.

It would mean that you and I, all of us, are blackholes in valid inertial frames, right now. Also: in much slower frames, we would not be blackholes, but the Earth (with its great mass) would be a blackhole. It's just a mess that contradicts not only observation, but also reason.

If it is not that case (that blackholes can be boosted away), but it remains true the relativistic mass causes blackhole formation, then: there is an absolute rest frame in special relativity.

All you need is a bunch of identical masses. You boost them into all directions and measure the velocity at which they become blackholes, as a function of direction:

If space (and I mean absolute space) makes any sense, then there is some boost $\vec u$ such that:

and that is the absolute rest frame of space.

An important idea of special relativity is that motion is relative (we've all heard that many times). What it means is that you can't move relative to space. No matter how fast you go, your (empty) space slice of spacetime looks the same, and your time ticks the same. It is only when you have other objects and various events and different frames that observers disagree on what constitutes "space" and "time".

The things that relativistic observers agree on is much like classical physics. You agree on what is real. Things that are real are events that happened. How many objects there are. The order of causes and effects. Perhaps it can be summarized as "You don't change an object by running past it."

As in classical physics, there are many things you do not agree on. Whether one object is to the left or right of another. How fast a given object is moving and how much kinetic energy it has. How long the X component of an object's length is. These are things that depend on frame of reference. Different inertial frames of reference may move with respect to each other at constant velocity and have different orientations. You can also choose different length and time units, but we will gloss over that.

Different frames of reference sometimes make it hard to see the things that are real, such as conservation of energy. Different observers see two objects with different energies. They bounce off each other. Both observers measure the same amount of energy after the collision as before. Frames of reference may disguise something as simple as how big an object is.

In special relativity, one major difference is that time works differently than your classical intuition leads you to expect. This is causes confusing ladder paradoxes, twin paradoxes, and so on. Most of the time, people start with the fact that the speed of light is constant and arrive at all of these. This is because you only need one postulate, and it quickly leads to the correct math. If you have gone though that, it may help to look at how time is different.

In classical physics, time is absolute. The history of the universe can be divided up into a series of moments. All observers see the same moment as happening now. They can identify any slice of history by its time coordinate. Time is an intrinsic property of that slice.

We are used to this. It causes no confusion that what I consider to be one place, he considers to be two places

The most counter-intuitive concept of special relativity is that time is really like space in this regard. We just move too slowly to see it. This violates our notions of what time is.

To get another point of view on this, consider that light moves at $3 \times 10^8$ m/s. I am comfortable at $3$ m/s. Imagine a world where the fastest motion is $3 \times 10^{-8}$ m/s. This is about a meter/year, the speed of a glacier. A glacier world physicist would have the same problems understanding our everyday classical physics, that I have understanding relativity.

If you have started from the constant speed of light and arrived at space time diagrams, you can see our confusion about measuring the length of a relativistic ladder. 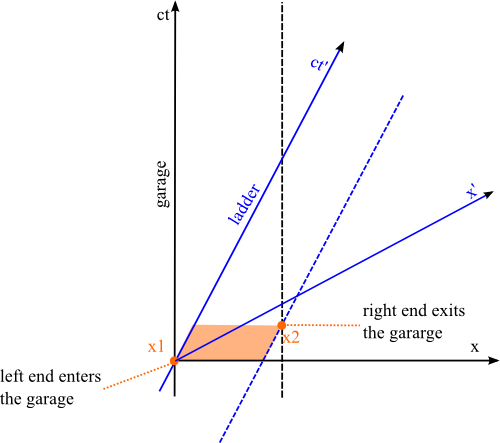 All observers agree on the proper length of the ladder. That is the length in a frame where the ladder is at rest. To get the length, you measure the $x$ coordinates of the ends and subtract.

In a moving frame, an observer measures a contracted length. He can then do a calculation to figure out the proper length. Why does he need to? The ends have to be measured at the same time, this is where it gets tricky.

The point is that the garage frame does not measure the proper length because the head position is measured earlier that the blue frame foot. The head hasn't traveled far enough yet. This makes the length shorter.

This is why it is useful to make a 4D spacetime and create a metric for it. The metric calculates the universal proper length of the ladder. The calculation takes both $x$ and $t$.

Getting back to black holes, you can see that length contraction does not change the ladder. It does not become more dense, and more prone to forming a black hole.

(i)Why does that violate the principle of relativity? Which law is violated?

I try to answer both of the questions at once. The observers will always agree on $ds^2$ both in special and general relativity.

They both agree that the speed of the light is locally c in vacuum.

They also agree on number of the particles.

So the observers have to agree on number of the black holes.

since it cannot be a blackhole in one frame and a normal mass in another then its not possible. [...] Why does that violate the principle of relativity?

The principle of relativity says broadly that all speeds are equivalent. In Galileo's ship, you can't do any experiment that will tell you the ship's speed. If assembling a known quantity of matter (like a known number of 1kg weights) into a planet, and observing whether it collapses into a black hole, could tell you the speed of the boat, that would violate the principle of relativity.

Observers don't really disagree about anything – at least not in any sense that deserves the word "disagree".

If a vehicle with a siren rushes past you, you'll hear a pitch that's first higher, then lower than the pitch heard by someone riding on the vehicle. Would you say that the two listeners disagree about the pitch? I wouldn't. They just had different experiences, as different people are wont to do. Both listeners agree that the listener on the vehicle heard an intermediate pitch, and the listener on the ground heard a higher-then-lower pitch. They agree that the latter is a Doppler effect. They agree about everything that happened. Only if you use a word to mean two different things in the same sentence, like using "pitch" to mean both "pitch heard by this listener" and "pitch heard by that other listener", can you manufacture a disagreement.

In Newtonian physics, if you use "egocentric Cartesian coordinates" with yourself at the origin, and you label the coordinates in the same way as someone else who is also using egocentric coordinates, you could claim to "disagree" with them about the coordinates of things, but it's equally silly.

In special relativity, egocentric coordinates include a time coordinate too, but it's the same story. You only "disagree" with someone in relative motion if you're both using egocentric coordinates with the same labels, and no one ever does that. You will always agree with everyone else about the UTC time of an event, and its latitude and longitude and altitude above sea level. That's a well defined system of coordinates that people actually use in real life.

Not the answer you're looking for? Browse other questions tagged special-relativity reference-frames observers or ask your own question.

71
If a mass moves close to the speed of light, does it turn into a black hole?

11
Time Dilation - How does it know which Frame of Reference to age slower?
2
Clarification for the mutual time dilation for two observers in their inertial frame of reference
15
Physical intuition for why proper time is an invariant quantity
0
Does the Lorentz transformation only apply to corresponding observers?
0
Pendulums in inertial and non-inertial frames
1
A Hidden Principle in Relativity