Purcell enhancement at an angle: Direction of charge oscillation

It is well-known that a hydrogen atom in free space prepared in an excited state, for example $\left| 2p_y \right\rangle$, will over time decay into the ground state $\left| 1s \right\rangle$. If not perturbed by any measurement of the atom or the emitted photon it will undergo an evolution through a superposition of the excited and ground state $$A(t) \left| 1s \right\rangle + e^{-i \omega t} B(t) \left| 2p_y \right\rangle$$ which leads to an oscillatory movement of the charge density along the $y$-axis. See for example this answer or this applet. This oscillating dipole causes the emission of a photon with a polarization given by the orientation of the dipole ($\hat{E} = \hat{d} = \hat{y}$ in this case).

This principle also applies to molecules, just with more complicated orbitals. Unlike the hydrogen atom they aren't spherically symmetric, hence the dipole moment is given by the geometry of the molecule. If you know how a molecule is embedded in a crystal you also know the polarization of the photons emitted by it.

Things start to get more complicated when the excited molecule is forced to interact with its own radiation inside a Fabry-Pérot cavity. If the cavity is resonant with the molecule's transition, the emitted field builds up in the cavity. The relative phase between the field and the charge oscillation is such that the molecule transfers energy to the intracavity field, making the molecule decay to the ground state faster than in free space. This is similar to stimulated emission, just that here one part of a photon triggers the emission of another part. [There is also a less intuitive explanation of the Purcell effect via the density of final states, for reference see Mark Fox – Quantum Optics: An Introduction chapter 10.]

My question is about the case when the cavity mode dictates the polarization of the field. This happens for example if there is a birefringent crystal in the cavity, see for example Wang et al. PRX 7(2) 021014 (2017). Light polarized along the fast axis of the crystal sees accumulates a different round trip phase than light polarized along the slow axis. Therefore the resonance frequency for the these two polarization eigenmodes is different. 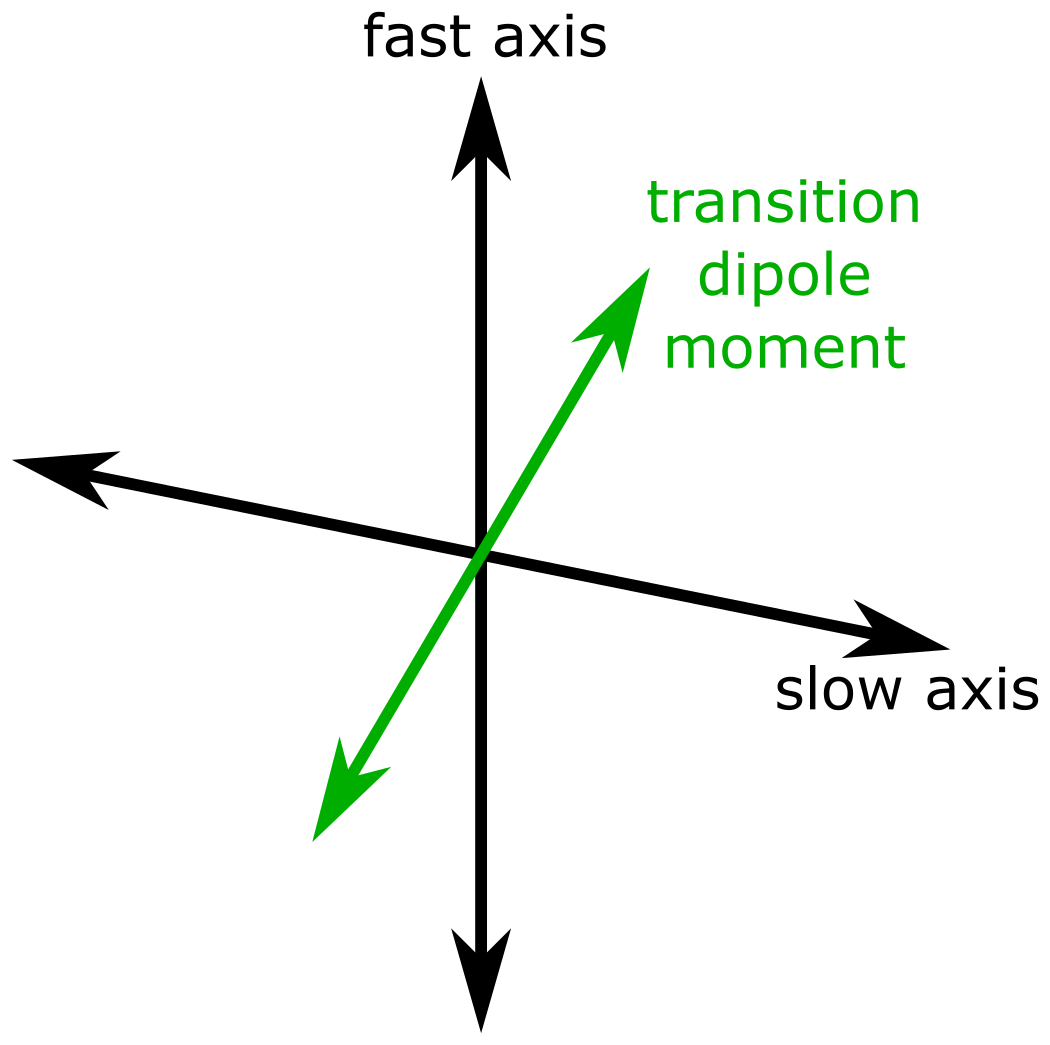 There is a correction factor $\xi^2 = \left| \hat{E} \circ \hat{d} \right|^2$ for the Purcell factor $F_{\text{P}}$ (equation 10.35 in Mark Fox' book) which takes this into account, but it doesn't talk about how the charges oscillate. I could imagine two different possibilities, both not convincing me:

How does the center of charge actually evolve in the molecule in the birefringent cavity? For simplicity let's assume that the cavity effectively only supports this single mode and the molecule decays on the Purcell-enhanced transition $| e \rangle \to | g \rangle$ while al other transitions are much slower, like in the follow-up of the cited paper: Wang et al. Nat. Phys. 15(5) 483-489 (2019).
quantum-mechanics electromagnetism wavefunction quantum-optics cavity-qed
Share
Improve this question
edited Dec 22, 2020 at 17:25
A. P.
asked Dec 16, 2020 at 20:40

EDIT: I will provide some details on the dynamics in Scenario 1 mentioned below, since this seems to be the OP's central question, as clarified in the comments.

In the single transition case, one can write down a Master equation for the system, which reads

Here, $\rho_t$ is the density matrix of the ground and excited state of the single transition ($t$ for "transition"). This Master equation therefore only contains the degrees of freedom of the transition, because we have traced out the field degrees of freedom within the Markov approximation, as usual in weakly coupled quantum optics.

The effective Hamiltonian and Lindblad term are given by [1]

This is about the simplest Master equation you can get, with a decay rate $\Gamma_t$ and a corresponding frequency shift $J_t$ and it generally applies for a single transition in a dielectric environment, as long as we are at weak coupling (see [1] for details. $\omega_t$ is the bare transition frequency in free space.

The main question is: what are the values of $\Gamma_t$ and $J_t$ in the electromagnetic environment? This is what is influenced by structure of the environment, such as the cavity or material properties. As also stated below [1]

While in the OP's geometry, the Green's function might be slightly complicated, the above shows that the dynamics qualitatively stay the same, no matter the geometry. There is decay and a frequency shift, that's it. The axis changing charge dynamics do not happen. The reason is as already syspected by the OP: due to the single transition, the dynamics have been confined along a single axis given by the dipole moment vector.

Note, however, that the above situation can be physical. Depending on the natural line width and the frequencies involved, the dynamics may naturally be restricted to a single transition by resonance conditions.

I'll start with the last question.

What actually happens in the described situation?

It depends what precisely is meant by "the described situation". When I read through the question, I see a few different scenarios, mixing quantum mechanical state decay via dipole transitions and classical charge oscillation concepts. In the following, I will try to address each of them separetely.

We consider the following model: A single dipole transition with its dipole moment in the described direction relative to the slow and fast axis of the cavity. In this case, the most general expression for the Purcell enhancement is given in terms of the Green's tensor of the surrounding dielectric structure. The full cavity enhanced line width is (see [1])

where $\omega_A$ is the transition frequency of the atom and $\mathbf{r}_A$ its position. Compared to the formula in Mark Fox' book, this formula is more general, not making assumptions such as single mode cavities etc. The polarization response is fully included in the Green's tensor.

Most notably, the Purcell enhancement is a statement about the decay rate of the excited state via the transition. This means that the slow and fast direction are in a sense summed over in the above formula (due to the dot product on both sides). The birefringence property will therefore only cause an interesting dependence on the dipole moment direction, since the Green's tensor is not isotropic in this case. However, it will not change the decay dynamics of the excited state, which still just decays with a modified rate.

First to answer the obvious question: How is this different from a single transition model? The point is that in general, in particular for degenerate systems, the excited state can decay via multiple channels to the different degenerate ground states. In that case, we have to sum over multiple transitions $i$, such that

but the statement above remains true.

Scenario 3: A realistic atom in an excited state

For the realistiic case, everything depends on the parameters and physical setting. Which states participate in the decay dynamics? Which transition channels are important? Maybe we even have strong coupling which fundamentally changes the dynamics from pure decay to oscillatory behavior? This scenario is to broad to address in general.

In this general case, however, dynamics such as described by the OP are conceivable.

For classical charge oscillation, we do not have a notion of quantized orbitals or the state structure defined by the atom. In a complicated environment as the birefringent cavity, a rotation of the charge oscillation can happen. Even a separation into a multi-modal oscillation is possible.

Not the answer you're looking for? Browse other questions tagged quantum-mechanics electromagnetism wavefunction quantum-optics cavity-qed or ask your own question.

41
Is there oscillating charge in a hydrogen atom?

3
Alkali atom in oscilating electromagnetic field
9
What is the "direction" of the transition dipole moment? (Understanding Eq. 9.29, Charge and Energy Transfer 3rd Ed, May & Kuhn)
4
Quantized light-atom Hamiltonian
6
Atom - light field coupling and emission process
8
Purcell effect in the non-dispersive regime: atom in a cavity for moderate $\Delta$
4
Obtaining equations of motion for a three-level atom and plasmon system
2
Can a quadrupole form in a purely organic crystalline material?
1
Question on the creation of an entangled photon pair in a specific realization of the EPR-Bohm Experiment