Why do we need an absolute temperature scale?

I am a high school student and I am little confused in thermometry, My textbook says that, "the liquid in glass thermometer might read the same temp. at the chosen reference points i.e boiling point of water and melting point of ice, but they read differently at an intermediate temperature, therefore, an absolute temperature scale is needed which is not dependent upon the material and by this idea we come over the Kelvin scale, which almost reads the same for all gases if their densities are very low." I don't understand these lines. how can they read differently, if they are varying linearly with the temperature?

Basically I want to know why do we need an absolute scale if we can measure the temperature by using other scale? If anyone will explain his by using some examples, it would be very helpful. 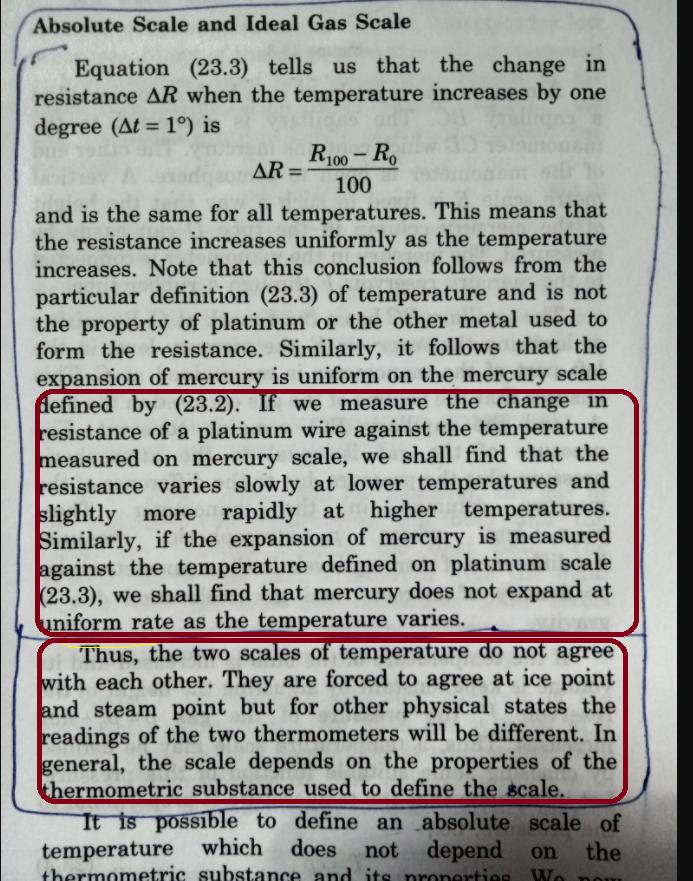 also for reference , please check out this video mid section(roughly from 12:00 to 15:00), and then please explain it to me what he is trying to say , the link is https://www.youtube.com/watch?v=E9cOAMhFUz0&t=857s

I think the text is misleading in that this is not the reason we need an absolute temperature.

It used to be that people thought temperature was relative (something is hotter than something else) and then choose scales with two definite points (e.g. boiling of water, melting of ice, etc.) and interpolated linearly between the two points. Basically, divide the interval by $N$ equidistant points and call that difference between points "one degree". All linear scales with the same two reference points will actually be the same scale (there is only one line crossing two points).

If however they choose different reference points, the may or may not give the same value at some definite point, depending on the definition.

(Scales which interpolate non-linearly between the reference points are not that used as far as I know, but in that case they might have multiple intersections as pointed out by @Semoi)

For example, using the two most widely used scales, Celsius are set at 0C for ice melting and 100C for water boiling. In the Fahrenheit scale, ice melting is 32F and water boling is 212F.

So why do we need an absolute temperature...?

If the answere were "so that there are no inconsistency" we could just choose one (say, Celsius) and declare it the scale, as we did for the meter, the Kg, etc.. Turns out, temperature is not relative, there is a minimum value which is the "coldest" one! The reason we use Kelvin is that its zero value ($0K$) is the lowest physically possible temperature value. You can not go below $0K$ at all! [let alone some very esotheric kind of systems for which the temperature is weird - we neglect it here.] So the Kelvin scale is absolute in the sense that one of the reference points is set by the laws of physics as the actual 0. The second point can be arbitrarily chosen. For the Kelvin scale, the decision was to leave the interval equivalent to that of the Celsius scale (so that 1 degree C difference is 1 degree K difference). But the Kelvin scale is not the only absolute scale: you can choose another reference point and end up with another scale, such as the Rankine scale. For the Rankine scale, you get it by multiplying the K value by 1.8 $$R=1.8 K$$

so you see that $0K$=$0R$ but all other values are different! Even in an absolute scale we can have multiple possibilities in choosing how to define it. The fundamental thing is that $0$ is the absolute zero, i.e. the lowest possible temperature!

[I am assuming you are not an expert in thermodynamics and I am therefore simplyfying! Be aware of this] The precise answer is complex, but to grasp it intuitively, think that, according to thermodynamics, the mean kinetic energy $K$ of a molecule of an ideal gas in 3D at temperature $T$ is given by $$K=3/2k_B T$$ where $k_B$ is a constant. You see that if $T=0$ then $K=0$ and because the kinetic energy cannot be negative (because $K\sim v^2>0$ where $v$ is the speed of the molecule) that has to be the the lowest possible value. So the Kelvin scale (or any absoulte scale) allows to directly put a value of $T$ in this formula such that no negative value is possible!

And that is why we use the Kelvin scale!

What was your book trying to say?

The book was referring, as pointed out by @alephzero , to the fact that real materials do not expand linearly. Water is definitely at $0C$ when ice melts and at $100C$ when it boils but in between, if you plan to measure the temperature by using the material's dilation (as in a thermometer with quicksilver), it can give wrong results (i.e. a 10 % expansion does not mean a 10 % increase in temperature). So after having defined your scale, you also need a smart way to measure the actual temperature. Using ideal gas is an idea, as they follow a very idealised behavior. Or using physical phenomena with a distinct temperature dependence. But that is not a problem you solve by simply changing scale. You could use an ideal gas and the Celsius scale, by correcting accordingly your formulas.

Real liquids do not expand "linearly" with temperature, and the variation is different for different liquids. So if you try to define a temperature scale using a liquid-in-glass thermometer, your scale will depend on what liquid you use.

For example, the expansion coefficient of water is negative between $0^\circ$C and $4^\circ$C. A water-in-glass thermometer would be useless between about $0^\circ$C and $8^\circ$C, because the water level in the tube would be the same for two different temperatures, one below $4^\circ$C and the other above it.

Of course the expansion of other liquids are more nearly "linear" than water, but the Kelvin scale is independent of the way any particular thermometer is constructed.

A linear curve (straight line) has two degrees of freedom: Its slope and its offset. If you have two linear temperature scales, which yield the same value on two points, the curves are equal. Therefore, I can not see how your book could be correct. Please check, whether or not it really states that both scales are linear and how this linearity is confirmed. Especially for the linearity check of a measurement device one usually takes an external reference, which has a "much higher" precision (often one takes defined standards).

If we drop the linearity assumption, the text becomes clear. The following plot shows two temperature scales which yield the same result at 0°C (freezing of water) and 100°C (boiling of water at $1atm$). 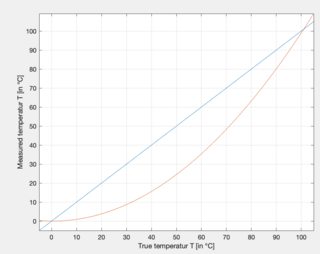 The property of a solid (like its thermal expansion coefficient) or a gas (like the pressure) often depends non-linearly on the temperature. Thus, we are often allowed to take a linear assumption with a certain temperature range, but if we leave this range the non-linear effects become obvious.

5
How do Temperature Scales work?
6
Didn't we mess up with the temperature?
4
How do we know -273.15 centigrade is 0 kelvin?
1
How to achieve temperature below absolute zero?
2
What is highest possible temperature?
9
The significance of kelvin as a unit of absolute temperature