I'm relatively new to Feynman diagrams and have a question about loops. Consider the following diagram: 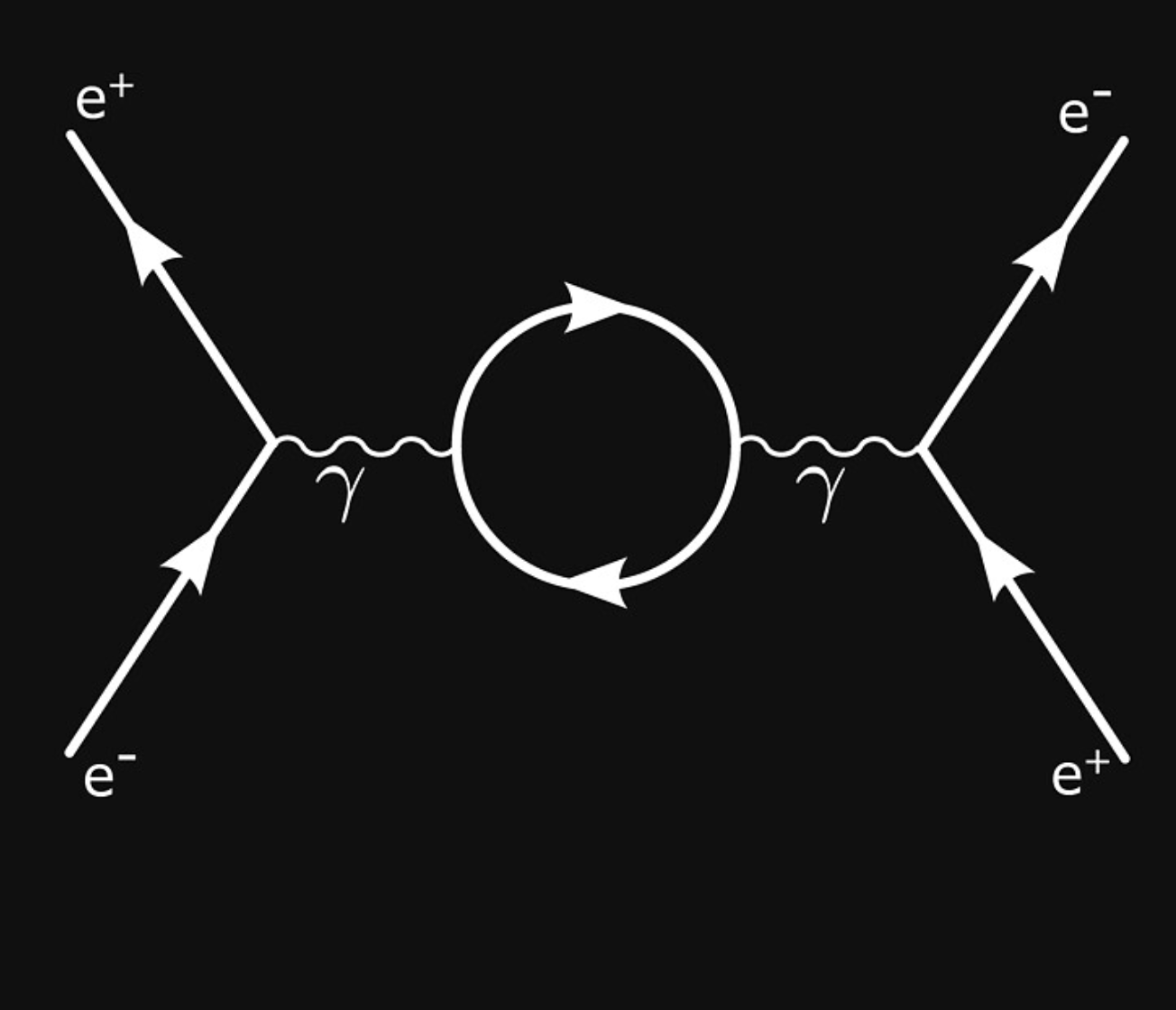 I understand the electron positron annihilation resulting in a photon but I do not understand the loop in the middle. I've read that the integral is convergent for the loop but I'm looking for a physical explanation. What physical phenomena is happening at the loop part?

In you diagram a (virtual) photon decays into a ''virtual'' electron-position pair, which is annihilated immediately after to create another (virtual) photon. It is like the photon, instead of moving with no problems in the middle of the diagram, were interacting with the vacuum. From a purely pictorial point of view, this is not surprising, because that photon is actually a ripple in the photon field, which constantly interacts with the electron field... and this complex field-field interaction is correctly described only by a large number of particle diagrams.

Leaving aside the photon of this particular example (which is its own antiparticle), ''virtual particles'' are popularly described as a particle and an antiparticle which exist for an extremely short time, and then mutually annihilate. These virtual particles are a by product of the ''particle-based interpretation'' of QFT and are often termed ''off-shell'' because they do not satisfy the energy-momentum relation (note that the external legs of the diagram are "real particles", namely "on-shell" particles).

In some cases, the virtual pair may be boosted apart using external energy so that they avoid annihilation and become real particles. For example, in an accelerating frame of reference there is the Unruh effect, where the vacuum of a stationary frame appears, to the accelerated observer, as a warm gas of real particles. Another example is pair production in very strong electric or magnetic fields (like the ones in the magnetosphere of neutron stars).

In your example, however, you are dealing with the ''most genuine'' idea of virtual particles: a pair (electron-position) is created out of vacuum via the usual QED vertex with the photon and is immediately annihilated (this is the interpretation of the loop). The electron and the position in your example can not be on-shell, but this does not mean that their propagator is null (the more you go on shell the more the propagator blows up and counts in the process).

In short, you are dealing with a one-loop Feynman diagram (a connected Feynman diagram with only one cycle): such a diagram can be obtained from a connected tree diagram by taking two external lines of the same type (in this case the e+e- legs) and joining them together.

These kind of diagrams correspond to the quantum corrections to the classical field theory: since they only contain one cycle, they express the next-to-classical contributions. The Casimir effect (in special relativity) and Hawking radiation (close to the event horizon of a black hole) are examples of phenomena that can be studied by using one-loop Feynman diagrams: are the quantum corrections to the classical vacuum in flat and curved spacetime, respectively. The related phenomenon is the ''vacuum polarization'', as suggested in the comments by @Nihar Karve.

Note that the evaluation of one-loop Feynman diagrams usually leads to divergent expressions, which can be due to zero-mass particles in the cycle of the diagram (infrared divergence) or insufficient falloff of the integrand for high momenta (ultraviolet divergence).

Since you have an electron-position (massive) pair, you will have to deal with an ultraviolet divergence.

Infrared divergences are usually cured by assigning a fictitious small mass to the zero mass particles: you evaluate the corresponding integral associated with the loop and then you take the limit of zero fictitious mass.

I am assuming that you are familiar with quantum mechanics. If not, ignore this answer.

Feynman diagrams are a way to keep track of the various terms in the perturbative expansion. Perturbation theory is not something of quantum field theory only, it belongs to many areas of physics, especially quantum mechanics.

Now you might say: ok, but where are the loops here?

Perturbation theory tells us that in order to compute the contribution of the perturbation $\lambda V$ to the transition amplitude, we should take into account all the states of the theory. Higher order corrections in $\lambda$ result in more and more sums over the states $|n\rangle$.

A loop in a Feynman diagram represents exactly that. We are summing over all the intermediate states which give a non-zero matrix element with $V$ and the external states.

Note: I got the feeling that you were looking for a more ''dynamical'' interpretation, like the photon decays in two electrons which then annihilate into a photon again. Well, this kind of interpretation is unhelpful at best and downright misleading at worst. None of these processes actually take place in any measurable way (photons can't decay!) so it's kind of pointless to pretend that they happen.

Not the answer you're looking for? Browse other questions tagged quantum-field-theory particle-physics quantum-electrodynamics feynman-diagrams virtual-particles or ask your own question.

25
Decay of massless particles
8
Why the photon can't produce electron and positron in space or in vacuum?