Suppose you put your hands on a wall and push it

Suppose you put your hands on a wall and push it. If neither the wall or you accelerate, how could one calculate the force?

That is wrong. The two forces acts on different body.

You do get pushed by the same amount you pushed the wall, but you don't move horizontally because of friction present between ground and your feet.

We can't directly calculate the exact force exterted by you but we can tell by looking that is less than maximum value of static friction, if you are not accelerating.

These two forces are equal in magnitude and opposite in direction. They also form an action reaction pair.

1.For this the best suited is the parallel combination of springs sandwiched between two wood sheets 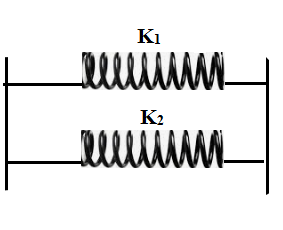 2.So just take that apparatus and put it between your hands and the contact of the wall and just calculate the compression in the springs and using spring force formula. $$\vec{F}= -K\vec{X}$$ where K is the net spring constant. And cheers we are done with calculating force exertedby us on the wall

This situation is known in engineering as a "statically indeterminate system". It literally you cannot determine the forces using a force balance alone. You also need some form of flexibility on the part to decide how load is shared between the contacts.

You can try it yourself, by pushing on the wall, you can shift the pushing from one arm to the other, or you can increase and decrease the force your feet apply (with equal and opposite force through both hands).

If you treat yourself as a rigid body, there is no way to discern all the forces in a statically indeterminate system.

But if you were to model on the bone flexibility, muscle tension and kinematic joint in your body you could estimate the forces given certain (physiological) assumptions.

One thing to keep in mind when doing force problems is that acceleration is net force divided by mass. An object can still be experiencing forces without accelerating, as long as there are other forces. You are pushing on the wall, so that is a force on the wall. The wall is presumably attached to the floor, so the floor will exert a force that opposes your force. There is also a reaction force from the wall to you, and that force is resisted by the friction between you and the floor. Since the floor is exerting a force on you, you are exerting a reaction force on it.

As far as knowing what that magnitude is, there would have to be some empirical measurement.

2
Book against a wall and forces
0
What is the force exerted on a body that doesn't move?
7
Why doesn't a wall move when you push it if there's space behind it?
1
Can force be applied without accelerating?
9
Applying force in zero seconds? How is this possible?
0
The best way to make a push-up (pushup)
0
How can you push the ground backwards?