How to design a collimated (no hot-spot) RGB light source?

I'm an electrical engineer tinkering with a tiny display that has an LED back light. It looks like a little square and it quickly cycles through red, green, blue light to produce the final display. I wanted to do some experiments to improve the brightness so I first researched how to design LED backlights but then I thought maybe I can just make a tiny light projector? And that might be easier to put together on the bench myself. 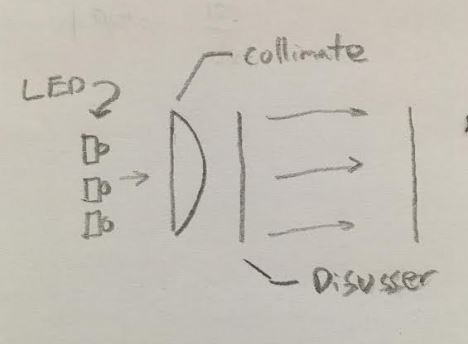 I'm concerned about a few things. The LEDs will be physically close but can't all be at the center of the collimating lens. I don't want any hotpsots just a clean block of light like the original LED backlight which is why I thought of the diffuser. So maybe this is a bad idea? And of course I worry about all the things I don't know :)

Does this approach seem reasonable? Does the LED placement matter as much as I think it might? I'm thinking I can just look up collimating lenses at Edmunds but is there anything special I have to think about for the LED output pattern and lens combo?

Browse other questions tagged optics visible-light light-emitting-diodes or ask your own question.

6
How to determine divergence of a LED source from a single biconvex lens
2
How do you calculate the intensity of light around the focal point from a focused collimated beam of light?
2
How to calculate beam spread of a non-point light source via an aspheric lens
6
What is the best way to collimate light emitted by a LED?
1
simple question about collimating lens
66
What challenges needed to be overcome to create (blue) LEDs?
2
How to improve the visibility of light without increasing the brightness?
1
How to use a magnifying glass or any lens to enhance small light power?
1
True white collimated light / nobody uses this?