Eye Optics/Emmert's law: Where to place scaled copies of an object so they have identical images on the retina?

I read that the center of projection of the human eye is the entrance pupil. So given a light ray which intersects the objects position and the center of the aperture stop, all copies of said object when placed along that line should cover the exact same position/area on the retina (assuming they are scaled according to their distance).

However, doesn't this ignore the effect of accomodation of the human eye: If the original object is quite near, but a scaled copy along the ray is quite distant, the focal length of the lens is changed and thus a different position and area of the retina is covered.

I tried to visualize this by using the ray simulator at https://ricktu288.github.io/ray-optics/simulator/:

Lens focussed on distance of Object A which is projected onto A' on the retina. Object copies B and C are placed at fixed distance either along a ray via the aperture stop (B) or via the center of the lens (C). 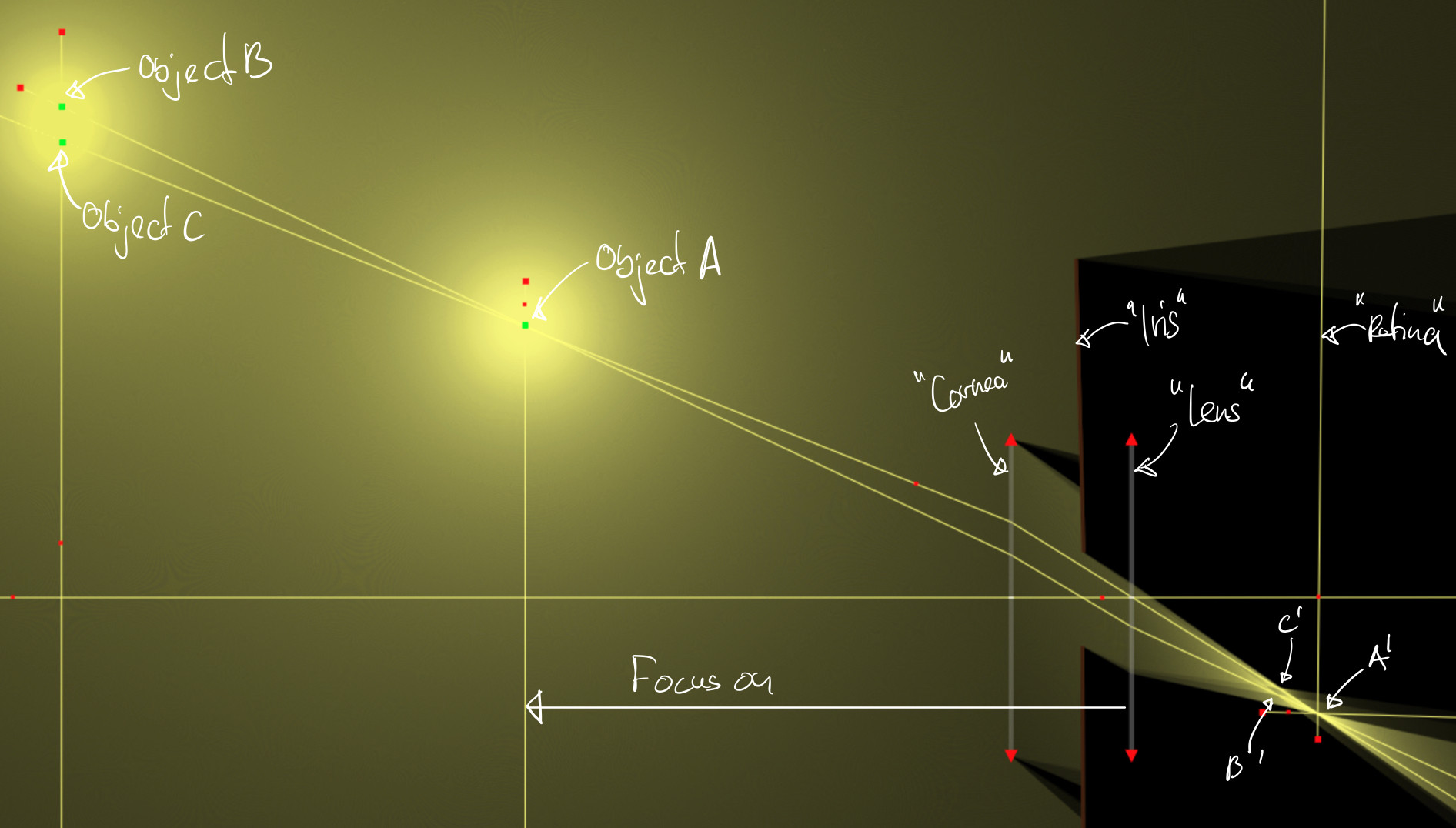 Lens is focussed on distance of Object B/C which are projected onto B* and C* on the retina. Both are in focus (difficult to see in the picture), but B* is further away from A' than C*. Object B would appear larger than Object C. 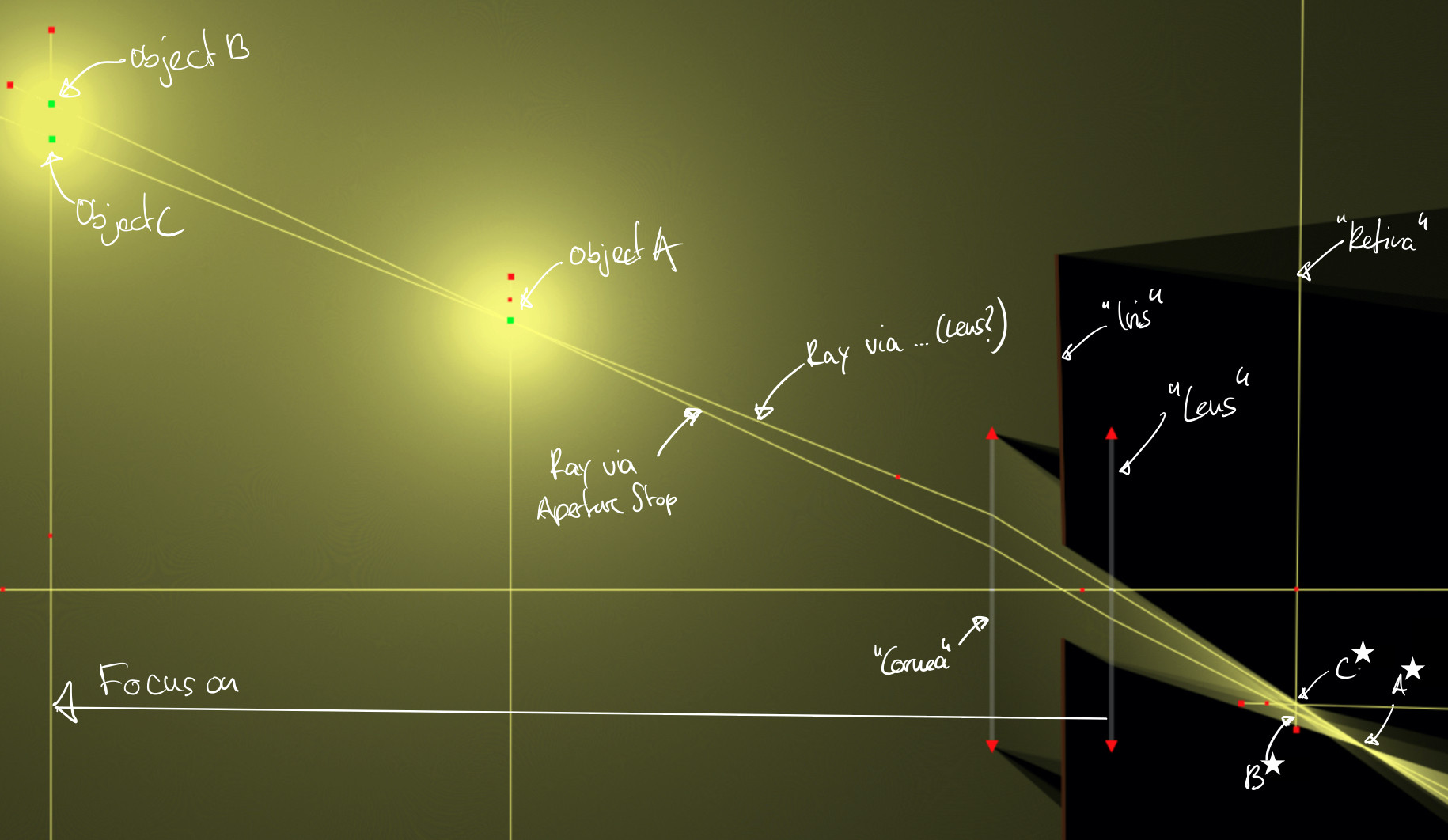 So I guess this boils down to the question:

Given the position P of an object A and a lens system, what is the point Q which creates a ray PQ so that if you focus on any scaled copy of A (A', A'', ...) at different distances along the PQ ray, they will appear at the same position and area on the image created via the lens system.

I am thankful for any pointer to help me understand this!

You are asking nonimaging optics (i think?) question. And you draw diagrams from ordinary optics. Its usually not a good idea.

If you insist on doing it this way you could continue the lines that you use to build an object to intersect the retina. And ignore the actual focus point. Retina doesnt see a object focused behind retina. Retina just intersepts the light out of focus. The difference in position of rays in this case would indicate how blurred an object is, not only it size.

You didnt put points P and Q, I will assume its just object and ray that an eye sees. Items off the lense center can be focused as well as items that are on the central line of lense, so this shouldnt affect situation, even for ordinary optics.

It seems main confusion is that diverging or converging rays are interpreted as seeing a large object, filling this whole interval between the rays. Its only particlly true, blurred object does interact with this whole area, but it doesnt fill it all with itself fully. Other light gets through in that area as well. Object may be small, may have large blur area, and still appear small visually, because your brain compensates for it, telling you that blur is tranpsarent, so the object isnt taking this whole area. In general you need a much better simulation to get answers on this question. Many more rays that will show how images of different objects overlap, making blur.

Best experiment for you will likely be with just 2 points on the same distance. First case they are both in focus. They appear small. Secons case they are out of focus. Their 'image' appear bigger because rays meet retina further apart. And their 'image' overlaps, showing you that none are seen as a solid image, but rather partially transparent. But again, all of this is just a bad approximation, and shouldnt be relied upon.

0
Seeing the image as explained by Geometrical optics?
0
Highly diminished image of an object placed at infinity
0
Does a magnifying glass always make image at least distance of distinct vision?
1
Ray diagram of focussing on a compound microscope
2
Best/Most crafty ways to enhance spectrometer data from a mini-plasma generator?
0
Why does the human eye-lens have a constant magnification for a fixed object distance?
2
Final Image Position with Multiple Lenses
1
Convex lens -view real image with my eye at near point?