Why doesn't the static frictional force between two blocks, placed on top of one another, cancel out the applied force?

The key mistake you made is in the following statement:

As can be seen, $F_1$ compensates for $F_{app}$, at the same time, Newton's third law states that each applied force has an equal and opposite force which acts on the other object. Hence, the static frictional force $F_2$ is applied on the lower block, so I would say that the net force on the above block will become 0N and the lower block will experience a net force of $F_2$

The friction force $F_1$ does not cancel out $F_{applied}$ for a net force of zero on the upper block. Assuming the maximum possible static friction force is not exceeded, both blocks will stick together and have the same acceleration with respect to the ground.

Fig 2 are FBDs for the individual blocks. For each block the equal and opposite friction force that each exerts upon the other per Newton's third law acts as an external force. Since the blocks move together, each block has the same acceleration $a$ as the combined blocks of Fig 1.

Solving the equation for the friction force $f$

From the FBD on the lower block we see that the only external force acting on the block is the friction force of the upper block. Therefore applying Newton's second law to the lower block

The values of the static friction force is the same, as it should be.

But does that mean my sketched situation is physically impossible? So if 𝐹𝑎𝑝𝑝𝑙𝑖𝑒𝑑=𝑓𝑚𝑎𝑥−𝑠𝑡𝑎𝑡𝑖𝑐 I would say that 𝐹𝑋,𝑛𝑒𝑡=0 and 𝐹𝑌,𝑛𝑒𝑡=𝐹𝑚𝑎𝑥−𝑠𝑡𝑎𝑡𝑖𝑐 because of Newton's 3rd law.

The acceleration of the lower block with respect to the ground will be dictated by the kinetic friction force, which is generally considered constant regardless of the applied force. 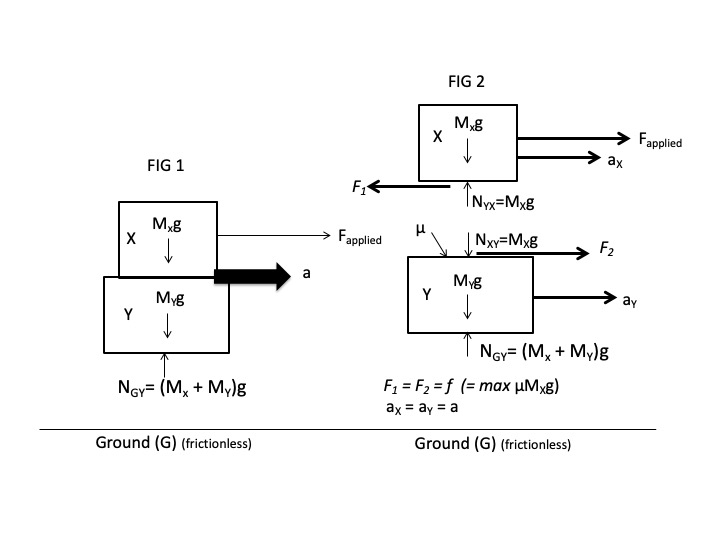 Now the static friction will always be equal in magnitude to the applied force but in the opposite direction, at least to a certain level.

This is where you're running into trouble. There's no particular requirement that the static frictional force be any particular value, so long as it doesn't exceed $\mu_s$ times the normal force. Your assumption is true if the object is at rest; but in this case, the upper block is accelerating, and so the net force on it will not be zero.

A better way to think about static friction problems is to assume that the static friction is less than or equal to its critical value, and then see what constraints this imposes on the situation. If the constraints are violated, then we know that there will be slippage.

In this case, we have from the two free-body diagrams $$ F_\text{app} - F_\text{fr} = m_1 a \qquad \text{ and } \qquad F_\text{fr} = m_2 a, $$ where $m_1$ and $m_2$ are the masses of the top & bottom blocks, respectively. Implicitly, we have assumed that the accelerations of the two blocks are equal. We also know from looking at the vertical forces that the normal force exerted between the two blocks is $m_1 g$, so $F_\text{fr} \leq \mu_s m_1 g$. This inequality lets us (in principle) place bounds on the value of $a$ and/or $F_\text{app}$ if we want the blocks to move without slipping; intuitively, it should make some sense that such bounds exist. But more importantly for your question, you can see that $F_\text{fr} \neq F_\text{app}$ unless $m_1 a = 0$.

You are correct. If your applied force is equal to maximum value of static friction, then lower block will accelerate while the upper block will remain stationary.Thus slipping will occur.

The reason you might feel strange is because in real life the friction between lower block and ground prevent this from happening.

2
Is the newton's second law for a body experiencing a frictional force, relative to the surface in contact?
4
Blocks stacked on an incline connected by rope around pulley
1
Why is the force of Friction less than the force applied on the block in this situation?
1
How does static friction increase with increase in the applied force?
2
Why doesn't the top block's mass affect the acceleration of the bottom block when they're stacked?
2
Two stacked blocks with the upper block pulled with force $F$
9
Why do wheels roll if the force of friction does not depend on surface area?