I read a story regarding the Archimedes' principle in a magazine of popular science and I am thinking of the following question: how does the density of the fluid change the buoyancy force for the same object? As we know, the Archimedes' principle tell that for any object in a fluid, the buoyancy force equals to the weight of the fluid displaced by the object. It is pretty straightforward. Now, if I have an object partially floating on the surface of a liquid, so we have

where $\Delta V$ is the volume of the displaced liquid and $\rho$ is the density of the liquid. So what happen if we place the same object into a denser liquid? Physically or intuitively, since the liquid is denser, it is harder for the object to 'inject' into the liquid, so the buoyancy force should be bigger, so less part of the object submerge into the liquid. But if you look at the math, it seems not like this. Well, now $\rho$ is bigger, but the volume of displaced liquid will be smaller because it is harder to submerge the object into a denser liquid too. So how do we that for denser fluid, the same object will experience bigger buoyancy force instead of being the same?

So my question is from intuition, the same object in the denser liquid should submerse less than the case in less dense liquid. But from the math, it buoyancy force could stay the same or more. So how to prove from the math that our intuition is correct?

For completely submerged bodies the buoyance force, being simply equal to the weight of the displaced fluid, is stronger for a denser fluid.

But you know that the buoyancy force for a partially submerged body (like a sailing boat) must be equal to the weight of the body (unless the boat sinks or starts flying like a balloon).

Since the buoyant force is equal to the weight of the displaced fluid, a (non-sinking) boat displaces always the same mass, no matter which fluid, but more volume of a less dense fluid.

A classical example happens if you submerge an egg in water. It sinks to the bottom of the top. Then start adding salt, until eventually the egg will raise. See for example Tommy's webpage:

A quite different question is if a boat would happily float in a denser fluid like mercury, without turning upside down. The shape of the submerged part is very important for the stability. The buoyancy centre must be higher than the centre of mass, otherwise it will be unstable (that is why ballast is needed in many cases, to make a boat heavier in its underwater part... too much of the boat above water would result in a dangerous high centre of mass)

Since $g$ and the weight of the object $W_{\text{object}}$ are fixed, an increase in density means a decrease in the submerged volume, for the equation to hold.

For an object that doesn't float, the displaced volume needed for it to float is larger than the voulme of the object.

Let an object of volume $V_O$ and average density $\rho_O$ be given. Now, suppose we drop this object in a fluid of density $\rho_F$. Then we have the following claim that I prove below.

The formula $Fb=ΔVρg$ hold whether you submerge an object or not. So for a completely submerged object the buoyant is stronger in dense liquids because $\Delta V$ is the same. If the buoyant force is bigger than the weight of the object, the object floats. It will move upwards until the forces are balanced:$$\Delta V\rho g=mg$$ $$\Delta V=\frac{m}{\rho}$$ Which means that if the object is floating, a higher fluid density means a lower submerged volume. So our intuition is correct.

Here's a picture of metal floating in mercury (a very dense liquid): 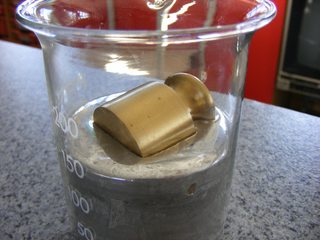 The buoyant force for a floating objects is always equal to its weight. When you increase the density of the liquid the submerged volume decreases.

2
does buoyancy depend on shape and volume?

2
How does one calculate buoyancy with gases?
5
Why is Buoyant Force $V\rho g$?
6
What is the basic reason behind buoyancy?
3
Why is the center of buoyancy located at the center of mass of the displaced fluid volume?
0
Is the buoyancy force independent of the location of the object in the fluid?
0
What is the physical origin of buoyancy?
2
Why is pressure on object in fluid dependent on height of water column above it whereas the *force* on object is not?
0
How does atmospheric pressure affect the buoyancy of a small particle?
1
What is the difference between buoyancy and buoyant force?