Do frequency of electromagnetic waves determine its energy, actually?

In a disturbance in water, the effect of disturbance reduces at distance as the area the wave covers increases decreasing the energy density, ensuring total energy given remains constant. 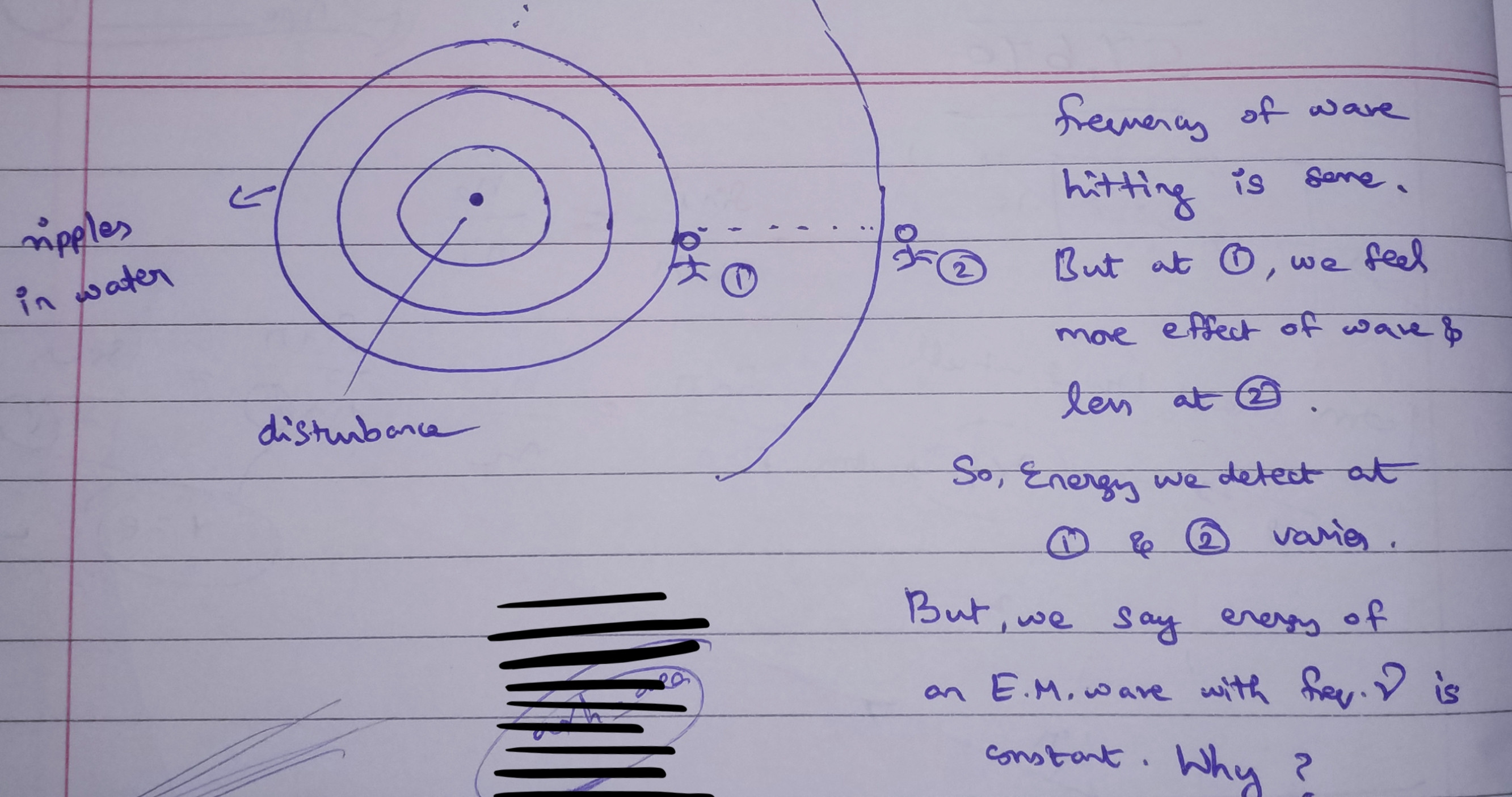 From my discussion, I guessed that high energy electromagnetic waves are detected as low energy ones at distance . But that is not true. So, where my understanding goes wrong?

We have two incompatible ways to think about this.

The radiation spreads, and the energy per unit area decreases with distance. Clearly, charges with bigger acceleration will produce more radiation energy, and to make waves they will oscillate at higher frequency. They will all dissipate at the same rate over time and distance, but with higher frequency they will have more energy, other things equal.

Quantum mechanics throws away the classical ideas. You cannot measure the motion of radiation through space. You can only detect it when it interacts with mass in detectable ways. The mass it interacts with is always quantized, so the measurements are always quantized. When the mass changes state it always absorbs or emits a quantized amount of radiation, so there's no point hypothesizing radiation that is not quantized. A quantum of energy gets emitted from some matter. A quantum gets absorbed by some other matter. Is it the same quantum? Who knows? Who cares? There's no experiment to test that, so it doesn't matter.

How does the quantum of radiation travel through space from the emitter to the absorber? There's no way to test that either. Who knows? Who cares? We might as well suppose that it travels through all possible paths and in some paths its probability function does destructive interference. It doesn't matter how it happens provided that the math predicts the right probability distribution for the detected quanta.

In that context, some quanta are high-energy and some are low-energy. After twice the time, a photon might be passing through an area 4 times as large. So a detector with the same area is 1/4 as likely to detect that photon, even though it will still be a high-energy one if it is detected.

Would it be better to say there's 1/4 the probability of a detection event, and put aside the idea that individual photons are traveling from point A to point B? Yes, that's probably more precise language but what's important is that the math gives the right probability, and not that we think about what it means in exactly the right way.

The answer to your question is a very nice explanation about how the classical EM wave is built up by a ensemble of individual photons. Photons are defined as elementary point particles in the SM.

Now you are saying that the energy of the classical EM wave per unit area decreases as you go away from the source. Why? It is the intensity per unit area, that is the number of photons per unit area that decreases. Why?

To understand this, we need to clarify that the classical notion of trajectory of path does not apply to photons the same way as it applies to classical objects, and photons, as they propagate, are delocalized. But to understand the answer to your question, it is important to clarify that individual photons are emitted in random directions from the point source, and as they propagate, their "paths" will deviate from each other and photons will be farther from each other.

To understand this intuitively, imagine a spike ball. If you put your hand (unit area) on the ball, you can cover a lot of spikes (photons). Now inflate the ball. If you try now to put your hands on the ball, you will see you can cover a lot less spikes. What happened? The same number of spikes (photons) have to be spread over a much larger surface. It is really the spacing between the photons that increased. This is the answer to your question why the energy per unit area of the classical EM wave decreased (as you move away from the source), and it is caused by the decrease per unit area of the individual photons (this QM phenomenon) that beautifully build up the classical EM wave.

Whether electromagnetic waves are gamma rays or radio waves depends on their frequency, not the amplitude. So at very large distances, you have the same frequency, but just a lower amplitude. The energy received per unit time is less, but they are still gamma rays.

In photon terms, each photon still has the same energy, but there is a smaller flux of photons through an area at a greater distance from the source.

The classical EM frequency corresponds to the energy per photon, and the Scottish l amplitude to the number of photons.

The fact the electromagnetic waves of very high frequency behave as gamma rays and at low frequencies as radio waves is essentially a QM phenomenon. The interactions of the wave with what it hits are determined by the energy per photon, i.e. the frequency.

In ground based TeV gamma ray astronomy, telescopes have a collection radius of the order of 100 m, and for a bright source will detect a few gamma rays per minute. That's a few photons per minute in total in roughly $\text{10,000}\,\mathrm{m}^2$ area. Reach one is a very high energy gamma ray, and interacts as such. There are just so few of them that you can count them on your fingers. They absolutely do not behave as radio waves.

where $h$ is Planck’s constant. But the intensity of the wave at a given point (energy per unit area per unit time) depends on the number of photons that pass through a unit area in unit time. The intensity of a spherical wave does decrease with the square of the distance from the source because the number of photons (and the frequency and energy of each photon) are constant but the area covered by a given solid angle increases with the square of the radius.

The "wave energy" will be something like the total energy, summed over all points in space at a given time. This decreases with time due to damping, absorption, etc. The energy density is energy per unit volume and this varies with time and position. And the wave intensity is the energy transfered through a transversal surface in unit time. All these quantities depend on the wave amplitude and other parameters. While the total energy is a global parameter, the energy density and intensity are local. So what you observe with the water waves is a decrease in the intensity as the distance from source increases. You also observe that the amplitude at a given position decreases in time.
The same is true for electromagnetic waves. In terms of quantum picture,the amplitude of the wave is related to the number of photons whereas the frequency of the photons only determines the energy carried by each photon. So it is not the "energy of the wave" that depends on frequency but just the energy of individual photons. As you look at points farther away from the source you "see" fewer photon per unit time (lower intensity) and fewer "photons in unit volume" (lower energy density).

The energy of a photon is $E=hf$. "energy of an electromagnetic wave with a particular frequency is fixed ..." is not a correct statement.

An electromagnetic wave describes the probability of detecting photons and its energy depends on the number of photons it describes. A wave with amplitude $A$ corresponds to an energy of $A^2f^2$ or on average $A^2f/h$ photons.

Not the answer you're looking for? Browse other questions tagged energy electromagnetic-radiation magnetic-fields electric-fields frequency or ask your own question.

6
Electromagnetic waves produced by a charged pith ball
0
How energy of a photon or EM wave has something to do with frequency?
2
Spectral decomposition of radio waves and quantization
1
Amplitude of electromagnetic waves
0
How does light energy increase when passing through the ergo sphere of a black hole?
5
Direct detection of the electric field of an electromagnetic wave from an oscillating dipole