Why is stress defined in the way as it is?

Stress is like pressure and it doesn't matter in which direction the force acts (given it is perpendicular to the surface).

I read in my book that if we have a rope which is being pulled on both sides by a force $F$ , then the stress at any cross section of the rope is defined as $\sigma = \frac{F}{area}$ 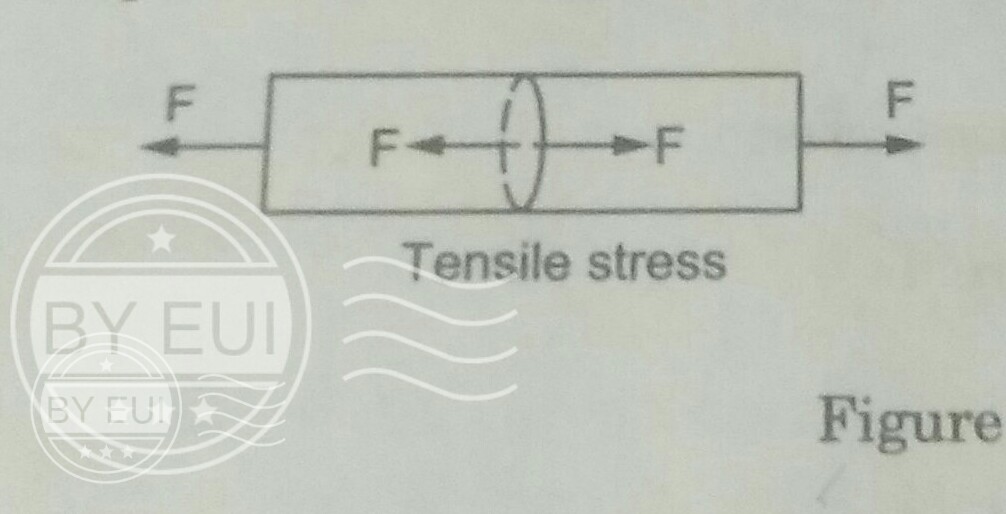 So the stress is due to both the forces.

So shouldn't stress be defined as

Here $|F_{left}|$ and $|F_{right}|$ are the forces applied by molecules on the left and right of the considered cross section on the cross section.

Hope it is clear now.

I think your perplexity is understandable, and it comes from the clash between the notion of stress, which belongs to continuum mechanics, and the molecular description. Let me arrive in a roundabout but hopefully insightful way at why the factor of 2 is unnecessary.

The notion of stress (more precisely: internal pressure) was introduced by Euler around 1753 and then generalized by Cauchy around 1828. Euler's question, summarizing a little, was the following: if I have a body of matter, delimited by some boundary, how can I represent the total force exerted on it by the matter outside of it? His idea was to consider forces that act purely on the boundary (just like when we have something pressing on our skin). The total force on the body of matter could then be found integrating this field of surface forces over the whole surface. His revolutionary idea was that we could imagine to delimit an arbitrary inner portion of a body by an imaginary surface, and consider the forces acting on such surface. Euler considered only forces orthogonal to the surface, and Cauchy generalized them to forces with arbitrary directions – for example tangential to the surface: that's what viscosity is. Cauchy also showed that such a force $\pmb{t}$ could actually be expressed by the action of a linear operator – the stress tensor $\pmb{\tau}$ – on the normal to the surface: $\pmb{t} = \pmb{\tau}\pmb{n}$.

The invention of stress also suggests the best way to think about it, in my opinion. Do not imagine two sides of a surface. Instead, imagine a 3D portion of matter delimited by a closed surface. The stress is just a field of force which that portion of matter "feels" on its surface, caused by external agents. The stress is called "tensile" if the force is directed outwards and pulls on the surface; it's called "compressive" if the force is directed inwards and presses on the surface.

In the case of the rope, imagine a portion of it, even if very short, delimited by two circular surfaces: a short cylinder. You want to know the total force exerted on this 3D portion of rope from the rest of the rope (or anything else outside). The lateral surface has no forces acting on it. Each circular surface does have a force acting on it – the stress – directed outwards with respect to our short piece of rope, which thus feels a pull at its extremities.

In continuum mechanics stress stands in contrast to so-called "body forces" or "volume forces", which instead act on every small volume of a body of matter. Chief example is gravity. Thus body forces $\pmb{f}$ scale like a volume, while stresses $\pmb{t}$ scale like an area. The total force on a body of matter $B$ is then given by the contribution of both: $$\pmb{F}_B = \iiint_{\text{bulk of $B$}} \pmb{f}\ \mathrm{d}V + \iint_{\text{boundary of $B$}} \pmb{t} \ \mathrm{d}A \ .$$ The centre of mass of the body will move as if this total force is applied directly to it. You see from these ideas and equation that there's no need for a factor $2$.

The question of the "two sides" of the surface appears when there is a body of matter $B_2$ adjacent to the first $B_1$, so that they partly share a delimiting surface $S$. By Newton's third law, if $B_2$ is pulling on $B_1$ at the surface $S$, then $B_1$ is pulling $B_2$ at the surface $S$, in the opposite direction. So if you consider the surface $S$ from $B_1$'s perspective, the stress is directed outwards, towards $B_2$. And if you consider the surface $S$ from $B_2$'s perspective, the stress is also directed outwards, towards $B_1$. The situation is no different from when we say that the Earth pulls on the Moon, and the Moon pulls on the Earth with an equal and opposite force. Only, in the case of surface forces this pulling is happening on the same spot. That's what's often confusing. But the two forces are acting on different bodies – keep this in mind.


At a molecular level surface forces don't exist. All forces are body/volume forces. The notion of stress doesn't apply here in its original sense. What we consider as stress on an (imaginary) surface from a macroscopic point of view, turns out to be one of two things, or a combination of both, from a microscopic point of view.

A curious final note. In contrast with molecular or particle dynamics, stress is the only kind of force that appears in general relativity instead, because action at a distance is forbidden there. In fact, when we write the Einstein equations in a "Newtonian" form, split into space and time, the Newtonian stress tensor $\pmb{\tau}$ (and the energy, but no momentum or energy flux) fully appears in the evolution equation for the metric.

There's a beautiful lecture by Truesdell on the history of the concept of stress, which can be very useful for its understanding:

The microscopic interpretation of stress was approached in a rigorous manner I believe first by Irving & Kirkwood at the end of the 1940s, followed by many others. Recent reviews are given by

even if the maths in these may be somewhat advanced, from the text and the equations you can get a glimpse of all sorts of different microscopic stuff that contribute to what we macroscopically call "stress".

For the role of stress in general relativity see for example

Note that if your replaced the two forces $F$ in the middle of your diagram with $2F$ as shown in my Fig 2 below, there would be a net force on each side of the rope from the cut end.

Hope it is clear now.

You can't simply add the magnitudes of the left an right forces divided by the cross sectional area. It is still the equivalent of doubling the forces that actually exist internally.

Anyone who has taken a course in mechanics of materials learns that the normal stress in a member subject to uniaxial loading (as in your figure) equals the load (force F) divided by the cross section area. Not twice the load. 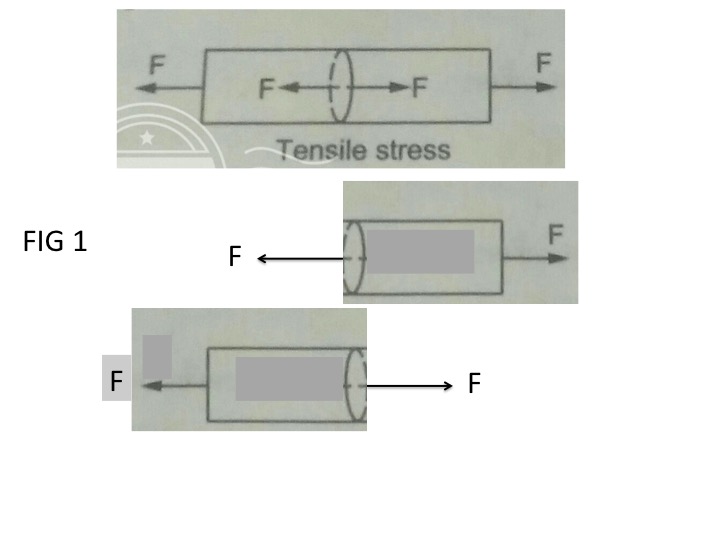 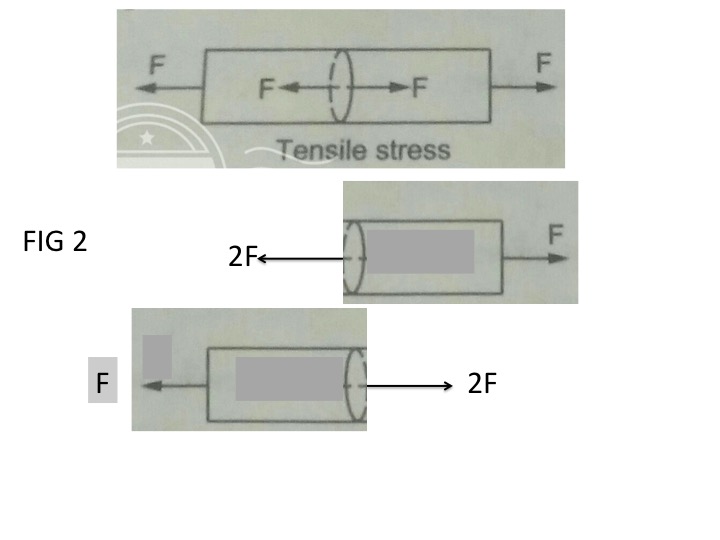 The standard definition is the correct one. You can see that by investigating some different configurations where stress is not constant.

Another way to consider it is a cube sitting on the floor stationary in gravity. The bottom surface of the cube will have a pressure $mg/A$. Pressure and stress are closely related (pressure is the isotropic part of stress) so it makes sense that the stress at the bottom would also be $F/A=mg/A$. Similarly, at the top the pressure is zero as is the stress.

Firstly, by its definition, the restoration force developed per unit area inside the body when subjected to the deforming force is called stress.
Secondly, by Newton's third law of motion every action has an equal and opposite reaction and both act on two different bodies.
Now let's take your rope or whatever body it is in consideration 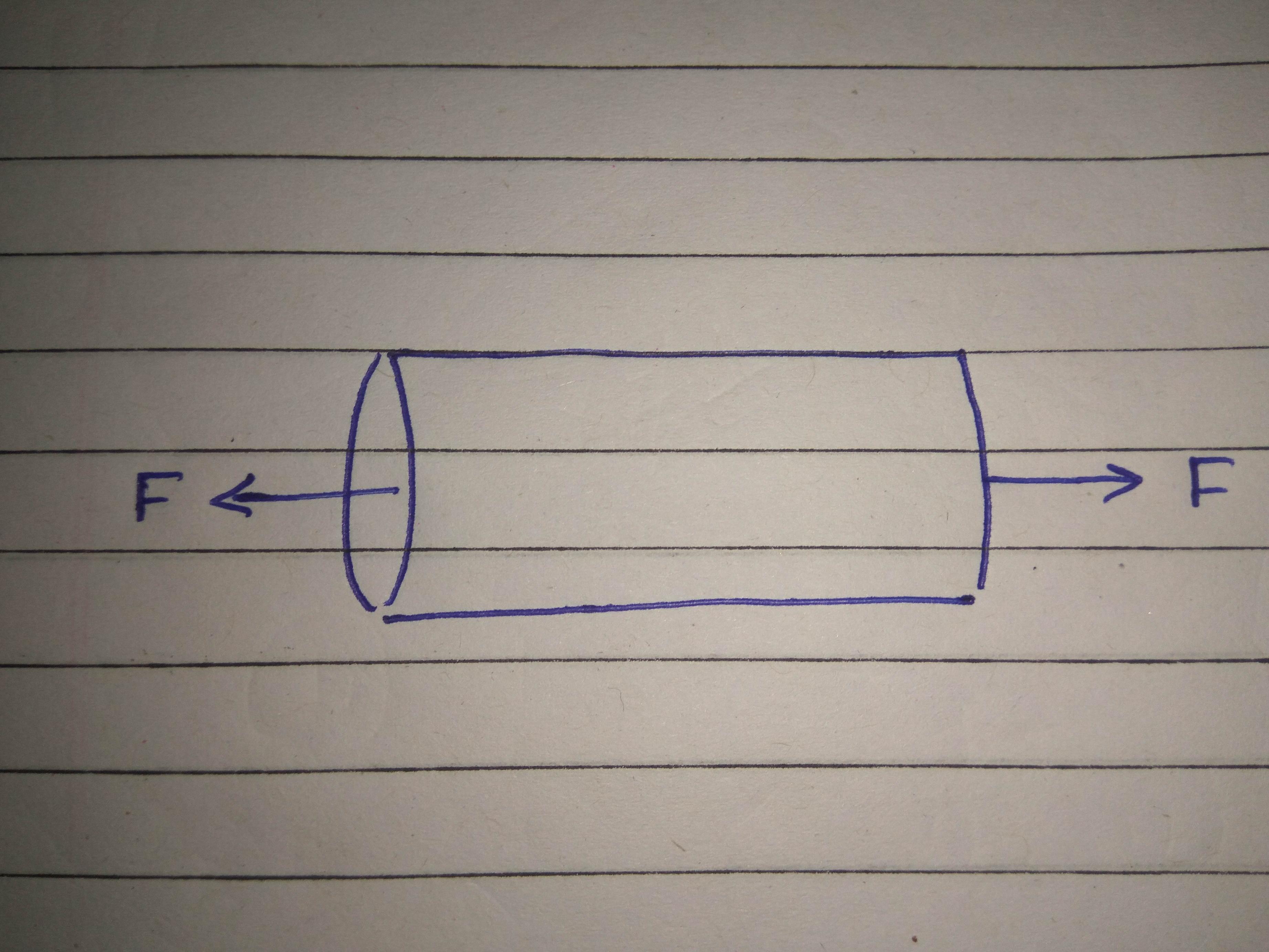 We apply a pair of deforming forces of magnitude F on both ends of the rope, to make sure the body is in rest. Now, 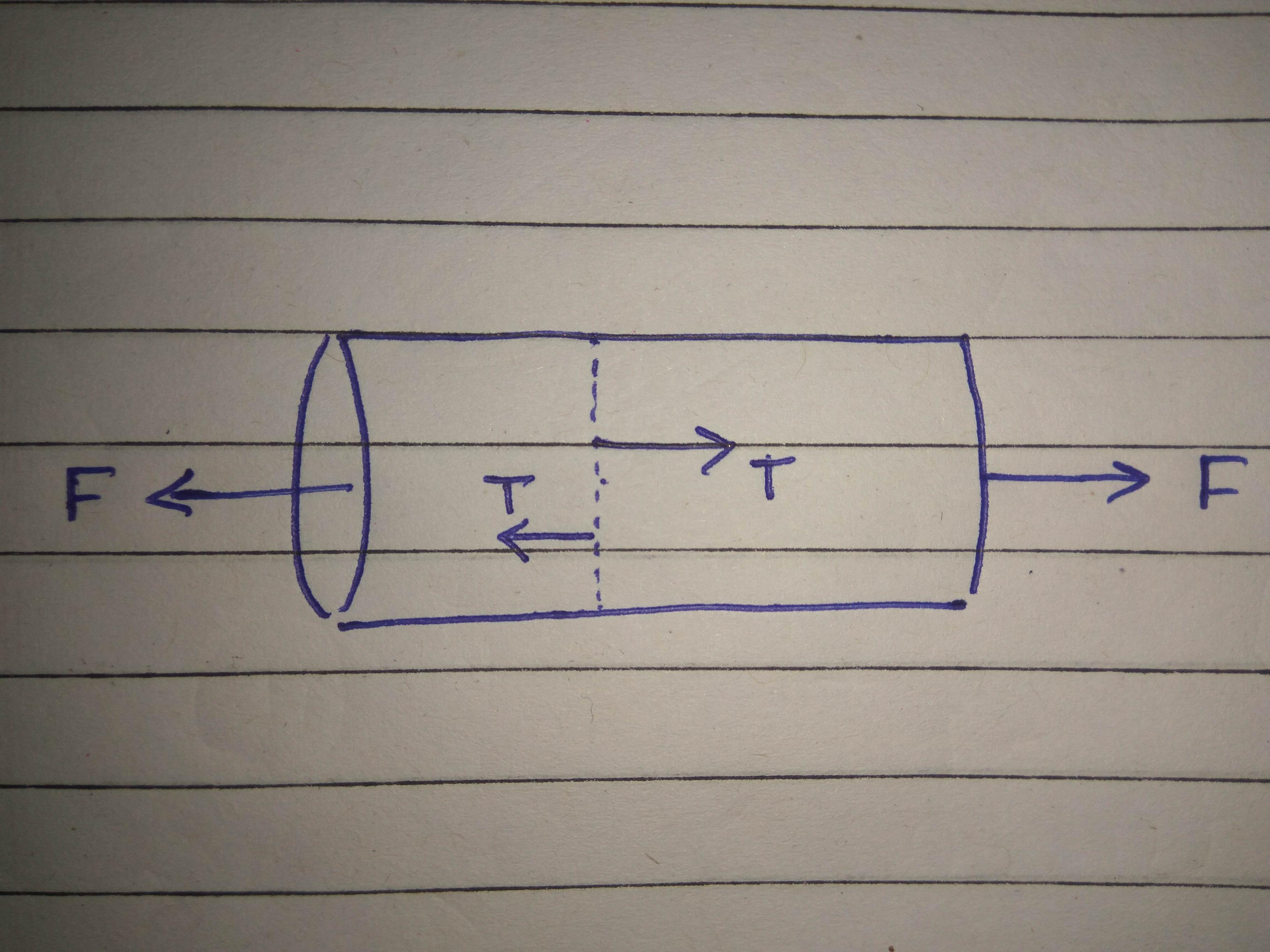 Let's consider a cross-section of the body at a general distance x from left end (sorry, I forgot to show it in the above diagram). There would be some tensile force developed inside the body. If the rope is kept at rest by balanced force F, we can say that T=F.
Now let's consider the equilibrium of any of the parts of the rope. 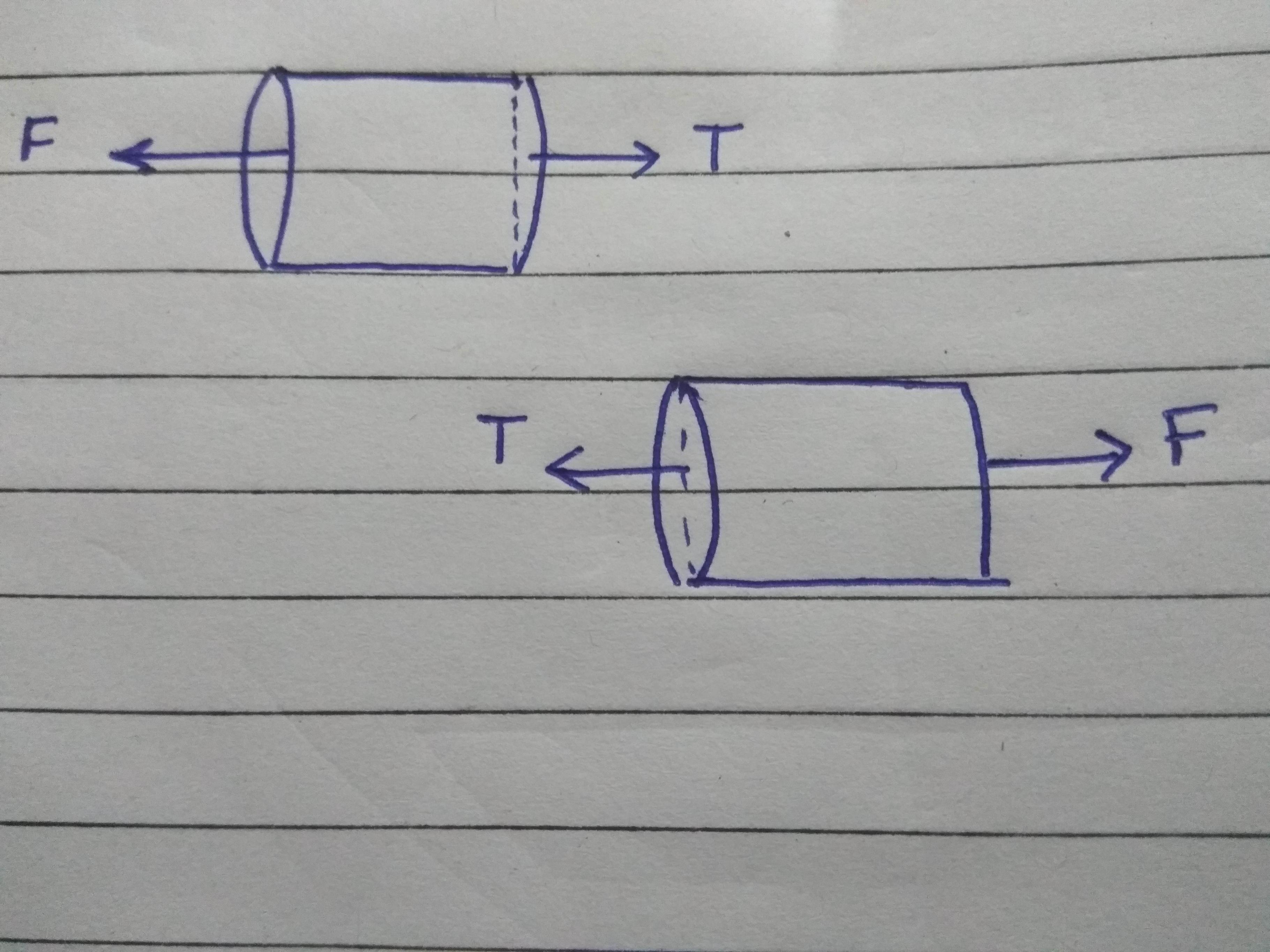 The tensile force will act as a restoring force (because you know, your rope didn't just snap). Also, applying Newton's third law of motion, we can see that development of tensile restoring force in one of the parts would result in in development of tensile force in its anti-parallel direction, which would be present on the other part. (I hope this line has cleared something for you).
Thus, by applying the definition of stress on any of the part we have,
$\sigma=\frac{T}{A}\\ \Rightarrow\sigma=\frac{F}{A}$
Where ofcourse, A= cross-sectional area of the rope.

@SteelCubes Has already given a nice answer, i will only repeat similar explanation just with a different picture. Take a look at the process right about the crack begins :

Molecular Van der Waals forces tries to push crack side A to the left, while same forces tries to push side B - to the right. Thus it can be seen that these conflicting forces acts on different bodies (sides) of a crack. Due to that fact you can't sum them. Forces under summation, must act on the same body. That's why we get $$\sigma = \frac FA$$ As an additional argument- stress has pressure units, so must be defined the same way the pressure is defined. Because otherwise it would not be pressure technically.

Well, if you had a force on one side only, then the whole thing would accelerate in that direction.

Consider this: I step on a scale and it says 160 pounds. So

(PS I'm ignoring the weight of the scale)

Not the answer you're looking for? Browse other questions tagged forces definition elasticity stress-strain or ask your own question.

1
Why don't we consider both the forces while calculating the magnitude of stress in an elastic body?
2
determining the stress of a beam
1
What causes tensile stress to decrease after a material/wire reaches its ultimate tensile stress?
7
Why does stress need to be described with a tensor?
2
Trouble connecting stress and force in continuum mechanics with my concept of force from point mechanics
1
Why is the stress different when different methods are used?
1
Why don't we consider the reduce cross-sectional area while calculating stress in a metallic wire?
0
Stress-Strain Relation in thin layer : Why should divide Force by Thickness?
2
Why does elongation occur
0
Interpreting stress at the ends of a bar