I am trying to wrap my head around some of the implications of relativity. Hopefully somebody can help enlighten me with a specific example I am wondering about:

We have 2 objects, A and B, that are traveling away from each other and emitting light towards each other. We also have a "stationary" object, C, that will be one of our observers stationed between A and B.

I am trying to figure out the perceived behavior of the light from the reference frame of the 3 different objects. I believe A and B will see the same thing so are equivalent, this leaves 2 different reference frames.

Finally, if an object leaves A heading towards B at 0.61c (relative to A), will it ever reach B? From C's perspective I don't think it does (C will see the object approaching at 0.1c, clearly not fast enough to approach B). If not, what speed would an object need to have, relative to A, to reach B? Does whether or not this object appears to reach B depend on your reference frame?

I apologize in advance if this is too many questions at once, or otherwise inappropriate. I have attempted to solve this for myself by searching this site and google but haven't found anything that clicks with me yet. If there is already a question/answer on this sight that could help me better understand this type of thing I would love to learn about it. I would really like to gain an intuitive understanding of how these things work, so analogies and metaphors are appreciated. That said, as an engineer I am not afraid of mathematical explanations, just understand that if I ever studied this stuff it was many decades ago and long forgotten...so baby steps.

The examples use (3/5)c, which is arithmetically convenient.
By the way, the doppler factor is 2.
This makes it easy to draw... and you can do a lot calculations by just counting and doing some simple algebra!

The diagram draws the light-signals emitted periodically by the traveler OPZ.

You can do the same for the other two travelers to analyze your question.

(Note that there are three piecewise-inertial reference frames shown on this one diagram. However, among the observers from O to Z, only OMZ is inertial.)

Of course, you can modify the diagram if you don't want a reunion event Z. Just continue each worldline inertially. 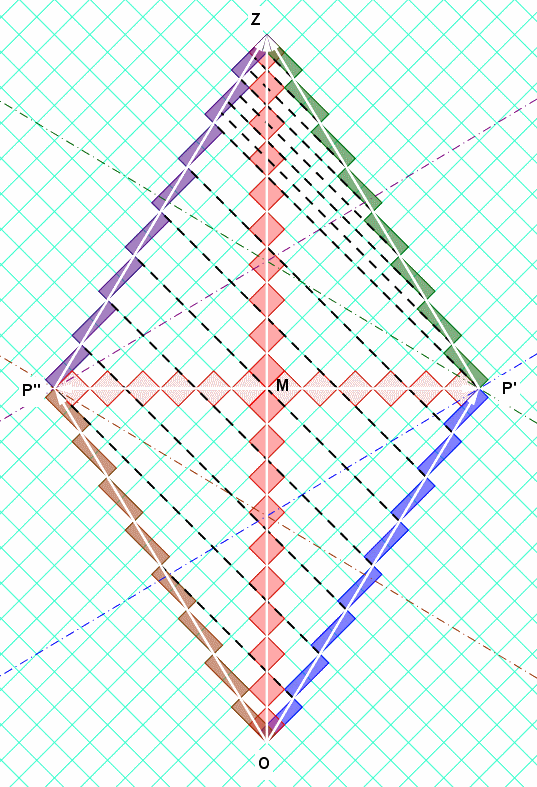 (You can construct the "spacelike ticks" for each observer to measure spatial distances and then velocities from that frame of reference.) 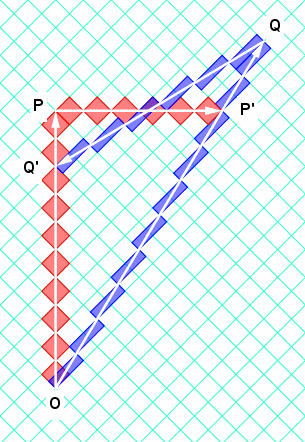 UPDATE: As @WillO addressed in his answer, the velocity-addition formula yields 0.88c. To see this on the spacetime diagram, visit https://physics.stackexchange.com/a/584323/148184

Yes, of course this is right.

I am not confident in these assumptions. Does the time-dilation effect of the relative motion between these objects alter this?

Time dilation is about the comparison between the way things look in one frame and the way they look in another. But you are doing this calculation in a single frame, so time-dilation has nothing to do with it.

As for how things look to $A$: In $A$'s frame, $B$ is moving away at a speed of about $.88c$, well below the speed of light but well above $.61c$ --- so an object sent by $A$ toward $B$ at a speed of $.61c$ (as calculated in $A$'s frame) will never reach $B$. To see where the $.88c$ comes from, there are plenty of good places (including many on this site) to read about the velocity addition formula (that's the phrase to search for) so I won't take up space repeating that here. But I did want to post an answer to address the very specific confusion about the role of time dilation, noted above.

I believe A and B will see the same thing so are equivalent, this leaves 2 different reference frames.

Technically, what A and B see are "symmetric" or "isomorphic", not the same or equivalent. While A and B have the same speed relative to C, the sign is different, and so the velocities are different.

From C's point of view, is there a 0.4c relative motion between A's light and B?

Does the time-dilation effect of the relative motion between these objects alter this?

No. One of the basic postulates of relativity is that all observers measure light as travelling at $c$ in a vacuum. A, B, and C all measure the light from A as travelling at $c$. Time dilation doesn't affect that. And $0.6c$ is the velocity of $B$ as measured by $C$, so we already have the velocity in that reference frame, and don't need to use time dilation to find it. Also, "Lorentz transformation" is more accurate than "time dilation". Measured velocity is affected both by the change in measured time and measured space.

How fast DOES B appear to be moving away from A (in A's point of view)?

You can use the velocity addition formula or a calculator. This gives $0.8824$.

How does this affect A's perception of light from B (or vice versa)?

As I mentioned above, light always travels at $c$.

Finally, if an object leaves A heading towards B at 0.61c (relative to A), will it ever reach B?

From C's perspective I don't think it does (C will see the object approaching at 0.1c, clearly not fast enough to approach B).

If not, what speed would an object need to have, relative to A, to reach B?

It would have to be above the relative velocity of $0.8824c$

Does whether or not this object appears to reach B depend on your reference frame?

I am trying to figure out the perceived behavior of the light from the reference frame of the 3 different objects.

is the root cause of your confusion.

(2) The source of light doesn't matter: "How does this affect A's perception of light from B (or vice versa)?" Light moves at $c$ in all inertia frames, so all the source does is provide an event from which the world-line begins...and that's it. And event is a point in spacetime, it has no speed, hence the motion of the source can't affect how the light moves in any other inertial frames.

Not the answer you're looking for? Browse other questions tagged special-relativity spacetime velocity inertial-frames faster-than-light or ask your own question.

101
How can time dilation be symmetric?
31
(Almost) double light speed
6
What if two twins flew off in opposite directions and were reunited in a perfectly symmetric way, would they have aged same?
0
What time dilation effect would occur when two objects near the speed of light approach each other?