When we apply KVL in a circuit containing R and L elements connected to a battery, we write the voltage (or EMF?) across the inductor as EMF= L di/dt. But, according to Faradays law and Lenz law, we know that the EMF across the inductor is actually induced EMF that opposes the change in flux passing through the winding. EMF=-L di/dt. If so, why are we neglecting the negative sign while writing KVL equations. Also, the sign convention depends on the rate of change of current passing through the coil. So, we are supposed to form KVL equation according to the given circuit right? If I can consider an inductor as a battery, I am facing dilemma when I cross check it with Lenz law. I would like to know the where I am stuck.

But, according to Faradays law and Lenz law, we know that the EMF across the inductor is actually induced EMF that opposes the change in flux passing through the winding. EMF=-L di/dt. If so, why are we neglecting the negative sign while writing KVL equations.

The negative sign in Faraday's law comes from the fact that the voltage across the inductor is an induced emf that acts to oppose any change in the magnetic flux and current, as opposed to a drop in potential due to current flow as in the case of a resistor. As will be illustrated below, there is no conflict with KVL. First, the basic equations:

Figures 1-3 below show a series RL circuit, battery and a switch. They demonstrate the case where an emf is induced in an inductor that opposes an increase in current through the inductor while satisfying KVL

Fig 1 begins with the switch open and no current flowing in the circuit. All of the battery voltage appears across the switch, satisfying KVL.

As time progresses the voltage across the inductor decreases, and the current and voltage drop across the resistor increases.

And also, how will the equation be in the case when the current through the inductor is decreased suddenly ? I also have a doubt regarding how the current is made to decrease suddenly. Kindly clarify.

Any attempt to suddenly reduce the current will result in an Emf the polarity of which will be to oppose a sudden decrease in current. To illustrate, see Figures 4 and 5 below.

From this explanation, I feel that in figure 2, when the switch is closed at t=0, it is equivalent to connecting a battery of same EMF but the positive is connected to positive and negative to negative so there would not be any potential difference between them and zero current at that instant.

That would be correct, but only for the instant after closing the switch.

Whereas when the switch is opened after a long time, as in figure 5, the induced EMF across the inductor has polarity similar to a battery in a circuit where current flows from negative to positive terminal inside the battery. Correct me if I am wrong.

Essentially yes, but because conventional current is defined as the flow of positive charge (an unfortunate historical decision), the current flow is from the positive terminal of the battery to the negative terminal through the resistor $R_{2}$.

In the figure 5, isn't 𝑉𝐿=L di/dt ? And the KVL equation for L-𝑅2 loop is -𝑉𝐿+I𝑅2=0 when the current is taken in clock wise direction

In the clockwise direction, yes. But as I said before, conventional current is the flow of positive (not negative) charge. So the direction of the current would counterclockwise in Fig 5 as shown. But it really doesn't matter. KVL then simply becomes $+V_{L}-IR_{2}=0$. Either way, $V_{L}=IR_2$ and the solution to the differential equation for the transient condition is the same. 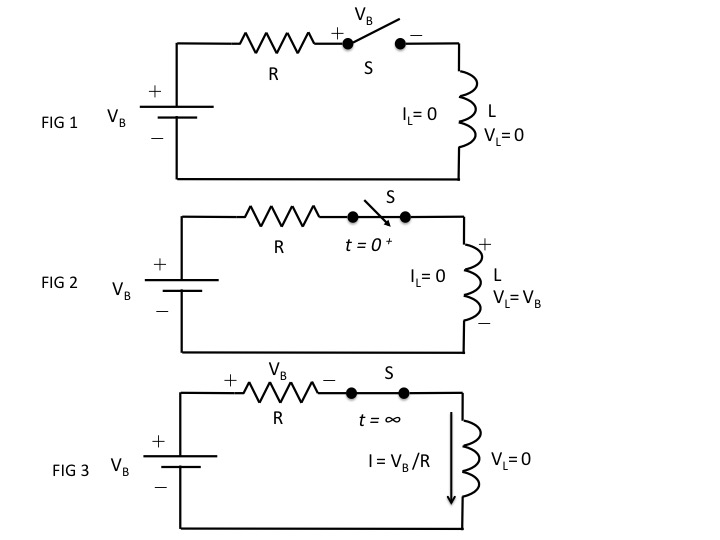 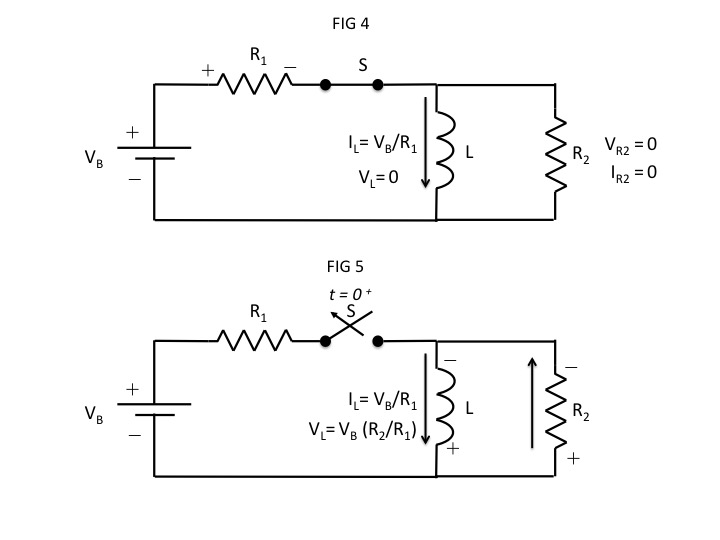 we write the voltage (or EMF?) across the inductor as EMF= L di/dt. But, according to Faradays law and Lenz law, we know that the EMF across the inductor is actually induced EMF that opposes the change in flux passing through the winding. EMF=-L di/dt. If so, why are we neglecting the negative sign while writing KVL equations.

This is often poorly understood aspect of circuit theory. In that context, induced EMF in inductor is not the same concept as voltage, at least not in the standard sense "drop of potential" which we can measure with voltmeter or oscilloscope and which is used in the modern formulation of KVL.

Faraday's law gives us formula for induced EMF in any inductor (ideal or real): $$ \mathscr{E}_i = -L\frac{dI}{dt} $$ where the minus sign is there because induced EMF is always opposed to change in current. So if $I$ increases, induced EMF is negative (with effect to slow down the increase).

Now, in Kirchhoff's voltage law, we need to express all voltages, i.e. potential drops in the designated positive direction of circulation, for all elements in a circuit.

Finding and expressing voltage on inductor is not trivial. For ideal inductor, we are lucky because due to lack of ohmic resistance, net force acting on current in the coils has to be always effectively zero (no resistance to push against) so we know potential drop has to exactly cancel the induced EMF. So we have potential drop in the positive direction

For real inductors with substantial ohmic resistance, this relation is invalid, because then in the coils of the inductor, current experiences also force of ohmic resistance. The generalized Ohm law implies that current in a piece of wire is proportional to total electromotive force in that piece of wire (including all forces - induced, conservative, non-electromagnetic etc.). So in a winding of an inductor, we have two electromotive forces: 1) induced electromotive force as described above 2) potential drop, due to electrostatic field of charges nearby (mostly on surfaces of the conductors in the circuit). So we can express this relation as $$ \mathscr{E}_{total} = RI $$ $$ \mathscr{E}_i + p.d. = RI $$ so we can express potential drop $$ p.d. = RI - \mathscr{E}_i = RI + L\frac{dI}{dt}. $$

So you can see here that potential drop across real inductor has different magnitude than induced EMF (except when current is zero).

Not the answer you're looking for? Browse other questions tagged electromagnetism electric-circuits voltage electromagnetic-induction inductance or ask your own question.

2
Circuit Loop Law Doubt
0
What happens when an inductor is charging from a battery?
2
At $t=0$ the voltage across the Inductor will immediately jump to battery voltage. Why?
1
From where does an inductor pull charges?
5
Can Kirchhoff's Voltage Law be applied here?
0
Transient state analysis of RL circuit
6
Confusion in understanding the behavior of inductor in RL circuit with DC source
1
How is the rate of current change in an inductor present in a circuit maintained / decreased?