Many times I see questions like this or this, trying to understand torque or angular momentum from the 3 Newton's laws. There is also this question where there is a good discussion about the subject, while more focused on spin and quantum mechanics.

But talking about classical mechanics, the 3 laws (with the addition of gravitation) are normally presented as the foundation from which all mechanics follows as a consequence.

In my opinion, 3 additional laws are necessary:

If we make an analogy with linear algebra, that 6 laws (7 with gravity) form a "basis of linearly independent vectors" for classical mechanics.

But I don't remember of having ever seen that statement clearly presented. Only because linear momentum is used to define angular momentum, it doesn't mean that the conservation properties of the later is a corollary of the first.

You are almost correct.

Also, transform the angular momentum to point A with

So (4) is the general law relating the net torque about an arbitrary point, to the rate of change of angular momentum about the same point. The 2nd term vanishes only when point A is not moving or is co-moving with the center of mass, or if the body is purely rotating about the center of mass (zero momentum), or rotating about A. Under all those conditions the above becomes the equation you stated $ \vec{\tau}_A = \tfrac{\rm d}{{\rm d}t} \vec{L}_A $.

A final note about 3. See this answer on the exchange of torque between two contacting gears. The reason item #3 you stated is incorrect is because contacts happen as forces along specific lines (the contact normal) and not only the magnitude and direction of momentum is preserved (as a momentum impulse is exchanged between bodies along the normal), but also the location of the contact normal in space. Hence the torque of the impulse (commonly known as angular momentum) is preserved also.

Noether's theorem relates the conservation laws to the symmetries of space. More specifically:

The caveat is that these arguments are made within the context of classical mechanics, where these symmetries are fundamental, while the equations of motion follow. Newtonian mechanics studied in school and early university courses takes a different approach: it postulates the three Newton's laws, which allow to derive the rest. In other words, the additional laws formulated in the question are not necessary. In addition, they seem to be based on a narrow interpretation of Newton's laws, as applying only to linear forces and momentum - which is probably an impression given by a particular textbook.

Let me also not that the formulation of the first law given here (and in many textbooks) is inadequate - it makes it look as a particular case of the second law (for zero acceleration). What the first law really says is that there are such reference frames, where a body, acted upon by a net zero force, will move with a constant velocity. In other words, it postulates the existence of inertial reference frames, in which the second and the third law apply. The formulation given in most textbooks is mathematically equivalent, but switches the cause and the consequence.

You are right that additional laws are necessary. This is because, as you point out, from the perspective of Noether's theorem, rotational symmetry is something that is distinct and irreducible in its own right to translational symmetry. A simple counterexample to the reducibility of rotational symmetry is "taxicab geometry", which is a space in which instead of the distance formula being

where $P = (P_x, P_y)$ and $Q = (Q_x, Q_y)$ are whatever two points we want to consider. The latter has only a finite rotational symmetry group, but its translational symmetry is as good as Euclidean geometry.

However, three laws are not required, though it is definitely more intuitive and natural-feeling to start with such a presentation. One extra law is sufficient:

That is to say, if $\mathbf{F}_{12}$ is the force that body 1 exerts on body 2, that, using the cross product to check parallelism,

which you can see is literally the statement that there is no torque ($\mathbf{r} \times \mathbf{F})$ in the system resulting from the two bodies alone, i.e. there are no self-torquing systems. (You don't need a corresponding statement for $\mathbf{F}_{21}$ because Newton's third law already constraints that from $\mathbf{F}_{12}$).

The following diagram expresses Newton's first law, and it also expresses an area law. Newton used that area law for his derivation of Kepler's law of areas from first principles. 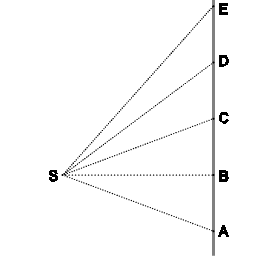 In the absence of any net force an object will move along a straight line (ABCDE), covering equal distances in equal intervals of time.

Also, with respect to point 'S' the object sweeps out equal areas in equal intervals of time.


In terms of newtonian mechanics angular momentum cannot be defined in the absence of any force. The absolute minimum configuration is two point masses that exert a force upon each other, thus each causing change of motion of the other. Then we can pinpoint a single point that we know to be an unaccelerated point: the Common Center of Mass of the two point masses. Generalizing: for angular momentum the common center of mass of all the participating masses is the reference of motion. Only the angular momentum with respect to the common center of mass is consistent.

(Beyond the scope of newtonian mechanics: it may be that a theory of motion is possible in which translational/rotational duality is complete. I don't know.)

As far as newtonian dynamics is concerned: I prefer to think in terms of some form of duality of linear and angular mechanics, so that the two are not independent.

Also, I concur with the statement by contributor Vadim about Newton's first law. I concur that in its historical form the first law is redundant.

With the benefit of hindsight we know that in any theory of motion (Newtonian, SR, GR) the first thing to assert must concern the geometric properties of the arena in which physics is taking place.

Reversing the historical sequence of theories:

GR: the metric of spacetime is described by a solution of the Einstein Field Equations

SR: the metric of spacetime is the Minkowski metric

Newtonian: space has the same symmetries as Euclidean geometry.

In the Principia we see that Newton immediately asserts that it is valid to do vector addition (back then it wasn't called 'vector addition' yet, but it is what Newton was doing/applying.) That is, in order to formulate newtonian mechanics it must be granted that Euclidean geometry is a valid model for the geometric properties of physical space.

In terms of Euclidean geometry symmetry under rotation is implicit.

Not the answer you're looking for? Browse other questions tagged newtonian-mechanics angular-momentum rotational-dynamics torque or ask your own question.

107
Is Angular Momentum truly fundamental?
9
Intrinsic angular momentum in classical mechanics
3
Converting angular velocity to linear velocity through friction
1
Conservation of linear momentum magnitude along a trajectory
38
Apparent Violation of Newton's $3^{\text{rd}}$ Law and the Conservation of Momentum (and Angular Momentum) For a Pair of Charged Particles
0
Generalization of torque and angular momentum
0
How was the torque-force relationship discovered
40
Is torque as fundamental a concept as force?
0
Small Question on Angular Momentum