Rescaling/renormalisation of the $n$-point function in $\phi^4$-theory by an unique $Z$?

In the chapter 12.2 of Peskin & Schroeder they introduce the rescaled renormalised $n$-point function respectively Green's function:

On first sight it seems to quite plausible in view of the rescaling of the fields $\phi(x)$ according to (10.15), but in the meantime I have a doubt. Let's consider the following 3-order diagram (a) (and its possible counter term (b)): 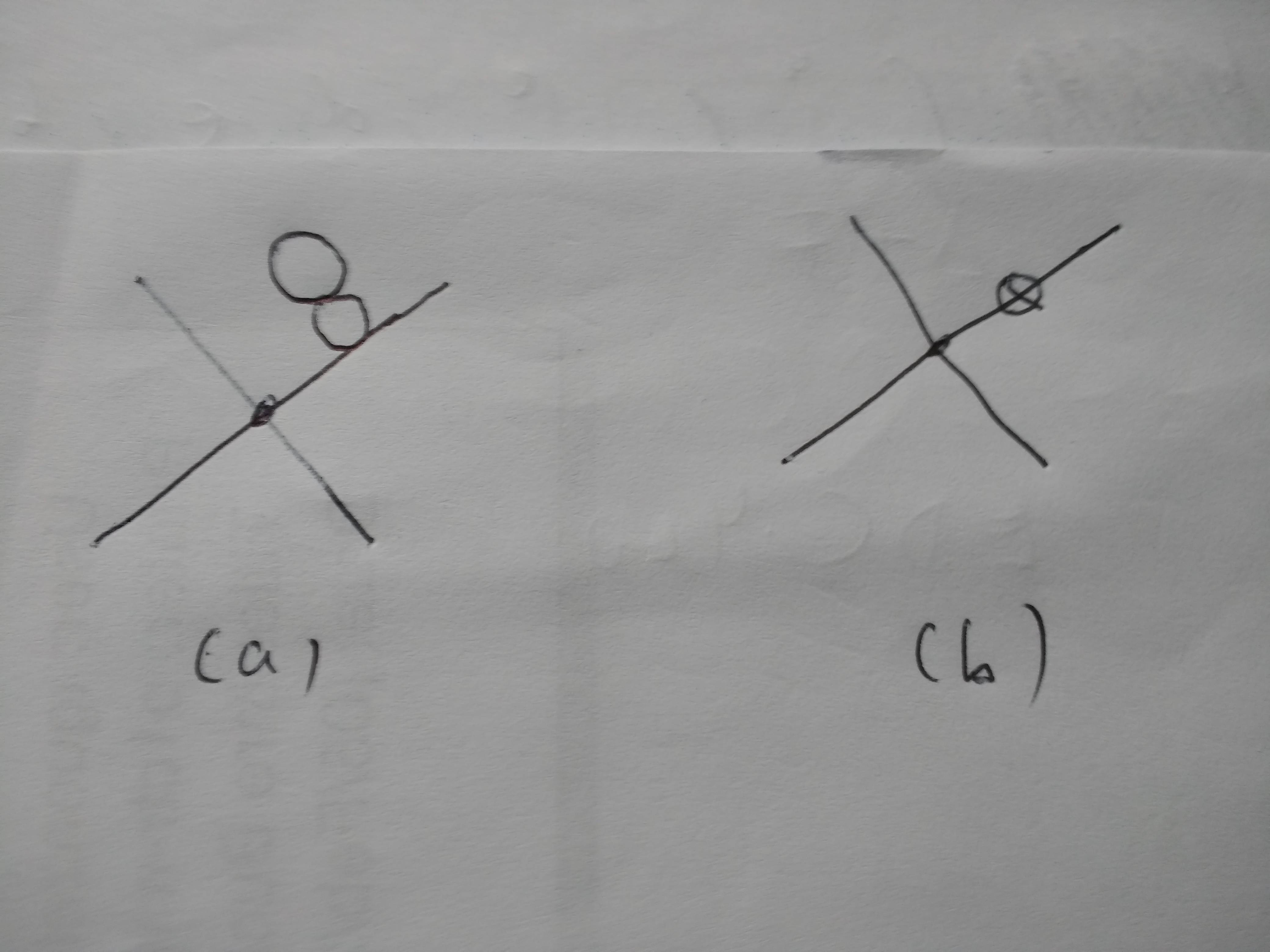 chosen since field renormalisation does not occur on 2nd order. Apart from this "cactus"-diagram (in order to generate a residual $\neq 1$ it should be actually be the "sunset"-diagram according to kaylimekay) there are other loop insertions possible in third order (and further loops I won't consider in the amputated part of diagrams of third order), because this particular example is enough to present the problem. Furthermore, in the computation of the $S$-matrix the permutations of the loop insertion on the remaining 3 external legs would have to be considered, but this does neither change the question.

The computation of such the "cactus" (sunset) insertion would generate a residuum non-equal to 1 of the mass pole. In order to get rid of it, I would have to rescale the field. However, I would only need a rescaling on one leg, not on the other legs. So it seems to turn out that only one $Z^{1/2} \neq 1$, whereas the other $Z^{1/2}$'s stay equal to 1. This is strange. Is this possible?

The formalism of the rescaling factors suggests that there is only one $Z$, not several ones. I can imagine that the n-point function represents a whole series of Feynman-diagrams, also one diagram where on all 4 external legs there is a 2-loop "cactus" (sunset) insertion --- so such a diagram would be equilibrated and would nicely fit in the treatment of external leg insertion given by the LSZ, but this diagram would be of $9^{th}$ order (and I'd have to deal all the orders lower (including 3) than 9 too), so what do I do if I want to stop the computation at third order?

Another curiosity of similar type already occurs at lower order, namely in the mass renormalisation. If the divergence of the loop insertion in just one external leg is absorbed in the Lagrange-mass parameter, this absorption would take place on just one external leg, whereas the mass of the other 3 external legs is not touched. How is such a thing possible?

EDIT: After further reading on the topic I got the impression that the diagram with one loop on one external leg is not "usually" treated, i.e. instead it seems to be replaced by a Dyson-resummed propagator. How can this be justified ? One of the rules of perturbation theory is that the computations should be done order by order, i.e. sticking to a particular order. However, by using a Dyson-resummed propagator many (if not all) orders are used in all external legs which seems to break this rule. And above all how can the discussed diagram fit in such a procedure ? Will it be disregarded and if yes why ?

However, I would only need a rescaling on one leg, not on the other legs. So it seems to turn out that only one 𝑍1/2≠1, whereas the other 𝑍1/2's stay equal to 1. This is strange. Is this possible?

The final answer to a given order in perturbation theory involves summing over all Feynman diagrams to that order. Any individual term in this expansion is not particularly meaningful by itself. The sum will involve terms with cactus loops appearing on each external leg (after all the particles are indistinguishable). In the end you will need to apply one waveform function renormalization $Z$ to the field, and not to individual legs in a Feynman diagram.

A systematic way to keep track of this is to use the quantum effective action, which leads you to consider only "1 particle irredudcible" (1PI) diagrams. In other words, you should only consider diagrams where the diagram is still connected after cutting one leg in the diagram, which is a property not satisifed by the diagram you drew. It is not that the diagram you drew is incorrect, but that it can be built up out of more basic, 1PI piece. If you first show you can renormalize the 1PI diagrams, then you are guaranteed to be able to renormalize the more complex diagrams like the one you drew down.

this diagram would be of 9𝑡ℎ order (and I'd have to deal all the orders lower (including 3) than 9 too), so what do I do if I want to stop the computation at third order?

You should draw all diagrams to the order you want to compute the answer, but you should not include any diagrams at higher order.

However, note that it is common to rearrange the perturbative expansion to be in numbers of loops (powers of $\hbar$), rather than in powers of the coupling. In which case, your diagram is a "2 loop" diagram -- you are including 2 loop corrections to the 1PI propagator. You want to include 1 and 2 loop corrections to all propagators and vertex functions.

Now, suppose that, as is usually the case, I am only capable of computing perturbative results. This means that, rather than the exact form of $Z(\lambda)$, I will have instead the expansion in $\lambda$ $$Z(\lambda) = 1 + \lambda Z_1 + \lambda^2 Z_2 + \dots$$ up to whatever order I am capable of calculating. Now, when I put this perturbative expansion of $Z$ into the exact expression (12.35), I obtain a factor $$ Z^{n/2}(\lambda) = (1 + \lambda Z_1 + \dots)^{n/2} = 1 + n\frac{\lambda Z_1}{2}+\dots$$ Notice what has happened in the second term here. This relates to the first perturbative contribution to the field strength $Z_1$. It would correspond to a 1-loop correction to the propagator. (I know $\phi^4$ doesn't have a 1-loop correction, but in general theories there is a 1-loop correction, so let's just consider the general case.) Now the key observation: it comes with a factor of $n$. That is, there is the same correction for each of the $n$ external legs.

Let's elaborate on this just a little for clarity. When working only to $O(\lambda^1)$ I can only add one more loop to the tree-level diagram. Regarding the external legs, then, the most I can do is add one loop to one of them. Anything more would be higher order in $\lambda$. But there are $n$ legs, and none of them are special, so they should each get an opportunity to have that one loop correction on them. Keep in mind that when there are multiple diagrams for the same process, they sum together. So each diagram with the one loop correction on a leg is a separate diagram, each leg gets a chance, and there are $n$ legs, so you have $n$ diagrams with the same value summing up, thus giving the factor of $n$.

In summary, it is not the case that the $Z^{1/2}$ are different on each leg. They are all the same. But when you can only calculate perturbatively, the expansion of $Z^{1/2}$ raised to the power $n$ has the structure of attaching fixed numbers of fixed order loop corrections to various legs, and summing over all ways of doing this. This summing means the result is still symmetric among the various legs. All legs get an equal opportunity to have any loop correction. This is the correct way to get a perturbative result. It would not be correct to say "Well, I have a 1-loop contribution to $Z$, and I have to put this 1-loop correction on every leg simultaneously" because this would actually come in as an $O(\lambda^n)$ correction, as you point out in your post. If you did this, you would have missed the lower order $O(\lambda^1)$ to $O(\lambda^{n-1})$ corrections that should have come in first.

Appendix to address the resumming of the propagator

As explained in Peskin or other textbooks, if the one-particle irreducible corrections to the propagator are denoted as $-iM(p^2)$ then these corrections can be summed as a geometric series to give $$\frac{i}{p^2-m_0^2-M^2(p^2)}$$ where $m_0$ is the bare mass parameter. Now, as you point out correctly, this contains contributions at all orders in $\lambda$ even if you only included the $O(\lambda^1)$ 1-loop piece of $M^2$. However, this does not mean that the $O(\lambda^2)$ term in the expansion of the above expression is fully correct. It will represent a propagator with two copies of the 1-loop correction inserted. But it will not include the propagator with a single insertion of the intrinsically 2-loop correction, which is also $O(\lambda^2)$. So while summing finite loop results to obtain an all-orders expression is often a valuable thing to do, it is not the same as obtaining the true all-orders result, and will still only be fully accurate up to the original order at which you calculated (see trivial example below).

The expression (12.35) that you are originally interested in is a correlation function, and to pass from there to a S-matrix element via the LSZ theorem, one "amputates" the external propagators, that is, you discard that resummed propagator anyway, and keep only the residue of the pole, which we denote as $Z$. We can find the residue by expanding the resummed propagator around the pole at the physical mass $p^2=m^2$. Like any Taylor expansion, that will involve the derivative of the function, that is, it will involve the derivative of $M^2(p^2)$, see for example, expressions like (7.26) in Peskin. So we see that the $Z$ is directly related to the one-particle irreducible corrections to the propagator. If you've calculated those up to order $\lambda^k$, then you will know $Z$ also up to, but not beyond, order $\lambda^k$. So you see that the resumming of the propagator into an all-orders expression did not actually get you anything "that you didn't deserve," so to speak. Then from this perturbative expression for $Z$, you can follow my argument above.

The resummed propagator has the schematic form $$D(\lambda)=\frac{1}{1-f(\lambda)}$$ where I am indicating the dependence on the coupling but suppressing the argument for the momentum. This can be expanded in a geometric series $$D(\lambda)=\sum_{j=0}^\infty f^j(\lambda) = 1+f(\lambda)+f^2(\lambda)+\dots .$$ Because the sum runs up to infinity, this expression does contain pieces of all orders in $\lambda$. However, if I don't know the exact form of $f(\lambda)$, it still won't be fully correct above the order up to which I know $f(\lambda)$.

Not the answer you're looking for? Browse other questions tagged quantum-field-theory renormalization correlation-functions s-matrix-theory or ask your own question.

2
How to qualitatively imagine vacuum polarization by a photon?

4
Symmetry factor for Feynman diagrams in $\phi^4$-theory for $n$-points Green function
4
S-matrix element
2
Renormalization of phi cubed theory
2
$\phi\phi\to\phi\phi$ scattering in $\phi^4$-theory and Feynman diagrams at the tree-level
5
Symmetry factor in $\phi^4$ theory
0
Understanding Feynman Diagrams for the 2-point correlation function and $\phi^3$
2
Can one disregard tadpole diagrams even if an operator is being inserted?