Why did I measure the magnetic field to vary exponentially with distance?

In my physics lab class, we were allowed to come up with our own research question and then try to answer it. My question was whether permanent magnets (i.e., things like refrigerator magnets) would also have the characteristic that B decays with 1/distance as we see for the B created by current in a straight wire.

To answer this, I measured the magnetic field using a magnetometer at various distances from the magnet and then plotted 1/R vs. B in a linear fit, and B vs. R in a semi-log and log-log fit. For all the fridge magnets studied, the chi-square value of the best fit line in the semi-log plot was much closer to 1 than in the other fits and the residuals were all near zero, indicating that the semi-log was the best fit (and not only the best fit, but a very good fit over all) and the relationship between B and R was best modeled by an equation of the form B = Ae-CR. Why is this?

Why would permanent magnets have an exponential relationship with R? I don't need to know the answer to this question for my project. I just need to present the data, but I wondered if anybody knows why this might be.

It was a "one-sided" fridge magnet.

is a key piece of information.

Your magnet is not a single dipole bar magnet; instead, it is a Halbach array, i.e., a carefully-engineered arrangement of individual dipole magnets which has been optimized to have a strong magnetic field near the magnet which becomes weak as you go away from it. This is normally achieved by having rapid switches in polarity, which channels the magnetic flux from one of the magnets of the array into its neighbours. 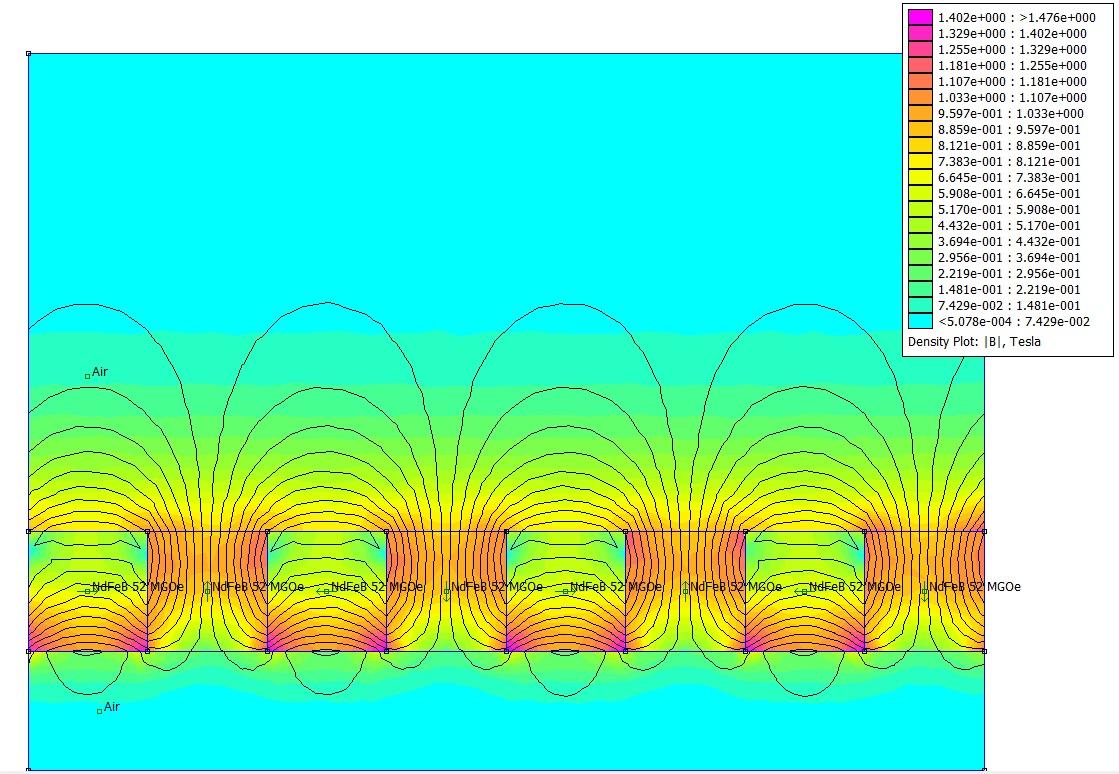 In pictorial terms, this means that comparatively few field lines make it out to infinity, which makes the far-field weaker.

In more mathematical terms, the alternating polarity means that the total magnetic dipole moment of the system is zero (or, at best, very small), which implies that the leading $\sim1/r^3$ contribution to the field away from the system will vanish, and you will be left with higher powers taking up much of the variation. In a log-log plot, this will make the descent steeper.

And, to make matters worse, as you get close to the magnet, you will get near-field effects where the various smaller constituent dipoles contribute nonzero amplitudes which do not fully cancel, so you cannot expect the near-field distribution to be a single power law. If you want a clean single-power asymptotic, you need to be in the asymptotic regime. (But then at that asymptotic regime the signal is much weaker, which means that the signal-to-noise ratio is much worse, and it's much harder to get useful data.)

When you combine all of these things (high near fields, higher-than-$r^{-3}$ asymptotics, bad SNR in the asymptotic region, and challenging statistical handling of the uncertainty at low SNR using the fit methods you mentioned) it is entirely plausible that a naive search for fits (in your case, looking for single-line fits in various log scales) can find a good statistical fit which does not follow from first principles.

Ahhh, the delights of experimental science! You have imperfect data, and a particular model fits. But does the model make physical sense? Could there be another model which (a) is similar to the one you used (to within the noise) and (b) follows from first-principles? Would this unknown alternate model be better? Should you lie awake at night worrying that the model you’re about to publish is nonsense?? Are you going to stand up in front of an audience and present this model which some self-satisfied, grey-haired professor will shoot down with conspicuous glee??? But it fits the data......

Luckily, here the stakes are low, and we know what we’re dealing with. A bar magnet is a magnetic dipole. Its field falls off as $1/r^3$, at least once you’re far away compared to its size. So try fitting with that.

Why might you have gotten decent results with exponential decay? Well, $1/r^3$ and $e^{-r}$ don’t look that different from each other over an appropriate range. And who knows? Maybe your experiment was over that very range. And then there’s noise! Sometimes only one or two noisy data points throw off a fit (just by chance!) if you don’t have a lot of measurements. That’s science!

As has already been answered by @Gilbert, a permanent magnet can be considered as a magnetic dipole, and the leading term in the dipolar field decreases as $1/r^3$. This power law dependence is hard to distinguish from an exponential one $e^{-\alpha r}$.

Let me throw in a few experimental/data analysis tips: the power law would be best seen on a log-log plot: $$ y=r^{-\beta}\longrightarrow \log y = -\beta\log r, $$ and the rule of thumb is that onr needs a data over at least four decades to ascertain that it is really a power law (i.e., changing $r$ over four orders of magntitude.) Note that you still have to be sufficiently far from the magnet, to consider it as a dipole.)

16
The error of the natural logarithm